The US Debt Ceiling: Does it matter this time?

The US government is approaching its debt ceiling, raising the prospect of the US defaulting on its debt if the limit is not raised. Markets have looked through it in the past. Might this time be different?

Every so often Washington DC has a ‘debt ceiling debate’. For most market-watchers (and most Americans) it’s a cringe-worthy period of political grandstanding that always ends up with the same result i.e. the debt ceiling being raised. So what’s the big deal?

Does the debt ceiling matter?

Investors with a longer holding period will probably do well to pay little attention to the US debt ceiling. There are many other much more significant considerations, expected 5-years returns for a stock market that has doubled in 12 months being front and centre.

For short term traders, as much as they might want to do otherwise, it is probably wiser to stay abreast of debt ceiling news in case it causes some extra market volatility. Arguably that volatility, helped by other factors has already started to manifest, seen in things like the rising US dollar and 5% correction and quick bounce back in the S&P 500. 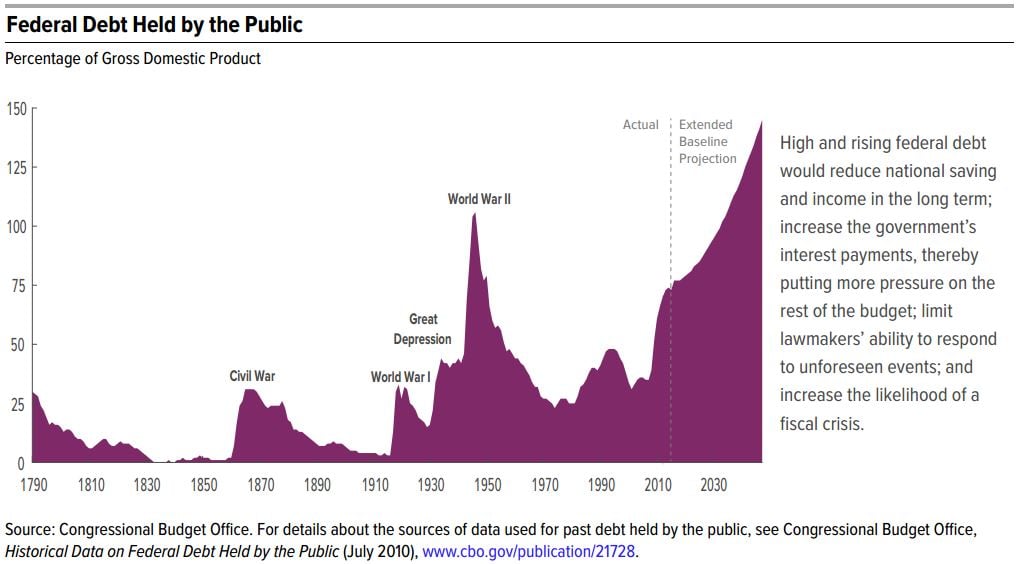 What is the Debt Ceiling?

The debt ceiling is cap on the total amount of debt the US government can accrue.

The concept of the debt ceiling or at least some method to limit government spending makes sense. However, its implementation is a shambles - so much so that many politicians regularly call for its removal altogether.

What’s happening with the Debt Ceiling?

On September 21, Democrats in the House of Representatives voted for a bill to extend existing spending levels and suspend the debt ceiling through 2022. This was blocked by House Republicans.

It’s no coincidence that the latest debt ceiling debacle comes in late 2021 ahead of the US Mid-term elections in 2022. Democrats are in power so they want to give away freebies before people cast a vote and after 4-years of tax cuts and spending under Trump, Republicans want to show voters they are now fiscally conservative again.

Avoiding a government shutdown without lifting the debt ceiling

Will the debt ceiling issue cause market volatility?

An interesting thought upfront - if the government does shutdown, it will affect the agencies that collect data for the monthly statistics like non-farm payrolls. If these agencies are not running, then the Fed will be heading into its intended November tapering blind.

When could markets start getting worried?

On September 28, US Treasury Secretary Janet Yell told lawmakers that the US would run out of cash top meet its obligations by October 18. This is an estimate but it’s a good a date as any for the markets to know when its time to start getting worried.

The last couple of occasions the debt ceiling debate came up, there was only a few days of tweets by President Trump before it was all agreed. It does appear this time, with President Biden in place - that Republicans are going to take it down to the wire.

If the deadline is Monday October 18th, markets could get rocky on the Thursday and Friday of the week prior - that’s October 14th and 15th.

The debt ceiling will get raised

As we said at the start, the debt ceiling must get raised - the US defaulting on purpose is unthinkable. This knowledge might be enough to stave off any market volatility but if we get too close to Yellen’s deadline, risk managers will be forced to take precautions.

Precautions might include hedging - S&P 500 puts as well as flights to safety into things like gold and the Japanese yen - possibly even Bitcoin. It was in 2011 that we last saw a major debt ceiling debacle that even saw the US get its credit rating cut. It’s in the hand of politicians whether we get a repeat or worse - which adds to the risk factor.