The price of Bitcoin has just struck a 5-month high. A lot of the optimism centres around the possible approval of a Bitcoin ETF in the United States this year. But are the SEC really ready to approve one?

The largest cryptocurrency by market cap has snapped back furiously from a dip under $40,000 in late September, in part over expectation for the first US Bitcoin ETF.

At the same time Bitcoin recovered its $1 trillion market cap, which has become synonymous with positive sentiment in the crypto market. 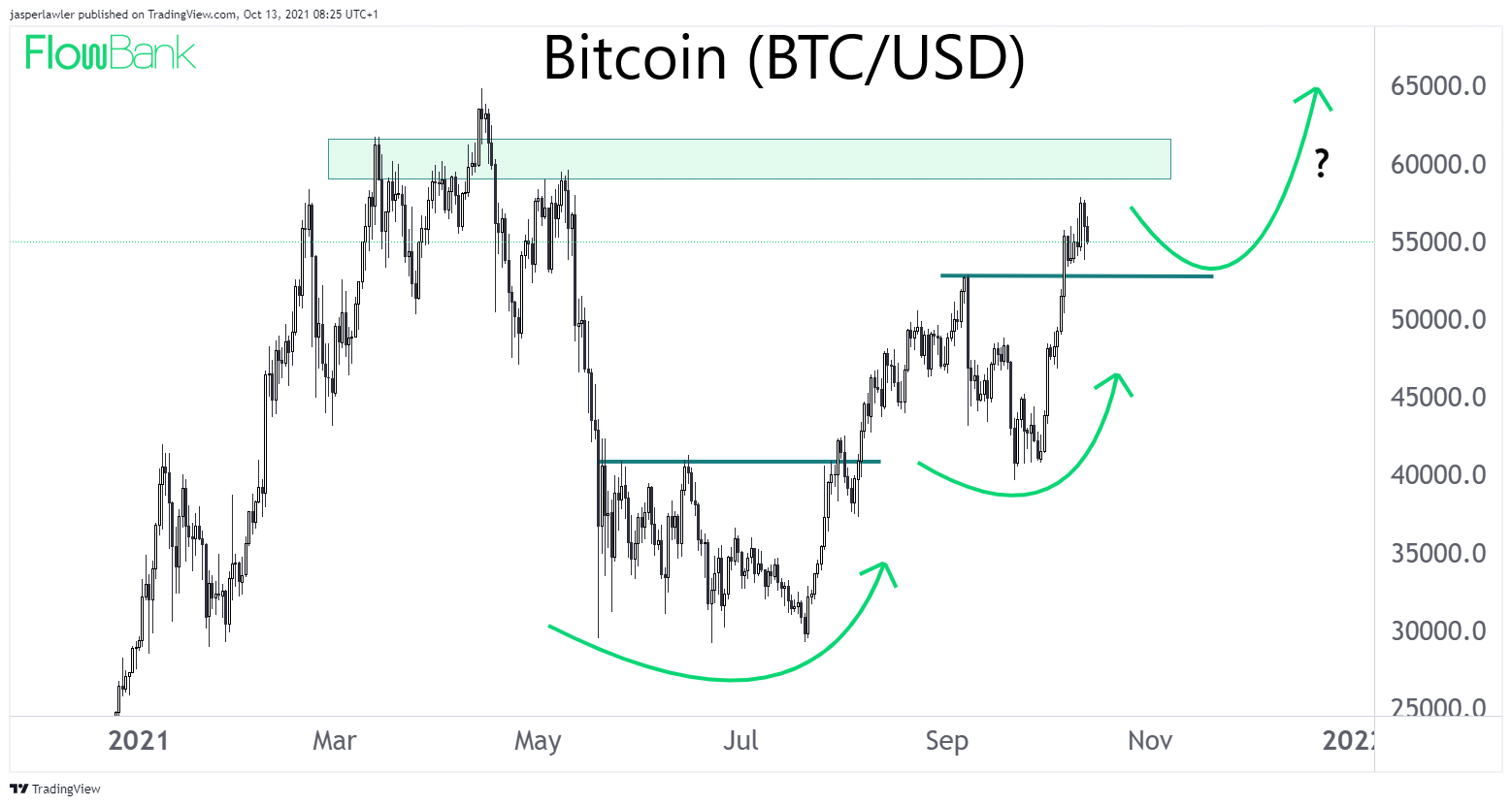 The price has been steadily unwinding the 50% haircut that took place in April through May and could be set for new all-time highs if the current momentum continues.

Why has the Bitcoin price been rising?

Confidence has returned to cryptocurrency markets with confidence seemingly concentrated towards Bitcoin rather than the wider altcoin space.

The best explanation for this renewed appetite for Bitcoin likely stems from the possible approval of a Bitcoin ETF in the United States, perhaps as soon as next month.

Reminder: What is a Bitcoin ETF? It is an exchange-traded fund, shortened to ETF. It is a type of investment fund that tracks the price of an underlying asset, such as a stock index or gold. A Bitcoin ETF would have Bitcoin as the underlying asset. ETFs are cheaper than mutual funds and trade on the stock exchange, making them more accessible to the wider investing public. It’s for this reason that a Bitcoin ETF has been so heavily associated with greater ‘Bitcoin adoption’ and by that virtue a higher Bitcoin price.

NOTE: Outside of the US, including in Switzerland, the EU and Canada, a number of Exchange-traded Bitcoin and other crypto asset products are already available. That includes ETPs from the likes of Coinshares as well as ETFs, closed-end funds and a crypto ETN. The FlowBank crypto-asset offering is best in class.

There are now several companies that have applied to the SEC for approval to offer a Bitcoin ETF in the United States. The SEC extended the deadline of four BTC ETFs for 45 days.

In September, Van Eck’s physically-backed Bitcoin ETF was delayed for the second time this year until November 14.

The SEC is still kicking the can down the road by delaying all applications for a Bitcoin ETF. There are several reasons for this that centre around fear of market manipulation on unregulated cryptocurrency exchanges. But it appears to be headed in the direction of approval.

The SEC recently approved the Volt Crypto Industry Revolution and Tech ETF in the United States - which tracks a basket of stocks with high exposure to Bitcoin. SEC Chair Garry Gensler has hinted that a Bitcoin futures ETF might be the next baby step towards approval of a spot Bitcoin ETF backed by physical Bitcoin.

However, any approval happening this year has some big hurdles to jump, possibly setting up some disappointment in crypto markets. As we see it, the three big ones are:

ETH/BTC has been caught in a horizontal trading range between 0.055 and 0.08 and is currently testing the bottom-half of the range. 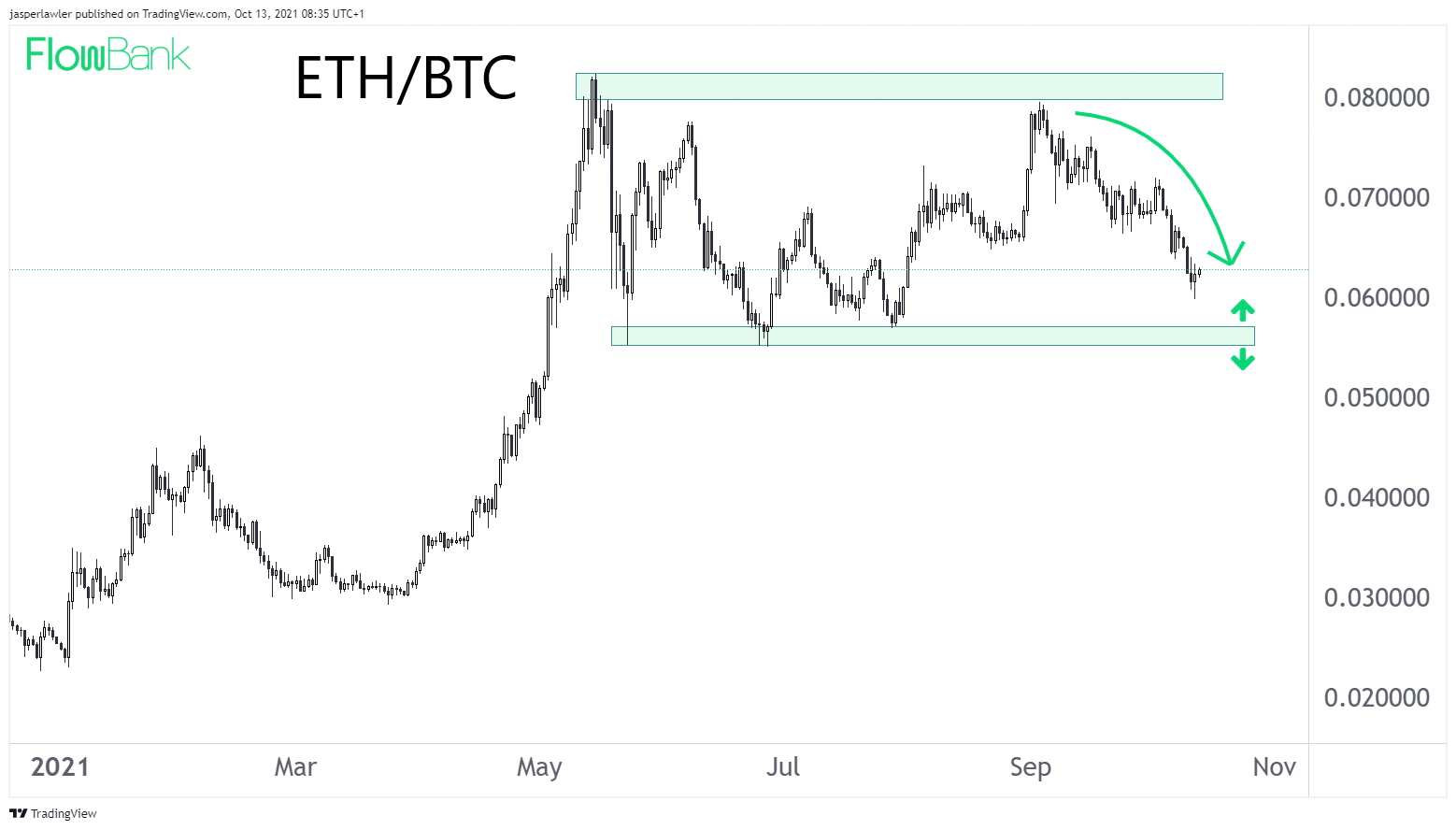 The Bitcoin Hash rate has normalised since bottoming in July but has not yet recovered the peak near 200M. The Bitcoin network is not as big as it was, but should the price hit new ATHs, the hash rate would be expected to follow suit.

The ban on mining in China continues to hold back activity but the hash rate recovery shows miners are redeploying elsewhere, suggesting it needn’t be a long term issue for Bitcoin.

The flows into cryptocurrency exchanges has chopped above and below the zero level throughout the Bitcoin price pullback over the past few months. As price has broken out in the last week, flows to exchanges have turned positive again.

The takeaways for Bitcoin

How to trade Bitcoin ETFs

As a reminder, there are Bitcoin Exchange-traded products already available outside of the United States. You can find more information about the several cryptocurrency assets offered by FlowBank on the FlowBank website or by contacting customer support.