The US dollar has been battling higher this week with DXY rising back through the key 90 big figure and EUR/USD down 200 pips from a 2-year high. Is there more to come?

The US dollar has gained for three days in a row, something almost unheard of since it embarked on a new downtrend at the start of November. However, the bigger picture downtrend remains in place, with the buck well off the highs achieved in March last year.

A rise in US Treasury yields has now started to pull the dollar higher. Yields have been rising since the end of the summer and all the while the dollar was been falling but the velocity of the recent spike above the key 1% in US 10-year Treasuries has caught the attention of dollar bulls. 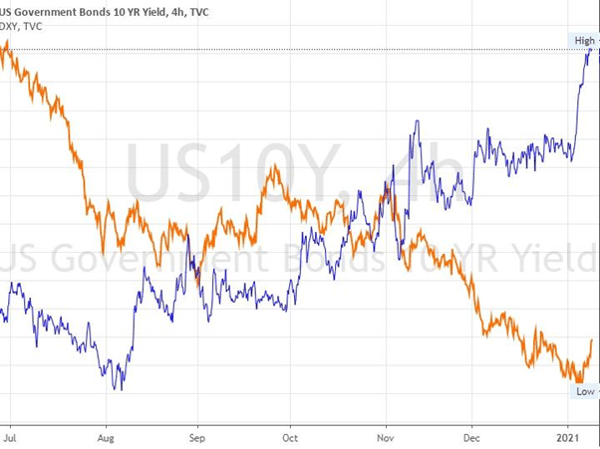 The rise in Treasury yields occuring at a faster pace than German bunds, JGBs and gilts has dragged yield spreads wider after months of narrowing. Carry traders are rethinking the dollar as a funding currency. 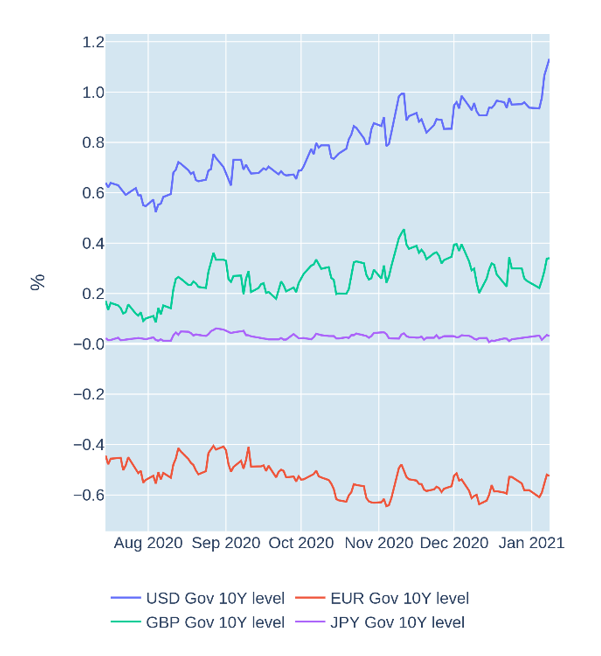 By comparison the EU has agreed its own joint ‘EU Recovery fund’ but the money involved is much less than in the United States. Naturally if the US grows faster than Europe, Japan and other developed nations over the coming year and experiences greater inflation, a rate hike would be closer in the United States and that would lead to dollar-strength.

The Fed has also played a part in this pickup in the dollar. In fact, the Fed maybe the critical difference for the dollar’s new bullish interpretation of rising yields. The dollar began to bottom out after Fed minutes surprisingly revealed a discussion of tapering asset purchases. Since then two voting members of the FOMC – Thomas Barkin and Rafael Bostic have openly discussed the idea of tapering this year if economic circumstances warrant it.

The Fed will want to give markets plenty of warning that asset purchases will be tapered and this maybe the opening salvo. Fedspeak is the preamble to the offical change in forward guidance.

The Fed have two countervailing forces to weigh up. Lower rates are needed to make the issuance of more debt by a Democratic Congress affordable. The markets have been assuming that with Janet Yellen as Treasury Secretary, the Fed would go along with what the Treasury wants – namely to buy its debt and keep rates low. Fed officials must know that this path leads to direct monetary financing, the erosion of central bank independence and possibly even MMT. The most recent language would suggest the Fed may be looking for fiscal stimulus as a way to put the brakes on its own stimulus and maintain its independence- that goes counter to the current market exuberance.

For now the technical trend in the US dollar remains very much downwards and the promise by the Fed to keep asset purchases in place for 2021 and rates at zero through 2022 would appear enough to cap any dollar rallies. But beware the Fedspeak, which if talking of tapering and even rate hikes continue, might help this small dollar rebound become a bottom.