Nobody can argue that the first half of 2021 has been one of the most exciting (excessive?) times for investing in recent memory. Here’s a rundown of the top 5 investing bubbles and busts in H1 with a preview for H2.

Probably the two single biggest contributing factors to investing so far in 2021 (that got a start in 2020) are Government stimulus the involvement of the retail investor (that’s you and me!). Together they underpin a lot of the bubbles we list below.

Retail: Without a suite of investment analysts to backup investing decisions, retail investors have discovered the power of collective research and trading. The focal point has been the #WallStreetBets forum on Reddit, but it comes in many forms including forex Telegram groups and crypto Twitter influencers, not to mention the FlowBank Livewire.

Stimulus: Making the retail investor boom possible, has been the so-called ‘Fed Put’. Retail investors have now interpreted the message, which has been understood by institutions since the 2008 crisis – central banks have your back so just keep buying the dip! Intuitively everybody knows it must end badly but still, you don’t fight the Fed!

In the age of social media, a story can be conveyed in a meme – in fact, lots of memes! Small investors, inspired by stories on social media and funded by stimulus checks have been heavily involved in stock markets this year.

The best investing hypothesis put out on Reddit has been the short squeeze! The ultimate examples have been GameStop (GME) and AMC Entertainment (AMC). Both companies had unloved stocks, dismissed as the wrong side of innovation – specifically mobile gaming and streaming. Hedge funds took the hypothesis and went short these stocks. The trouble was that they went so short that they were ripe for a short squeeze. The result was a 3000% gain for AMC and other crazy returns for other meme stocks.

By now AMC and GME have priced in years’ worth of doubtful earnings, so there might not be much more left in the tank there. Also, the most obvious short squeezes have been exhausted so the success of that trading strategy in 2021 will be hard to repeat. BUT we think the genie has been let out of the bottle for trading on social media and collective research. Stocks with the best memes still stand to have a good 2021. The only thing that can put it back in the bottle is a good old-fashioned bear market.

Read the piece we wrote about Collective Hedge funds at the time.

The first half for crypto was really a story of two halves (quarters!). A huge rally in Q1 saw a big reversal in a matter of days in Q2, leaving Bitcoin up 18% at the end of H1. The rally was inspired by crypto influencers, some big companies adopting cryptocurrency and warm words from institutional investors towards Bitcoin. The sell-off was a combination of billionaire Elon Musk talking down Bitcoin’s environmental credentials and the increased threat of crypto taxation in the US and regulation in China.

The emergence of DeFi and NFTs means cryptocurrency investing has diverged into almost two camps, those coins that provide a utility and Bitcoin, which can act as a store of value and/or currency. Still, both investing cases came crashing down together in May. Unless Bitcoin is specifically singled out by governments, BTC/USD is still central to the performance of the crypto-sphere, in our view and $30k is the make-or-break price level.

Non-fungible tokens emerged as a new investment vehicle, even asset class in 2021. Beeple’s NFT artwork sale for $69 million was the real game-changer that electrified the space. Since then, NFTs in art, sports and even finance have sold for jaw-dropping numbers. There is not quite enough liquidity to judge individual NFT performance but the space has gone a little quiet in recent weeks. 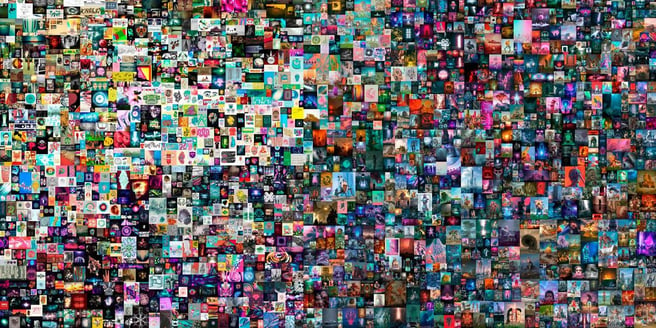 There is a micro and macro view to be had for NFTs, like any investment. On a micro level, people are giving digital assets value, especially when it is something intangible that might not otherwise have been able to be bought or sold. This is a reason to think NFT sales can only go from strength to strength, providing a lot of opportunity along the way. On a macro level, the biggest risk-factor for NFTs is that they fit under the ‘everything bubble’. Put simply, when stock markets next undergo a major correction, its likely NFTs will lose value, and some will never regain old price highs.

SPACS have been around a while but really came of age this year. Keen to take advantage of strong financial market conditions and investor confidence but without the expensive IPO roadshow – companies have increasingly turned to going public via Special Purpose Acquisition Company. 353 companies had SPAC IPOs in 2021, up from 248 in 2020 and 59 in 2019. 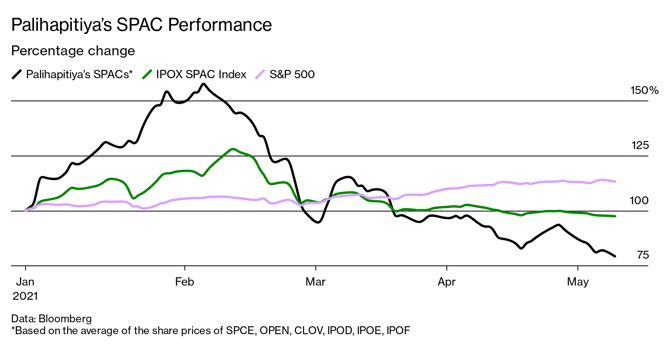 The sheer number of companies going public via SPAC so far in 2021 means there is likely to be a slowdown in H2. BUT that’s the US. Increasing numbers of European and Asian companies have been turning to SPACS, which could keep the boom going. If you are investing in SPACs, make sure you understand the specific T&Cs – and monitor the performance of shares that recently went public via SPAC for a guide on investor sentiment.

Actually, it was not just lumber – it was all commodities - but lumber was the most extreme. A supply shock following 2020 lockdown policies alongside massive demand for housing coincided to send the price of wood flying. The price of lumber reached a massive $1670 per thousand board feet in May – up 350% from $420 pre-pandemic. 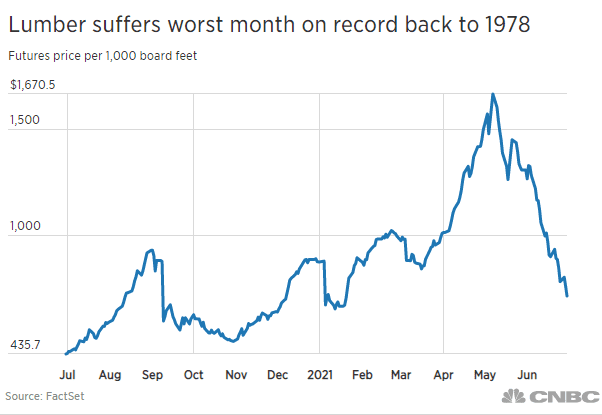 New mortgage applications and building permits are already coming down substantially, so it looks like the high input prices, including lumber, have taken some of the steam out of the US housing market. Low mortgage rates suggest housing demand can continue to rise for the rest of the year but the expanded production at sawmills and a moderation in demand means lumber prices should level out above 2020 levels. The biggest risk probably comes from the government response to the pandemic, including new variants – and what that does to the supply of commodities.