San Francisco is the mecca of online lending, and so it is no wonder that we are seeing Upstart successfully raising cash in the public markets. Upstart is the FinTech company leveraging Artificial Intelligence and Machine Learning technology to improve consumer access to credit.

Upstart recently filed its IPO last Tuesday opening around the $20-22 range. The price soared to about $47 which means the firm raise $180 million. Upstart was well positioned for its IPO: the firm's revenues tripled between 2017 and 2019 and saw positive net income figures this year, see graphs below. This rings a similar bell as the Tesla's story  in that both companies began to see strong positive figures in key metrics in 2020 and now the sky is the limit. Founder Dave Girouard states the key reasons for the IPO being that the 1. technology is mature, 2. the business is going into auto-loans, and 3. cashflows are strong as of 2020.

Upstart, founded in 2012, started as a data company focusing on predicting risk and only in 2014 became a peer-to-peer lender. Upstart funnels borrowers to banks. Unlike Lending Club, they only fund about 3% of the consumers on their platform, and that is mostly for internal analysis and R&D.

Upstart founders realized that the risk levels for handing out loans were actually much better than expected, that more people should get access to credit, and that there was a market inefficiency in distributing consumer credit to 'low-risk' folks.

Some context; this is also 5 years after the 2008-2009 sub-prime disaster that led to social backlash on operations like Asset Backed Securities and issues concerning lending money to immigrants. Upstart in the end embraced the old world to make a new more accessible one for consumer loans.

Securitization in the online lending space

Lending Club, SoFi, OnDeck, FundingCircle, Greensky, Opportun, Bond Street, Prosper, Upgrade, etc, make money by pooling the loans they originate (most do if not all), and selling them in packs with nice coupons to institutional investors (Hedge Funds, REITs, Banks...).

This operation is called a securitization, and is how the online lender capitalizes on the loans they originated-- the actual technology does not generate money on its own, it mainly serves to optimize a borrower base through the company's proprietary selection criteria. In the case of Upstart however, they cash in by licensing their technology through a white label to banking institutions. Smart product differentiation move. They work closely with Cross River Bank and other banks instead of being one themselves. This allows them to charge their partner banks fees and unlever their balance sheets.

If you are interested in knowing more about securitizations, the 'deals' are public so you can analyze them through the rating agencies (Moody's, Fitch, Standard & Poor's, KBRA). This is a good way to see who has the biggest balance sheet in the space, and who revolves the agency's door the most. As an example, Upstart issued a deal in September 2020 called ''UPST 2020-3'' worth $269.5 million. The weighted average rate and FICO were 16.27% and 691 respectively. Upstart is after all active in the securitization space too.

Compared to players like Lending Club who showcases a much lower FICO on average, Upstart takes less credit default risk and charges higher rates. Their minimum FICO score requirement is advertised at 580, but knowing the deal was closer to 700, Upstart probably originates at 580 rarely and if they do, it is someone who just moved to town, got hard credit checked about three times and has student loans to consolidate (meaning not a very risky borrower).

Upstart leverages AI and machine learning to build algorithms that automate and speed up the lending process, and not a lot of firms do this right now. Most online lenders have some type of algorithm for borrower selection, or for recycling worthy, but not yet prime borrowers. However, they are all mostly behind in what is their 'underwriting APIs', unlike Upstart.

Upstart's operating advantage is in the speed at which it can determine an applicant's quality and the rates of default which they are not shy to boast about on their website. This is a big deal for an online lending business because defaults make investors suspicious and reluctant to come back and buy a second batch of pooled assets, a problem Upstart does not have.

Upstart market capitalization is around $3.5 billion. With a company as young as Upstart, the fundamentals are probably not so significant yet, but here are some figures to give you a taste of the last couple of years and what's to come going forward.

As evidence of recent performance, Upstart shows an increasing trend in total revenue over the past couple of years. Until this year (which was filled with economic dislocation) Upstart pulled through and showed positive net income figures meaning that it is operational and not losing money.

Upstart is one of the bigger players in the public scene, and being a younger firm with room to grow is a positive sign. Greensky could be the best performing firm this year in terms of revenue and positive net income figures while Prosper and Upstart look very similar.

Mind you that the following pie chart is comparing similar public companies. Some large players competing in the same space are private firms and will not figure below. The market share Upstart seems to have below is larger than it actually is. 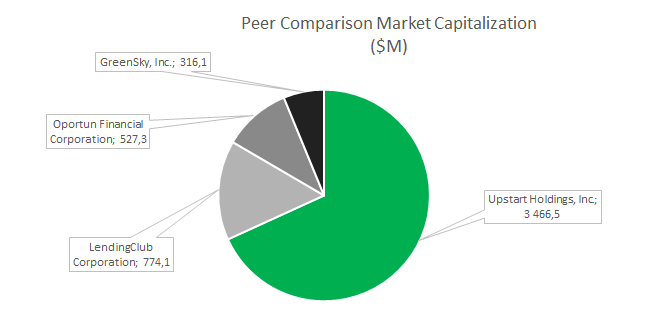 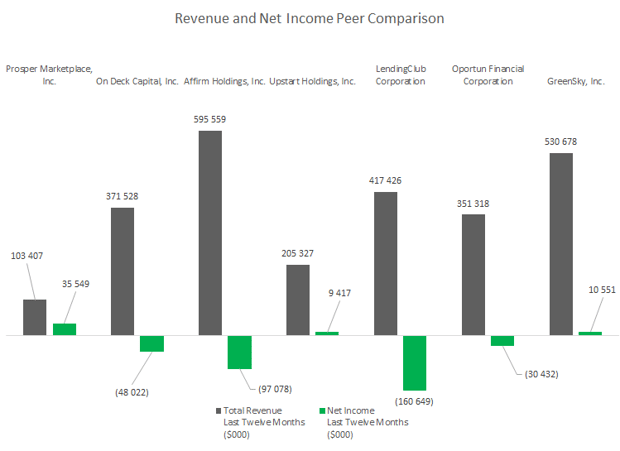