A 17-year-old dispute between Boeing and Airbus ends in a deal unlocking billions of dollars in transatlantic commerce. The US and EU team-up to slow down Chinese commercial aviation industry. A look at European stocks as a result of the deal.

It has been 17 years since the two aircraft giants have seen eye to eye. The family feud began in 2004 when Airbus overtook Boeing in deliveries for the first time. This, Boeing could not allow. They contested.

“It’s unfair! They are doing better than us because of state subsidies”, decried Boeing executives. While this was true, Airbus chiefs countered the offence: “But Boeing receives unfair US tax breaks! How can we compete with that?” The World Trade Organization (WTO) steps in and attempts to slow down the fire, in vain.

Skip to the Trump era. The WTO allows the US to stamp on $7.5B of tariffs on EU goods (including the cheese we love, the wine we need), and the EU responds with $4B of tariffs on US goods (the Harley-Davidsons we cherish).

But during the pandemic the winds change. President Biden is elected, he goes to Europe, he signs a deal repealing tariffs with a 5-year suspension clause. US-EU have a common ally in trade, and their foe, is China.

With tariffs tapering off, the Airbus-Boeing duopoly enters a new phase. Both nations agree to stop subsidies, tax breaks, an anti-competitive R&D funding. The two firms agree to walk away from WTO actions, commit to tasking working groups to net out the details, and agree to cooperate against a rising Chinese commercial aviation threat.

Boeing is one of America’s most impressive enterprise. It has been around for more than 100 years, it has developed some of the best engineering efforts in aerospace and aircraft technology and has helped the world travel more freely.

But Boeing has suffered many controversies since its golden years. Plane crashes and a Wall Street focused management culture opened the door for quality tradeoffs. After a merger with McDonnell Douglas saw capex cut by 60% by new management, managers and engineers began to diverge, and quality became second to go-to-market speed and earnings calls.

After the 737 MAX enters commercial markets and finds much love from airline companies, controversies pour in around the use of software, a software developed to limit the pilot training time to zero. The software introduces some design flaws, two planes crash in a matter of 6 months, Boeing is under pressure.

Boeing and Airbus compete on orders from airlines, orders for narrow body aircrafts for example. With the known issues around the 737 MAX, and Boeing falling out of some key deals (See Embraer deal failing), the tides have turned.

Airbus now has a product dominance both on the lower tier of the market and the higher end market for narrow body jets. A strengthening US dollar could further benefit the European giant since aircrafts are priced in USD, and Airbus could further gain from Boeing losing engineering reputation and being overleveraged (too much debt). The next graph shows widening spread between the two giants, with Airbus coming out on top.

Right now, Airbus has a current relative advantage over Boeing, who has several challenges ahead. This is made clear by order backlogs, namely that Airbus has 6,979 orders versus Boeing’s 4,983. An improving sentiment on commercial air traffic has helped both firms, and the upcycle implies more profits to come for the entire sector. A removal of tariffs is also good news, as tariffs accounted for 15% of a planes’ cost. 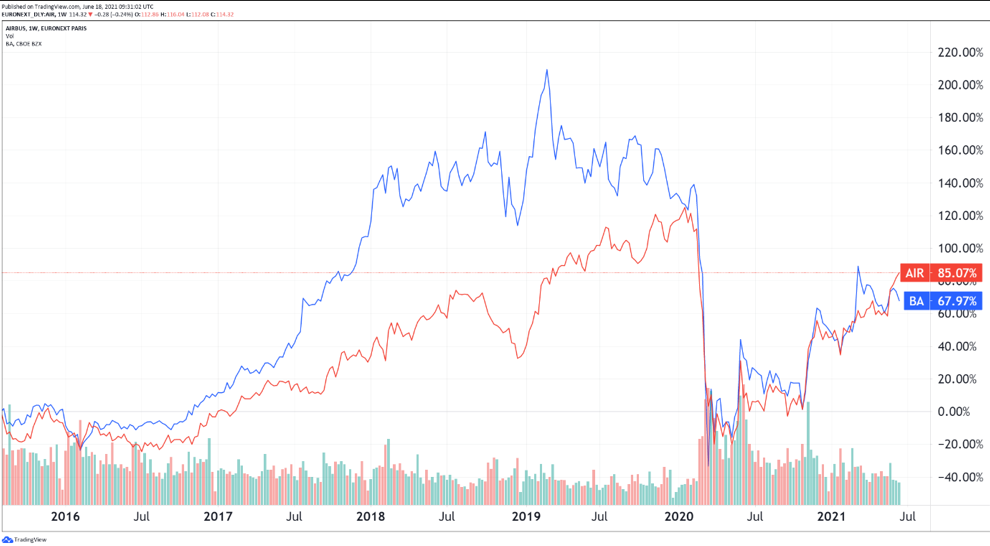 Big used to be synonymous with America but China may just be appropriating the term and all fronts.

The trade dispute ending is partly driven by a threatening force from Chinese aircraft and aerospace manufacturers namely, a company called Comac (Commercial Aircraft Corporation of China). There are several things at play with regards to Chinese commercial planes worth knowing:

Experts in the domain state that while Comac successfully developed a narrow-body jet called the C919, that plane is not really ‘’Chinese’’, so to speak. Comac still relies on Boeing and Airbus expert knowledge of airplane parts, parts that are incredibly hard to make, parts that need to be perfect every single time, that need to work year after year.

Not being independent to build its own commercial aircraft is an issue for China, who hosts the world’s largest commercial flight market. The Chinese government is keen on building its very own fleet for commercial aircrafts and capitalize on its potential. This means subsidies ahead. While Boeing and Airbus are seeing this as a threat, the reality is that a pure Chinese fleet will be hard to take shape for quite some time, some say 10 years, but we should not underestimate the Chinese.

Europe and America joining forces might not stop China from building its own industry, but it could help them become more competitive on price, something that could slow down a Chinese infant aviation industry, an industry still looking for parts from the West. The graph below shows that China makes up a big proportion of commercial jet usage, but that its two top planes are Airbus and Boeing made. Market dominance is a clear long-term moat for the duopoly. 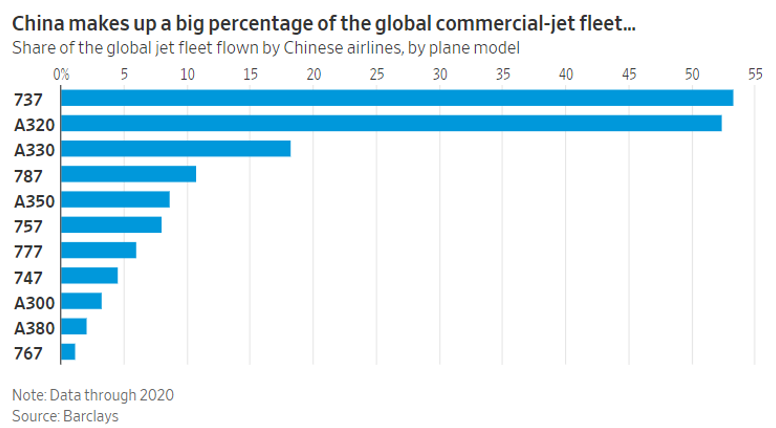 Will the deal help the European stock market? The next graphic shows that based on its forward earnings, the Stoxx Europe 600 index trades at a discount of about 20% relative to the S&P 500 Index, and when we compare to book value, we see a 50% discount. A trade dispute coming to end, could revitalize billions of locked up money, lost cash from tariff-driven deadweight losses. 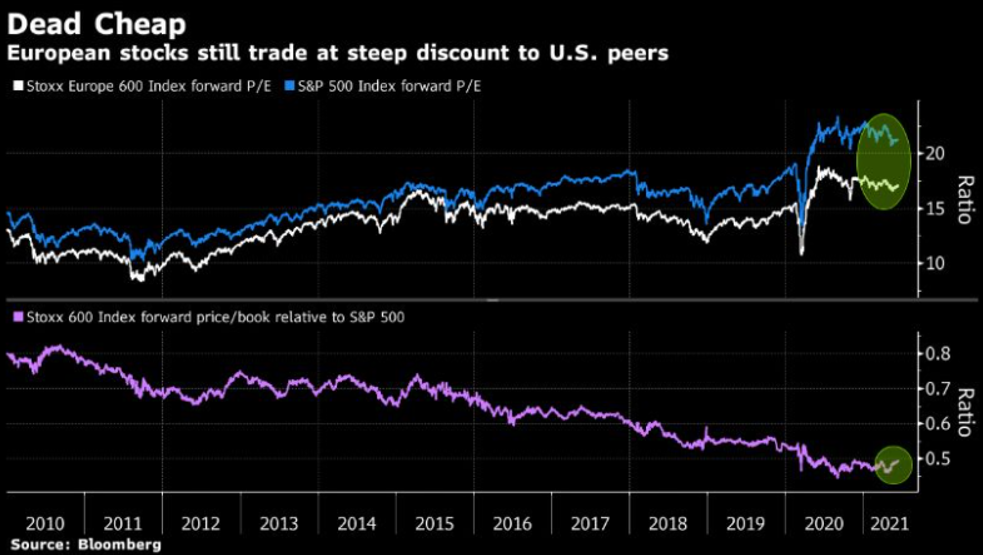 With trade disputes grounding, it is easy to feel bullish about European markets. The French government, led by Macro, is also keen on further boosting the French tech market, a covid-recovery is improving across the board, and small businesses are reopening. European stocks are on course for a fifth straight week of gains, mainly on the hope of a recovery trade narrative.

On the other hand, inflation and central bank action takes center stage lately, and stains a fully bullish European outlook. Europe is concerned over rising inflationary pressures as well as the possibility of early tightening of monetary policy. Producer price indices in Germany are soaring, UK retail sales unexpectedly fell in May, post-Brexit tensions continue.

On the US side, the Federal Reserve has just signaled a shift in its stance on inflation. After inflation data came in unexpectedly strong in recent months, the fed earlier this week announced it would soon start discussing when it will taper its bond purchases. As a response, markets responded with moves across asset markets with investors liquidating inflation hedges and fading reflation trades.

Natural resources suffered from a recent reflation trade unwind, value stocks fell, small caps too. On the other hand, a fading chance that the Fed will let inflation get out of hand helped long-term US treasuries, highly rated corporate bonds, the US Dollar, and Big Tech.