US had its first IPO from a Chinese company since October

The flow of mainland companies to New York came to an abrupt halt last summer, after the US Securities and Exchange Commission halted approvals of Chinese companies’ IPOs until they boosted disclosures about the regulatory risks. Many people expect Meihua's successful IPO of last week could offer a path for other hopefuls from China. But is that so?

Meihua International Medical Technologies (MHUA) is the first China-based company to list in the US since last June, after Didi Global’s IPO sparked a regulatory backlash. The medical device maker announced plans to raise USD57.5 million and had to submit amended filings to beef up its initial caveats about potential risks faced by investors. On the day of its IPO, Meihua sold 3.9 million shares, fewer than it had originally proposed, for USD10 each, raising USD39 million. In the market, shares opened at USD9 and climbed more than 50% to USD14.20 on Wednesday.

Late June, just days after ride-hailing service Didi had its IPO in the US despite Chinese objections, China’s regulatory authorities shocked investors by announcing a cybersecurity probe into the firm. Shares tanked and the company was banned from adding new customers. This marked the beginning of a broader crackdown that wiped more than USD1 trillion in value from US-listed Chinese stocks. US-China tensions have not shown much improvement and regulatory risks remain elevated for Chinese companies.

Since then, Beijing unveiled extensive new rules governing overseas share sales by the country’s firms to prevent the leakage of sensitive data. New rules by the Cyberspace Administration of China require a security review of all platform companies with data on more than 1 million users before they list overseas. Chinese firms in industries banned from foreign investment will need to seek a waiver before proceeding for share sales. Similarly, overseas investors in such companies would be forbidden from participating in management and their total ownership would be limited to 30%, with a single investor holding no more than 10%. Many analysts believe that there’s more to come and this lack of clarity makes it unlikely we witness a slew of debuts anytime soon.

The heightened scrutiny by Chinese regulators has been echoed by their US counterparts. In December, the Securities and Exchange Commission put in place a new law (HFCA Act) that laid out the criteria companies must adopt to avoid delisting in 2024.

Beijing has shown firm determination to prevent overseas share sales of any company whose listing could pose a national security threat. Another key area Chinese regulators may keep an eye on are companies operating at severe losses in new business segments for several quarters or years to achieve status as monopoly. The government considers this as poor allocation of resources, and which could eventually become an excessive cost burden on consumers.

Is Hong Kong an alternative?

After the new rules, many speculate that Hong Kong could possibly see migration of trading activity. Though, the situation is not as rosy as many expect. Lately, HKEx increased the minimum aggregate profit threshold for mainboard listing from HK$50mn to HK$80mn and now requires companies to justify that they have solid fundamentals, good profitability, and growth potential to meet the HKEx’s stringent criteria, otherwise they would have no choice but to delist from the US and seek a “homecoming” listing (only on the A-share market).

From a market perspective, a HKEx-listing would also imply lower valuations and liquidity as HKEx is far smaller than the Nasdaq or the New York Stock Exchange and it does not benefit from a large presence of institutional investors. Even for large Chinese companies like Alibaba and JD.com, the average daily turnover of their Hong Kong-traded shares has been between 20% and 30% of that in New York

In recent weeks, policymakers have softened their regulatory approach, probably in consideration of the disproportionate impact these actions were having on domestic markets. The Nasdaq Golden Dragon China Index has greatly underperformed the Nasdaq and is down 60% from its peak of February 2021. A lack of clarity on listing rules weighs on sentiment. After the blockbuster debuts of companies like Kuaishou Technology at the start of the year, several companies expected to come to market including ByteDance have scrapped or put off their listing plans.

The valuation discount of Chinese internet companies to U.S. peers reached record levels. Chinese peers with market capitalizations greater than $2 billion traded at an average 4.3x forward enterprise value-to-sales on Dec. 6 vs. 5.7x for US peers. Though the gap has narrowed since earlier this year amid a drop in US valuations and China’s vow to step up efforts in guiding capital to be invested in a stable and orderly manner. 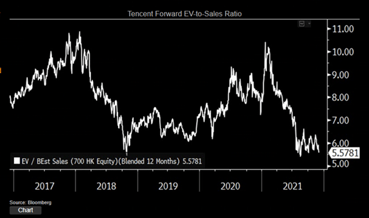 Meanwhile, investors are starting to look beyond China. India, South Korea, and Southeast Asia have become alternative sources of alluring initial public offerings. These markets are busier than they have been historically. South Korean and Indian IPOs have seen attractive returns on average, at 42% and 23%, respectively, and many investors and bankers expect the trend to continue.

We might have seen the worst in the Chinese technology sector. Though, data security and cybersecurity may become more complex as China formalizes its legal environment. Investors looking for opportunities in China's tech sector have to keep in mind the policy priorities of the current administration, particularly when it comes to improving the country's supply-chain security. Although current filings (IPOs) show encouraging signs, they are too small to be of relevance. China needs important market-friendly policies to fully revive US listings.