Loan losses and the need for extra reserves for futures losses as well as trading revenues will be in focus for mega bank Q3 earnings.

3rd quarter earnings reports will be another obstacle for markets to cross before reaching the US election and the end of the year.

Optimism has been on the rise in the first half of October, in part because September saw a steep sell-off - and in part because on the whole earnings estimates are being revised higher. As is tradition, banks are the first to report and they do so this week.

In the second quarter banks set aside huge loan loss reserve for the expected individual and corporate loan defaults that were expected to come because of the pandemic. As such they reported huge losses - but the numbers were saved by some of the best trading revenues in years. Markets had of course gone mad in March and April - with exceptionally high trading volumes that benefited intermediaries. In Q2, the top 5 Big Banks in the United States reported $33 billion in combined trading revenues - their highest in a decade.

Chart: Banks underperform in the recovery

This chart shows that while the S&P 500 is now positive for the year, banks remain heavily in the negative year-to-date. The stocks led in the March decline and have lagged in the subsequent rebound through October. At the bottom of the pile, Wells Fargo has lost half its value this year. 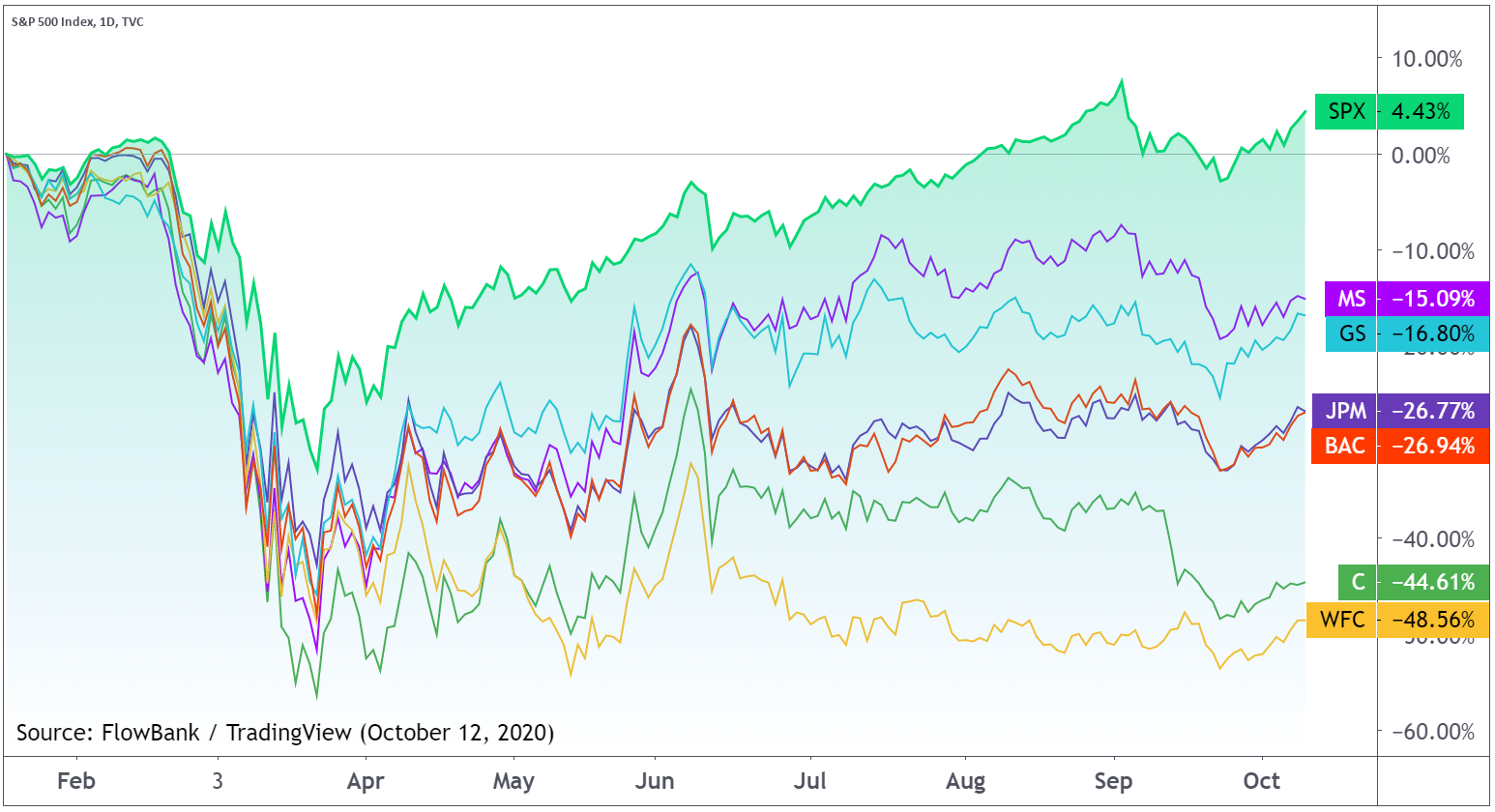 FactSet reports that analysts have the fewest buy ratings for the financial sector- of which banks are a significant proportion- among all S&P 500 sectors. 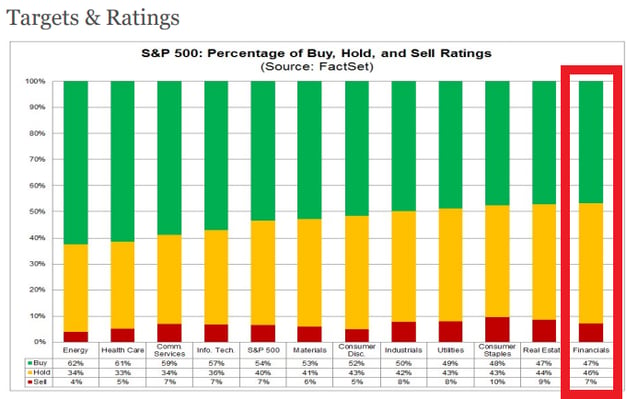 However, earnings in the financial sector have also had some of the highest revisions. In fact of all the eleven sectors - financials have seen the largest decrease in its expected earnings declines due to upward earnings estimates

Since the start of the quarter, the estimated earnings decline for the S&P 500 has decreased to -20.5% today from -25.3% on June 30. Eight sectors have a recorded a decrease in their expected earnings declines due to upward revisions to earnings estimates, led by the Financials, Consumer Discretionary, and Materials sectors.

This will be a quarter when some of the reality could well start to bite for US banks- and we see just how many loan losses have occurred. However, as we mentioned - analysts are of the opinion that the earnings declines will be a lot less than expected at the end of the second quarter. Economic data mostly overshot expectations during the quarter so higher economic activity should mean more loans were paid on time.

Trading volatility remains elevated but nothing close to March and April so the offset for trading revenues should be a lot lower this time around. It’s notable that the banks will the smallest investment arms are those most under pressure.

In Q3 the Federal Reserve said it plans to keep interest rates near zero for over two years - and introduced average inflation targeting - which means rates could remains low - even if inflation moves above 2%. This means net interest margins for banks focused on lending will continue to be depressed.

In addition, banks with the biggest exposure to commercial property and the energy sector - notably Wells Fargo - are also in the crosshair of investors. While the housing market has been booming as people move out of coronavirus hotspots in the city - the lack of footfall in malls, shopping centres and other retail outlets during the pandemic means commercial property owners are not getting all their rent. The Shale oil patch has seen more Chapter 11 bankrupt[ty filings since oil prices briefly turned negative and remains depressed near $40 per barrel - less than many of these firms needs as breakeven level to justify production.

Banks remain in a difficult spot but a faster than expected US economic recovery in Q3 means results will likely not be as bad as thought 3-months ago. The question is whether that small improvement will be enough to encourage some more buy ratings and little more positivity towards the financial sector overall.