Was the relation trade overhyped?

The reflation trade has been at the forefront of every debate over the past few weeks. The idea is that with a successful vaccine rollout, pent-up demand, an intense fiscal stimulus, and a central bank willing to let the economy run wild, the economy will reflate. Now at the half point of 2021, can we assume results have met those expectations?

What is behind the reflation?

Early 2020, the entire world was shaken up amid the Covid-19 pandemic and governments declared a state of health emergency. As a consequence, almost all establishments such as non-necessary shops and restaurants were ordered to close. Only necessity services and corporations received the right to continue their activities. Concerning what happened next, you all know the narrative; the outbreak led to millions of unemployed, interest rates reached rock bottom, and trillions were spent in stimulus. The pandemic translated into uncertain future economic conditions partially due to business closures and lockdowns, which made households accumulate excess savings. All combined effects looked like a recession that reflation could resolve.

Reflation is a policy that is enacted after a period of economic uncertainty or a recession intended to expand output, encourage spending, and limit the effects of deflation. Reflation policies usually include several strategies, one of them being a reduction of taxes. The latter makes corporations and employees wealthier in hopes that the extra money will boost demand and goods’ prices, thus reinjecting the money into the economy. Another way of encouraging people to spend more is by reducing incentives to keep capital in savings accounts, thus lowering interest rates, and investing in large projects to boost employment. Finally, to generate more investment, central banks make the cost of money fall by lifting the amount of currency and other liquid instruments.

The role of inflation in slowing the reflation trade

Reflation and inflation although being similar are in fact quite different. Reflation occurs when an economy is striving to achieve full employment and growth whereas inflation takes place during a period of full capacity. Nonetheless, inflation often results from a reopening trade. Indeed, Covid-19 led to a lot of supply chain disruptions caused by shortages such as with computer chips, which made costs of production rise. What happens when costs increase? Prices go up. The current rise in prices reflects higher demand. Indeed, as people are getting vaccinated, restrictions are being lifted and trillions are spent in federal pandemic relief, the consumer-price index increased by 5.4% from a year ago. However, a rising CPI can cause a slowdown in recovery as it means that households must spend more to maintain the same standard of living. That combined with unemployment can be harmful to the economy. 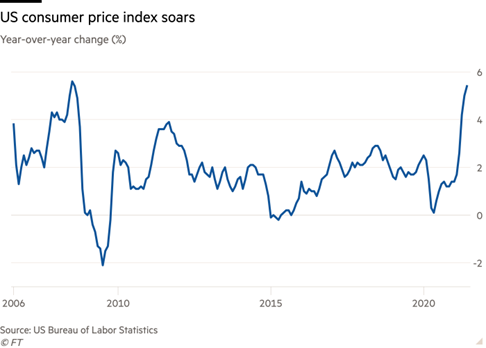 Covid-19 significantly impacted the labor market leading to labor shortages. As of March 2021, the United States was still down 6.8 million jobs compared to June 2020, the month before the pandemic hit, according to data released by the Labor Department. Janet Yellen, Treasury Secretary, believes that the economy may return to full employment in 2022. Until then, the labor market is struggling to recover because there are less incentives to go back to work, which is staining the U.S.’s growth expectation. However, this could be posed to change as stimulus and unemployment benefits stop, hence pushing workers back to work.

Why is the trade being reconsidered?

The first announcement of effective coronavirus vaccines alongside Donald Trump and Joe Biden unleashing trillions of dollars of stimulus were the big initial catalysts. Monetary and fiscal policies were being set up as the economy was believed to take off. However, investors’ optimism over economic growth has rapidly faded as the propagation of the Delta variant is threatening to undermine the progress that countries have made to end the pandemic.

The uplift to growth from reopening has been reduced after even the most successful vaccination program (in the UK) has not been sufficient to stop the Delta strain from proliferating making people voluntarily social distance. Adding to that, the fact that chip supply chain disruptions are still not solved could hold back industries such as tech and car manufacturing from seeing higher margins. These elements are making investors question their initial expectations about a quick recovery.

What were the expectations on the trade itself and are they being met?

The reopening was expected to bring a rotation into value over growth stocks. Indeed, generally after coming out of a recession, value stocks are a better investment. Companies that have earnings more closely tied to the strength of the economy are expected to grow faster when an economy recovers, having taken the biggest hit in the downturn. They are seen as reflationary winners. From September 2020 through to the end of April, the Russell 1000 Value Index has gained 31.2%, more than double the 14.4% return of its growth counterpart.

However, due to all the stimulus and vaccines campaigns, the coming out of the recession phase went really fast and growth stocks are now being considered more reliable and less correlated to the economic cycle. Thus, initial expectations are not met, and investor’s strategies are disturbed up. We are seeing a rotation, to the growth rotation

Nasdaq vs Russell ratio is back to November levels when the rotation was at the heart of every strategy. Several weeks ago, Tech holdings experienced a sell off as the chip shortage and the rotation into value was beginning to happen, but it seems like people were chasing the wrong long. Tech seems to be the spirit of the day, zeitgeist of the quarter. 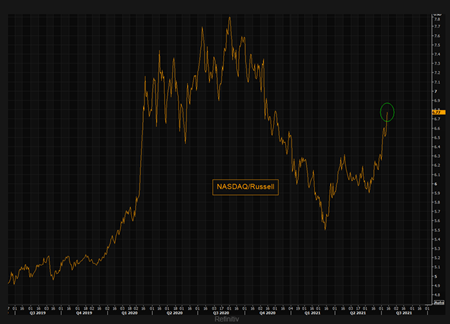 Another expectation was a rotation out of risk-free assets like U.S. governments bonds and treasuries. Yields were expected to move higher, even to reach a pre-covid level and bond prices were expected to fall as greater yields are associated with weaker equity returns. This usually happens when the stimulative policy aims to higher growth expectations. However, the yield on 10-year Treasuries declined.

How to play the verdict?

Investors’ first planned strategies for the recovery of the economy can be subject to a review as the initial trade is being reconsidered. Secular growth stocks should be reexamined, and investors may want to tilt away from financials and industrials. Those two sectors are more sensitive to the vagaries of the economic cycle, thus making them riskier considering a slowdown in economic recovery.

However, companies impacted by the chip shortage may be potential bets for long-term investors, as their stock prices are on the lower end today. Another way to play it out is to stay away from stocks and funds that tend to do well when rates are trending higher. Entities like banks, insurance companies, brokerage firms generally benefit from higher rates, therefore, should be avoided.

One ETF to follow is the VanEck Vectors Semiconductor ETF (SMH) which tracks the overall performance of the 25 largest U.S. listed companies that produce semiconductors. Invesco S&P SmallCap 600 Pure Growth ETF (RZG) is also interesting as it includes equities in the S&P SmallCap 600 Index which display strong growth characteristics.