As the Chinese authorities announce that Xi Jinping's 'shared prosperity' campaign measures will soon fade, it is hard to expect Tencent, the Chinese online gaming and social networking giant, to be off the hook.

According to the latest news, Chinese regulators are coming down hard on WeChat, Tencent's online payment platform, as the company records the slowest revenue growth in its history.

Tencent has lost up to USD500 billion in market value

Tencent, one of China's largest online game providers, has already been hit hard by the government crackdown on the industry.

Although the company has skilfully sidestepped cybersecurity and antitrust investigations that have ensnared competitors such as Alibaba, its games have come under attack for causing online addiction and short-sightedness in children.

As a result, Tencent has lost nearly USD500 billion in market value since its 2021 peak, and the stock trades at just 17 times its trailing 12-month earnings, less than half its own five-year average, according to Refinitiv. That's well below its global gaming peers such as Take-Two Interactive and Activision Blizzard. 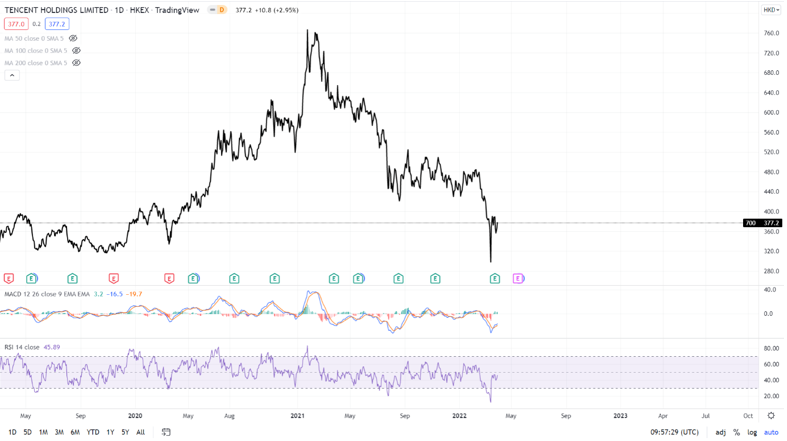 In pursuit of WeChat

It is now reported that the government wants to attack WeChat Pay, Tencent's fintech arm, which could continue the loss after more than a year of bleeding. In fact, Tencent's fintech and commercial arm - which also includes cloud computing - is the fastest-growing area, contributing around 30% of the company's sales. It is its largest source of revenue after online gaming.

No one knows better than Alibaba how bad it is to have the fintech arm of its business attacked by the ruthless Chinese government. Alibaba's Alipay has indeed been a major target of the 'shared prosperity' programme. This cost Alibaba's Ant Group what would have become the largest IPO in history. Fidelity valued the company at USD68 billion last July, up from nearly USD315 billion before the crackdown.

WeChat’s separation could be more painful than AliPay's

What Chinese regulators want is to make WeChat Pay a separate fintech company. Yet the overhaul of Tencent's fintech arm could damage the synergy within WeChat and cause serious problems for the company, as divorcing WeChat would not be as straightforward as AliPay.

Alipay is a separate financial application that allows its users to conduct their financial transactions online. WeChat Pay, on the other hand, is an integral part of the WeChat app, which also involves a social media feed like Facebook, online shops, games, and taxi and bike apps, as well as messaging services. So, removing WeChat Pay from the WeChat universe would defeat the purpose of having a super app that brings together social media and financial apps under one roof.

But on the other hand, Tencent executives say a shake-up of the fintech should have little impact on operations, as WeChat Pay is primarily a transactional platform, not a lender. Either way, they may not have a choice.

The separation of the business and the delineation of the core online game business may help Tencent to mitigate some of the uncertainty caused by the government restructuring and to reduce and diversify the risks of the different divisions.

In fact, the regulatory risks for video games are more predictable than the risks associated with financial technology - where the Chinese government knows no limits. China's central bank has a proven track record of eradicating entire sectors like peer-to-peer lending and crypto-currencies.

Moreover, the crackdown on gaming appears to be coming to an end as the company has already imposed caps on the amount of time and money children can spend playing online games, which Tencent executives say has had a limited impact on the bottom line. But the numbers say otherwise.

Beijing has not approved the launch of a single online game since the end of July, limiting the growth capacity of Tencent's largest revenue engine. This certainly explains why the company announced the slowest revenue growth in its history in the last quarter of 2021. 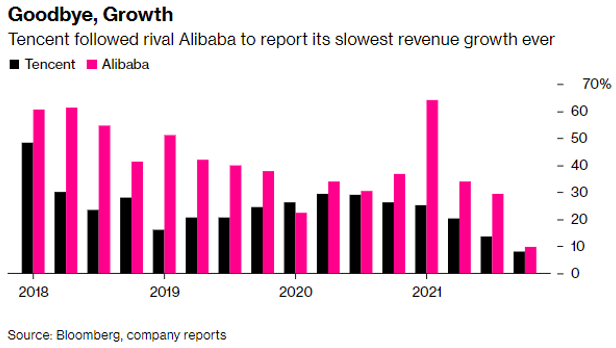 For the full year 2021, Tencent reported revenue of 560.12 billion yuan, up 16% from 2020, while analysts were expecting 566.3 billion yuan. Nevertheless, profit jumped 60%, which made investors smile coyly and fear that the worst is not yet behind us.

Today, Tencent is also facing a potential 'record fine' after financial regulators discovered that its mobile payment network WeChat had breached anti-money laundering rules. According to the latest news, the fine could be 'at least hundreds of millions of yuan', which would be larger than typical financial penalties for non-bank payment companies. Alibaba, for example, had to pay a record USD2.8 billion in April 2021.