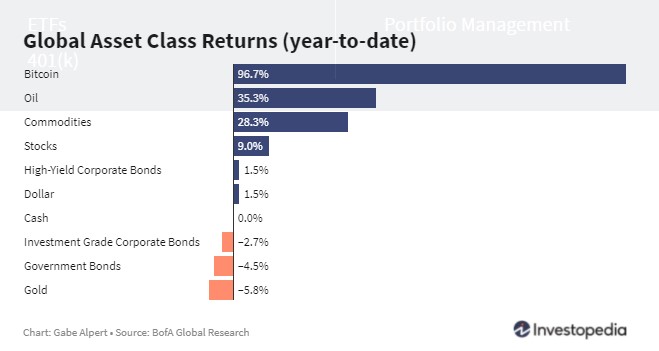 Story #1: Rotation resumes out of tech as stocks end mixed.
The major indexes produced mixed returns across a wide range as a Friday rally erased some losses from early in the week. The Dow fared best, while the technology-heavy Nasdaq Index recorded its worst weekly loss in two months. Technology shares underperformed within the S&P 500 Index, along with consumer discretionary, utilities, and real estate stocks. Value stocks outperformed their growth counterparts for the third week in a row. But not all segments of the market did well. Recently IPOd stocks saw the biggest weekly drop since March 2020 while "Most Shorted" stocks suffered their biggest weekly loss since Oct 2020...
Story #2: US Earnings season ongoing
Earnings season continued to wind down over the week, with 442 of the S&P 500 companies expected to have reported first-quarter results by the end of the week, according to data from Refinitiv. Earnings over the quarter have generally surpassed analysts’ estimates by a wide margin, with analysts polled by FactSet currently expecting overall profits for the S&P 500 to have grown by over 49% relative to the year before. However, we note that earnings beats or misses do not appear to have had dramatic effects on stock price.
Story #3: Jobs numbers calm inflation worries.
Inflation seemed to be a major driver of sentiment during the week. Warren Buffett commented over the previous weekend that the economy was running “red hot,” and Treasury Secretary and former Federal Reserve Chair Janet Yellen acknowledged on Tuesday that rates may have to rise somewhat to prevent the economy from overheating – although she later clarified that her remarks were not intended to be a prediction or a recommendation for the central bank to raise rates. However, on Friday, US nonfarm payrolls expanded by only 266,000 in April, a fraction of the nearly 1 million jobs widely expected. The unemployment rate rose a bit, from 6.0% to 6.1%, and March job gains were also revised lower.
Story #4: 10-year Treasury yield briefly touches two-month low.
The disappointing jobs data sparked a sharp but temporary decrease in Treasury yields on Friday morning, helping temporarily push the yield on the benchmark 10-year note to a two-month low before finishing lower for the week. Dovish remarks from several Federal Reserve officials also contributed to the decline. In Europe, Core eurozone bond yields fell at the start of the week on underwhelming U.S. manufacturing data. Yields steadied after a European Central Bank policymaker hinted that the institution’s bond purchases could slow in June. The yields on peripheral eurozone government bonds largely rose as Italian government bonds then sold off after reports emerged that the country would issue debt with a 30-year maturity. Uncertainty over the timing of Italy’s recovery package also pushed peripheral yields higher.
Story #5: Shares in Europe climbed on stronger-than-expected earnings results and growing confidence in an economic recovery.
The pan-European STOXX Europe 600 Index ended the week 1.72% higher. The Netherlands and Belgium began easing coronavirus lockdowns, allowing outdoor hospitality to recommence. Most European countries have given at least a quarter of their populations a single dose of vaccine. The European Commission also announced plans to reopen the European Union’s borders again to holidaymakers from outside the bloc by June. Economic data continued to point to a broad-based pickup in eurozone activity in March. The volume of eurozone retail sales climbed 2.7% sequentially, beating a consensus forecast, after rising 4.2% in February.
Story #6: Chinese stocks fell in a holiday-shortened week.
The large-cap CSI 300 Index fell 2.5% from the previous Friday, while the Shanghai Stock Exchange Composite Index shed 0.8%. Mainland markets reopened Thursday after being closed Monday through Wednesday for the Labor Day holiday. Consumer stocks were among the best performers as preliminary holiday sales and travel data were positively received by investors, though a 40% surge in tourism in Macau was seen as disappointing. On the economic front, the Caixin services Purchasing Managers’ Index rose to 56.3 in April, the fastest growth pace this year for the private survey. Domestic tourism surged over the five-day Labor Day holiday and surpassed pre-pandemic levels, according to the government, though revenue over the period fell short of forecasts.
Story #7: Weak dollar
The dollar plunged today on the dismal jobs data, to its weakest since February. This was the 4th down week of the last 5 for the dollar and the biggest weekly drop since early November...
Story #8: Strong commodities markets
The CRB Commodity Index has now doubled since the lows last April, at its highest level in 3 years. Commodities are now up for 5th straight week. Massive amounts of stimulus aimed at the real economy, higher inflation which is perhaps not completely transitory, a green revolution that is commodity-intensive (many people tend to forget this), and supply chain issues popping up everywhere bode well for commodity prices.
Story #9: Precious metals rallied, copper surged above $10k
Gold rallied to its best week since Nov 2020, ending at $1840, its highest in 3 months. Silver pushed back above $27.50, having found support at $25. Copper rallied to $10,232 a ton, bringing its price up >30% year-to-date.
Story #10: Booming cryptos
Ethereum surged to a new record high, dramatically outperforming bitcoin over the same period while Dogecoin surged ahead of the SNL weekend show hosted by Elon Musk.