What now for crypto after the Luna / Terra crash?

The meltdown in Luna and its TerraUSD stablecoin brought chaos to crypto markets. This raises the question of whether stablecoins are understood and potentially offer a rare buying opportunity for ‘quality’ crypto assets.

Stablecoins remain opaque for many and often attract retail investors by offering high yields. They aim to hold their value ‘pegged’ to the price of another asset, most commonly to the US dollar, for stability. Investors then lend their stablecoins through a process called ‘staking’ to generate a generous yield.

However, not all stablecoins function the same, as the under-collateralized Terra has demonstrated as its system ‘broke’ in a catastrophic fashion, sending its sister crypto Luna plummeting with it.

What happened to Luna?

Generally, a stablecoin is backed by USD reserves, to bring confidence and in case investors redeem. Luna’s algorithmic stablecoin TerraUSD (UST) had the flaw that it was well under-collateralized and that it invested most of its reserves in Bitcoin, making it vulnerable to a rapid drop in crypto prices.

It is rumored that some ‘whale’ traders placed large bets against Luna, TerraUSD, and Bitcoin, which accelerated the downfall of Luna/TerraUSD as investors exited UST at lightspeed as it became apparent that the under-collateralized reserves would quickly run out. 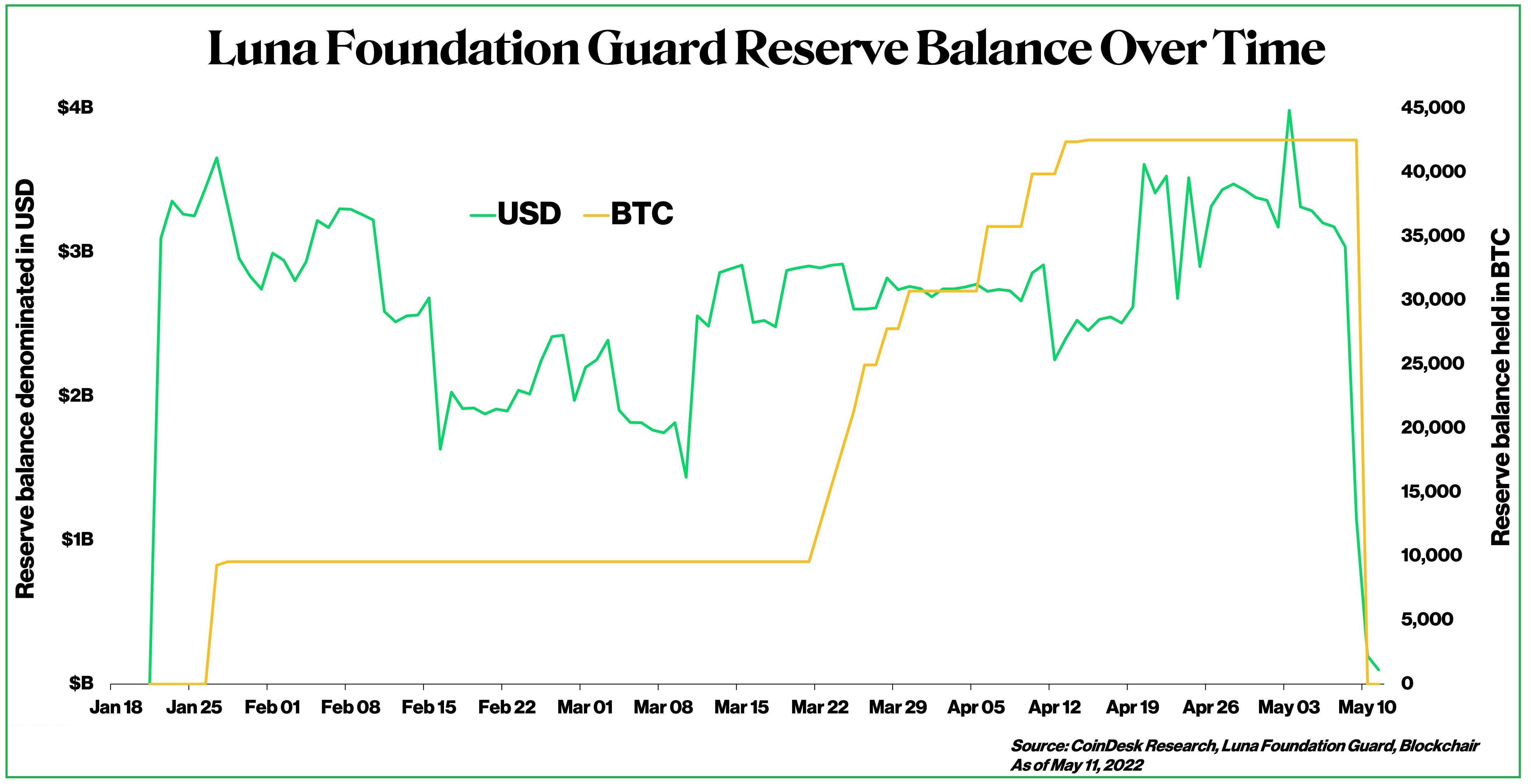 The process of both depositors rapidly exiting, crypto prices crashing, and attackers betting against Luna and UST is believed to have accelerated the fall of Luna. Investors must remember, however, that the attack was made possible because of the vulnerabilities in the Terra experiment, which was not built to withstand large redemptions and/or a crash in crypto assets.

Investors lost around USD40 billion as Luna was once priced at USD116 and fell to 0. Its stablecoin TerraUSD fell to less than USD 0.1 and only the investors investing the smallest amounts can expect to get some of their investment back. 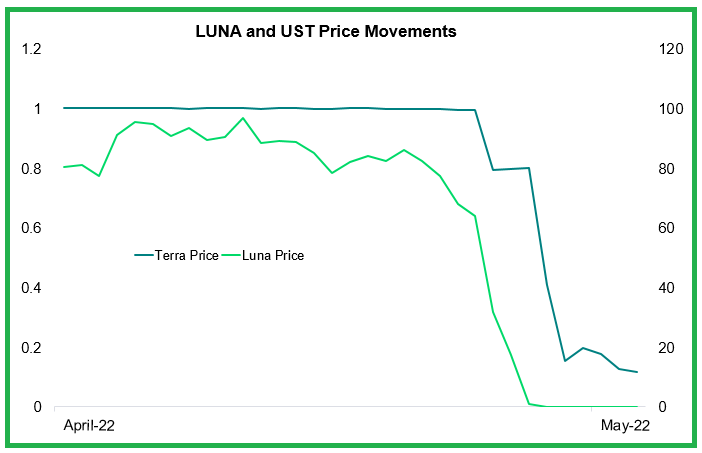 What about other stablecoins?

Stablecoins are designed to serve as ‘stable’ store of values in the crypto world and are meant to be fully backed by enough money held in reserves to ensure depositors can receive their dollars during withdrawals. In TerraUSD’s case, the algorithmic stablecoin only held a small fraction in reserves and a significant portion was held in Bitcoin.

Tether (USDT), the largest and most popular stablecoin briefly fell to an all-time low of USD0.95 during the crypto crash, before quickly regaining its USD1 peg as it promised to allow savers to withdraw at the USD1 peg. It took to Twitter to reassure holders and in an arbitrage fashion, some traders were able to temporarily buy the stablecoin below 1 and redeem it at the USD1 peg value. Nonetheless, its market cap dropped to USD75 billion, after investors redeemed more than USD7 billion in a week.

Investors have confidence in Tether because its assets are backed by cash-like instruments consisting of US government debt (USD35 billion) and corporate bonds (USD25 billion), although the company behind the stablecoin has refused to share details from it calls its “secret sauce”. With lawmakers in several countries calling for stablecoins to be regulated, investors must also weigh the regulation risks that could put a dent into the performance of stablecoin earning strategies.

A buying opportunity for other cryptos?

The crash in Luna is believed to have accelerated the drop in other cryptos as the team behind Luna sold its Bitcoin reserves in an attempt to restore the dollar peg, and as some traders were forced to sell their other crypto holdings to satisfy margin calls due to the drop in Luna. The domino effect led to more panic selling.

At the current price of around USD30’000 Bitcoin is retesting its lows of July 2011, which has provided technical support since January 2021. 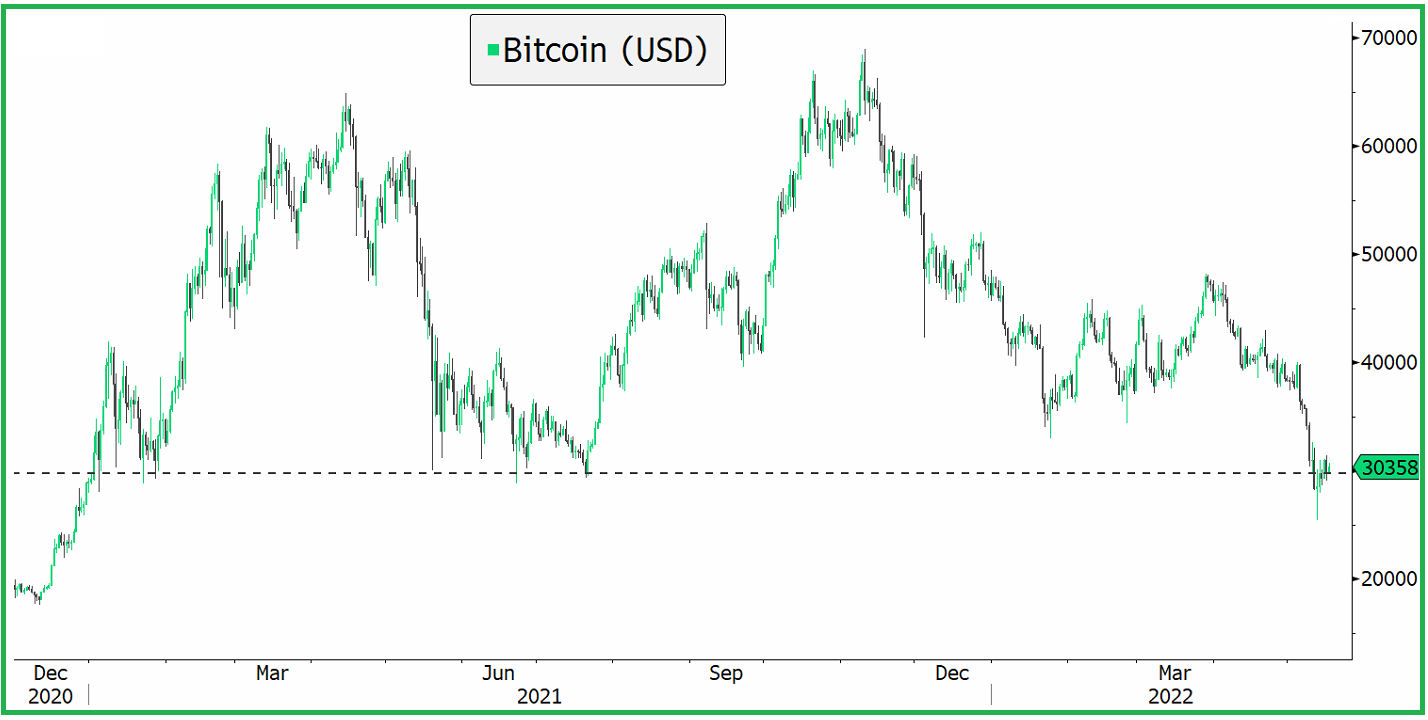 However, it is difficult to ‘gauge’ whether crypto assets have made a definite bottom, as their correlation with other risk assets has been high this year, as the market faces extremely difficult conditions due to the removal of liquidity. Quality crypto assets that have already survived through several crypto declines such as Bitcoin and Ethereum have fared better in the downturn.

Meme coins such as Dogecoin are likely to face the key question of whether they bring any utility or if they have any real use case, and thus could face more volatility.

For investors with a higher risk appetite, crypto assets that have suffered deep drawdowns but remain in the top 10 by market cap, such as Solana and Cardano could be considered.

While the Luna situation is unique, it does bring the question of how vulnerable some of the cryptocurrencies’ ecosystems are and whether they are built to withstand market volatility. In addition to demonstrating the vulnerabilities of stablecoins that are not fully collateralized, the Luna/TerraUSD situation damaged market confidence and brought down a crypto slump, with many crypto assets trading at depressed levels compared to their November 2021 highs. For investors with a high-risk appetite and holding power, the current crisis may provide attractive buying opportunities. For more risk-averse investors, a clearer signal that the worst is over may be warranted before considering entering.