Why Coursera’s public debut is riling up markets

Coursera is a massive open online course (‘’MOOC’’) provider hosting more than 150 universities and 4,000 courses. The firm saw great growth during the pandemic and its public debut has got investors excited.

Whether you have experienced it yourself, or have seen it around you, the education system of some countries is downright pathetic. Researchers associated with the World Economic Forum have indicated that the access to kindergarten classes at an early age is one of the major indicators of a person’s life expectancy and economic outcome. In other words, less access to education at a young age equates to shorter lifetimes.

Enters Coursera. According to Dr. Amjad from the University of Jordan, online teaching enables him to teach more efficiently via chat groups, document sharing, task and performance analytics and even voting. There is a paradigm shift underway in education he says, which has largely been triggered by the pandemic, and some say it could ultimately be for the better.

While there are many pros for the integration of IT in our education system there are also problems associated with inequality to access. Those students with less resources tend to have less access to online courses. 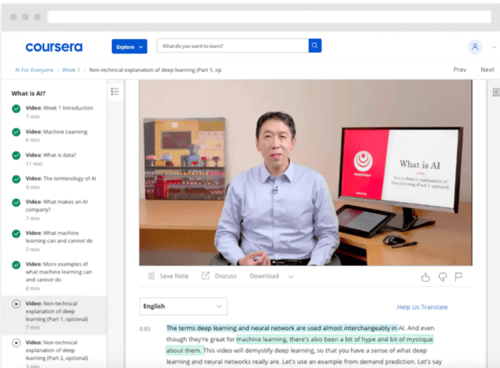 Coursera seeks to address all these stakes with its technology. The company was founded by two professors from Stanford whose vision is to democratize education without losing sight of quality. While there actually is a lot of progress in the number of people gaining access to education compared to 50 years ago, the cost of tuition, driven by an increased demand for schooling, has become a large barrier for many Americans, and students from more impoverished regions of the world. Coursera thinks this is solvable via massive online course work and a range of price points.

Today, Coursera has 77 million learners (up 30.6 million during covid), hosts over 2,000 organizations, 4,000 institutions, and 300 government entities. These are impressive figures considering the company was founded in 2011.

Coursera wants to be the go-to player for re-skilling the labor force, which it says is a huge moat going into an era of automation, where even you dear reader may need to re-skill yourself one day. However, its main focus is academic education which Coursera became ubiquitous with during the pandemic. According to the United Nations, 1.6 billion students in 190 countries, or about 94% of all students in the world, say their school closed at some point due to the virus.

The pandemic may very well have changed education forever, and this company wants to lead to the way. The graph below shows the impact covid has had on global education with the number of online learners breaking previous levels, much to Coursera’s gain. 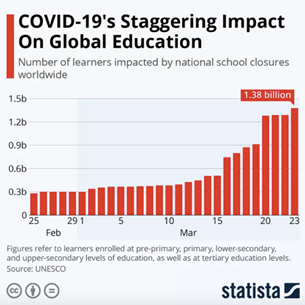 Coursera made its public debut yesterday March 31st, 2021 on the NYSE through an IPO trading under the ticker ‘’COUR’’. The company began trading at $39 a share but ended the day at $45 a piece, a 36% pop giving the education tech provider a market cap equal to $5.9 billion. Its offering enabled the firm to raise nearly $520 million at an implied valuation of $4.3 billion, a rise from its private market valuation of $3.6 billion.

The company makes money by selling online courses, professional certificates, guided projects, and full-on degrees. It provides businesses, governments, and campuses a platform upon which to train its labor force and scale quickly. Prices begin as low as $9.99, and memberships can cost up to $99 month. Consumer membership subscriptions are Coursera’s main revenue driver.

While the company is not yet profitable, in part due to its young age and aggressive growth tactics, it has shown very steady growth figures in revenues, and has kept net losses relatively under control. The company has put a lot of efforts in the past year in terms of marketing campaigns which is made clearer through the numbers; sales and marketing expenses as a proportion to revenue grew from 31% in 2019 to 37% in 2020. The difference of 6% was however conducive to a 59% growth in revenue between 2019 and 2020 which could indicate a scaling network effect of the platform. 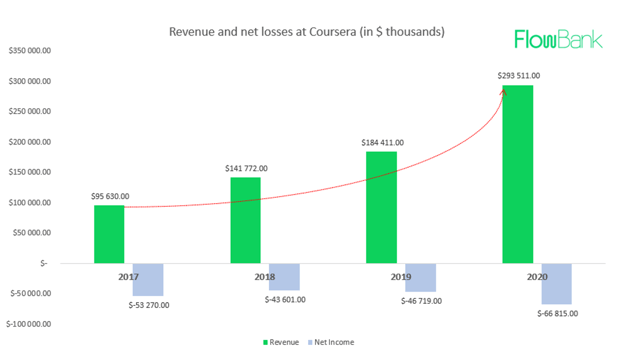 This business employs a subscription-based model making revenues more predictable as users pay in advance for courses yet to take. One of its challenges going forward however will be to continue converting free learners to paying learners, so we should expect efforts made on this front in either marketing, or pricing strategies as the company scales more in 2021.

Lastly, it is nice to see a business broken down by segment revenue which the graph displays below. The pandemic came as a huge boost for many companies and MOOCs were direct beneficiaries. While the general trend was already upwards prior to the pandemic, 2020 showed stellar performance with the general consumer segment growing 59%, enterprise 47% and degrees 97%.

The global education market is large, and it is growing at a fast pace. As technology becomes more accessible and schools begin to introduce more IT options, Coursera could find itself in the middle of a large northbound wave. According to the education market intelligence firm HolonIQ, the worldwide higher education market was about $2.2 trillion in 2019. The global online degree market was close to $36 billion with an estimated growth predicted to double to $74 billion by 2025.

Considering this type of profit opportunity, the main risk Coursera can see right now is simple: competition. As Coursera made its way to public markets, it took on the risk as a first-time online education provider, and showed it was possible to successfully raise cash, meaning peers will want to dive in next.

Top alternatives to Coursera are Khan Academy, Udemy, Udacity, 2U, Eruditus, Codeacademy, and a flurry of other specialized and broad offerings. While the goal of these technologies is to disrupt the way education is taught, most have opted for partnership schemes with universities, splitting revenues with them rather than competing head-to-head.

A pertinent question we often get is, how are covid-19 beneficiaires going to fair after the pandemic stabilizes? How is Coursera going to grow when kids go back to school?

The firm said in its S-1 filling that it would focus on the free learners and lure them in as much as possible. Perhaps doing so through gamification of the interface or by offering more resources like networking. With new money raised, the company will be able to invest further in growth through marketing and pricing tactics and by growing their partnership deals with larger institutions and popular brands. Maybe one day we will see Nike and Coursera collaborate, who knows! Furthermore, international expansion, while it comes with risk, is the future for companies like Facebook, and could be the case for Coursera.

Whether we are young, old, or in between we have all been pushed to accept our increasingly digitalized world. We work on magazine sized laptops, make contactless payments for our food with chocolate bar shaped phones, so why not move education to inside our homes?