Wild election in Forex! What’s next for the Dollar?

Currencies have been all over the shot on polling day and in the hours afterwards. Financial markets and betting odds have fluctuated wildly.

In the case of betting odds, there was a full 360 degree move with 2:1 odds on Trump flipping to 2:1 on Biden and then back again. 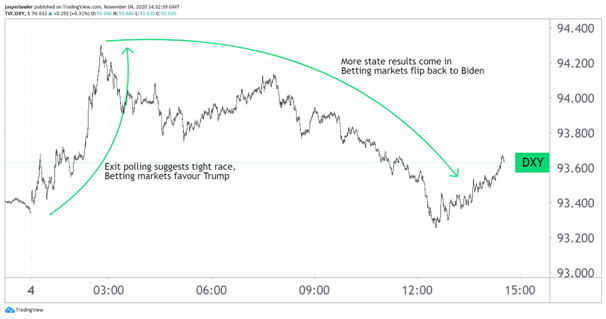 Early expectations of a blue wave where Democrats would take the presidency and both chambers of congress quickly faded after exit polling and when it became clear the Senate would remain Republican. Gains in the dollar extended when President Trump said he would take the election result to the Supreme Court.

Things turned around again on Wednesday morning – sending the US dollar back lower on the day - when Biden flipped the state of Arizona and looked competitive in the battleground states of Wisconsin, Georgia and Michigan. Trump’s early lead in Pennsylvania has faded as more mail-in votes, which tend to be Democrat-leaning came in.

As the dollar reacted as haven – other global currencies reacted to rising and falling chances of trade conflict with the United States. The Chinese yuan and Mexican Peso have proven two of the most sensitive to a Trump victory after his first term was characterised by the renegotiation of NAFTA and sanctions on Chinese imports. Moves in peso seem more like a legacy affect from 2016 since the new USMCA trade agreement has now been signed between the US, Mexico and Canada. For China the impact of the next presidency is very real.

The (inverted) chart below shows the Mexican Peso (USD/MXN) tanking 4% before regaining almost all the losses. The offshore yuan dropped over 1% before recovering. 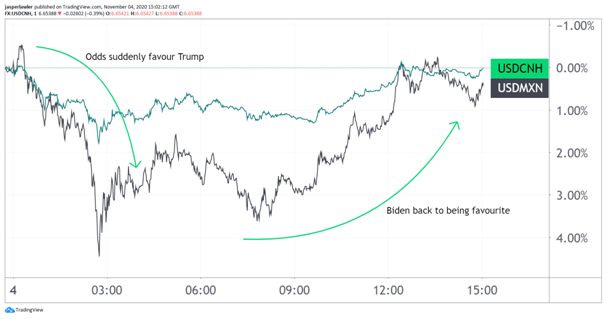 Currencies have swung back from the sharp initial moves but look unable to build on them. Given that a ‘Democratic sweep’ is no longer likely, it reduces the chance of a quick and large coronavirus stimulus program.

At this stage, Biden is back to being the favourite but the dollar is still the ‘only hedge in town’ to a broad risk-off mood in markets. US Treasuries have often sold off in concert with equities and are not an attractive long term asset to hold onto because of the lack of yield relative to cash.

Moves in the US dollar as a haven have been corroborated in other markets where there was a spike in volatility, a drop in stocks and bid in bond yields- which then all reversed as the day went on.

As it stands on Wednesday afternoon, there is no declared winner and markets appear to be hoping for the best- that it needn’t go to the Supreme court or take days to resolve.

Next impetus for the US dollar

It’s important to separate out short-term haven flows in reaction to uncertainty and the longer term implications of who becomes President for the US currency.

Trades in forex are always relative, and despite suggestion that Biden would be a dollar-negative president – the euro fell for six days in a row in the lead up, falling a 1-month low by Election Day. National lockdowns across Europe and the crippling affect they have on the economy have seen the euro turn lower in October.

If the US response to the virus diverges from Europe – namely less lockdown and other means to mitigate the spread – then the US dollar could benefit through higher relative growth expectations.

The point about stimulus expectations related specifically to a Blue Wave. Now with the increased chance of a divided government, the effect of extra deficit spending on the US dollar is more moderate. In fact, if the Senate remains Republican, it might even be better to have Donald Trump as President to agree a large sum for the stimulus bill. Republicans might be less inclined to support the demands of Nancy Pelosi’s House of Representative and a President Joe Biden.

If after the election is over, markets get the sense that new fiscal stimulus package is a long way off, attention will switch back to what support the Federal Reserve can offer the economy. This is by no means a wild conjecture – it is exactly what is happening in Europe. No sooner have national governments announced new lockdowns, in the absence of a functioning Eurozone Recovery Fund – the ECB has suggested it will increase quantitative easing. The scope for more QE from the Fed in December likely increases – that increases the dollar money supply, devaluing the dollar – and it also increases risk sentiment in markets, so the dollar loses ground as a haven.

The Fed will be reluctant to introduce new stimulus so it might require a shift in the tone of markets to a more negative one first to get their attention. That would mean short term dollar strength and equity weakness.