Will the gold mines shine again?

Gold stocks have suffered in recent months, and this despite an environment that seems to remain favorable for the sector.

Mining stocks included in the VanEck Vectors Gold Miners ETF (GDX) were among the best-performing sectors in 2020 with a return of 32%. But year-to-date, the segment is suffering from the price decline in gold. With the NYSE Arca Gold Miners Index down 6%, the sector is clearly underperforming the major equity indices in 2021. Yet, macroeconomic factors and industry fundamentals still look fine. The same is true for some technical indicators. Is it time to revisit gold mining? Here are some answers.

At the beginning of the year, we witnessed the swing of the US Senate to the Democratic Party after their victory in the run-off election in the state of Georgia. Since then, Joe Biden's party has been in control of the White House, House of Representatives and Senate, facilitating the implementation of massive budgetary support. The Biden administration is now counting on a two-step fiscal stimulus: a $1.9 trillion bailout of the economy and a recovery plan that could reach $3 trillion.

This fiscal generosity obviously has its corollaries. First of all, the twin deficits (budget and balance of payments) have increased; as shown in the chart below, a deterioration of these deficits is often accompanied by a weakening of the dollar. 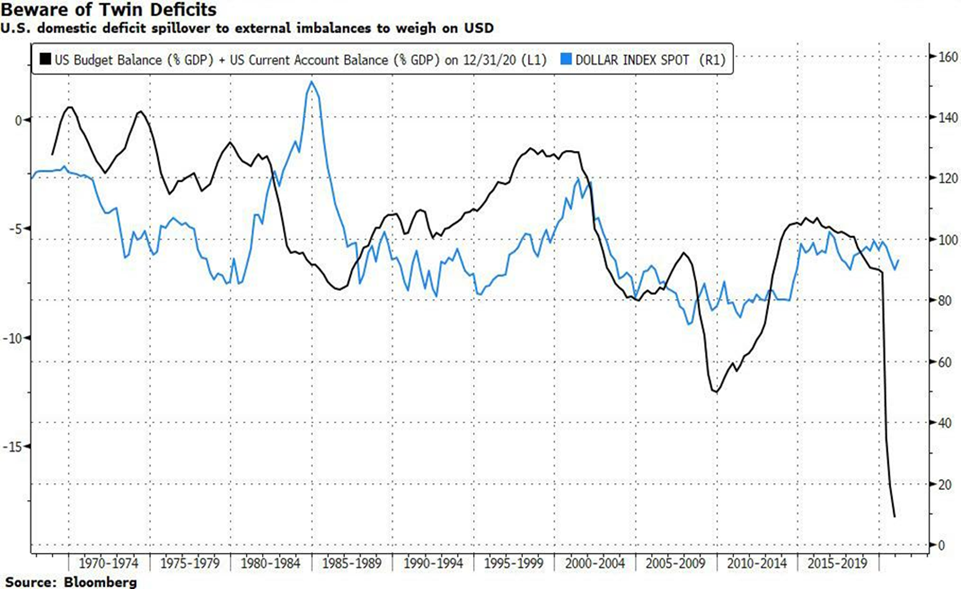 On the other hand, the financing of this fiscal plan implies huge debt issues that can probably only be absorbed by an increase of the famous "quantitative easing" (QE). Indeed, without a substantial expansion of the Federal Reserve's balance sheet, such debt issuance would result in a sharp rise in bond yields - a development that the US government may not want to see at a time when the economy is in full recovery. March illustrated the limits of the system - the US Treasury issued no less than $372 billion in bonds and treasury bills. The Federal Reserve was able to subscribe to "only" 23% of these issues. As a result, the long end of the US yield curve is under pressure.

For some economists, the Federal Reserve will have to quickly increase the level of QE from $80 billion per month to $200 or even $300 billion. 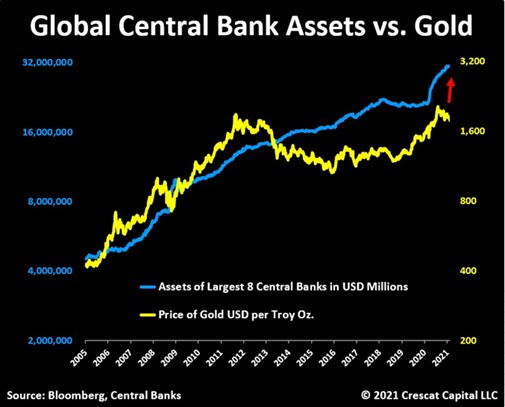 In the past, we have seen that the use of "money printing" usually pushes investors to invest in real assets - including gold. As the chart shows, the price of gold appears to be strongly correlated with the expansion of the aggregate balance sheet of central banks.

These massive injections of liquidity are raising fears of a return of inflation that is expected to be higher than the nominal interest rate. In other words, real rates should fall, which is generally favorable for gold.

In the end, the current macroeconomic environment should involve a weakening dollar, further expansion of the size of central bank balance sheets, and lower real interest rates. This combination would be favorable for the yellow metal and therefore for gold stocks. Indeed, there is a high correlation between gold and mining stocks - although this correlation is not stable over time.

At the fundamental level, three elements concerning gold mines are of interest.

The first is capital spending. Indeed, gold mine executives collectively seem to have learned the hard lessons of previous cycles. In the past, gold companies tended to invest in new capacity when gold was at its peak. But when gold entered a bear market, the mines were faced with a debt overhang as the revenues generated fell sharply. In the current cycle, management seems to have been much more cautious. There is even a very clear dichotomy between gold prices and capital expenditures (CAPEX). This is a unique scenario and should allow gold to continue its upward movement as the market finds itself in a situation of imbalance between demand (up) and supply (down).

However, a continued rise in the price of gold will most certainly encourage gold companies to increase their production capacity again, which will enable them to increase revenues.

Another positive for gold stocks is their debt position. While the precious metals mining sector has historically been one of the most highly leveraged, their debt-to-asset ratio is now one of the lowest of any industry. This is obviously related to the point mentioned earlier (low capital expenditure). This is reassuring in terms of balance sheet quality and cash flow generation. As the chart shows, aggregate free cash flows for the mining sector (gold and silver) are expected to rise sharply in 2021, which could ultimately lead to an appreciation of the mining stock price.

These very favorable fundamentals give gold companies the freedom to finance their future growth and profitability through increased debt.

The last important factor for the sector is a favourable "scissor" effect on the income statement. As mentioned above, the rise in the price of gold has a direct positive effect on the revenues of gold stocks. But this increase in the top line comes at a time when operating expenses are falling. These are mining costs (correlated with energy prices) and payroll costs in emerging countries (due to the weakening of many local currencies). Although these costs could rebound in the near future (this is already the case for oil prices), the current environment should allow operating margins to develop favorably in the coming months.

Historically, gold stocks have been used to play the rise of gold with leverage. This is exactly what happened between March and August 2020. Leverage is also playing its part on the downside; indeed, miners have underperformed gold since the yellow metal began its downtrend late last summer. 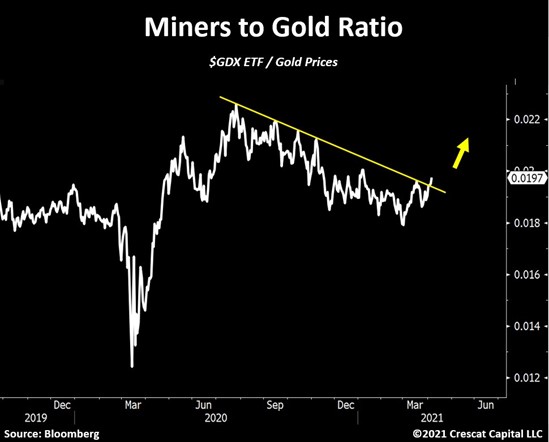 But the relative trend is about to reverse. As the chart above shows, the relative price of the Van Eck Gold Miners ETF (GDX) to gold is breaking the bearish resistance line that has been in place since August 2020. This technical setup appears to be favorable for the sector.

How to invest in gold mining