Will volatile forex pairs in 2020 be best currencies to trade in 2021?

Given the massive forex volatility of 2020, for the New Year, it pays toreview the performance of the most volatile forex pairs to visualise the price trends and the possibility of reversals.

The top risers and fallers in FX 2020

Some currencies are deservedly weak but there will be some that are undervalued. On the flipside some currencies have performed very strongly and maybe at least due a pullback.

The following table shows the best and worst performing exchange rates of 2020. The point of discussion is whether some of these more extreme positions will revert towards the mean in 2021 now that the worst of the pandemic is (hopefully) behind us and vaccinations have begun. 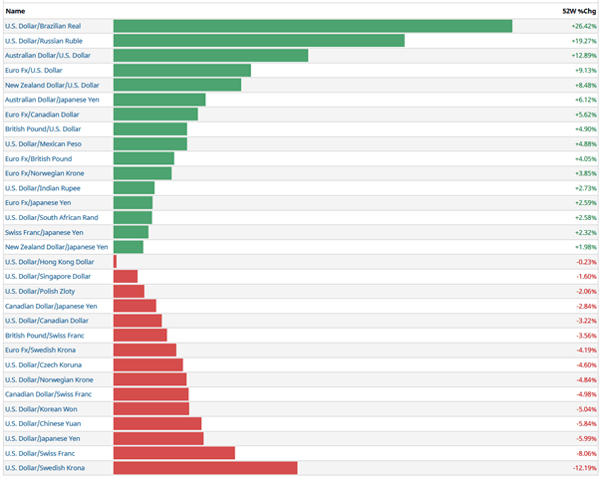 We can quickly see that the top fallers include the US dollar as well as the Brazilian real and Russian rouble, while the top gainers include the Aussie dollar, Swedish krona and the Swiss franc.

Let’s examine these specific cross pairs on in a 1-year price chart.

Here we can see that almost all currencies with the exception of the US dollar fell out of favour in March. It is the performance post-March that determined whether these currency pairs finished the year well or badly. Let’s go through the fundamentals of each one to see

The real is currently valued around 5.30 to the US dollar- approximately the middle of last year’s trading range. USDBRL is still nearly 30% above where it started 20, a colossal move by currency market standards, although less so for EM currencies. Looking forward the focus is on the government of President Jair Bolsonaro’s government rollout of vaccines to combat the covid pandemic. Brazil is second only to the US in covid-deaths and is so far behind the pack in vaccinating the public. Outside of covid, the price of Brazil’s biggest export commodities continue to rise and the resumption of international trade after last year’s recession helps too.

The Russian ruble fell another 20% from already historically low levels against the US dollar, which made it the world’s most undervalued currency according to the Big Mac Index compiled by The Economist. A move out of riskier currencies in during the coronavirus pandemic, a crash in oil prices, and geopolitical risks associated with sanctions and the fallout from the Novichok poisoning of Alexei Navalny. The ruble has strengthened through the end of 2020 alongside a strong pickup in the price of oil. The ‘relation trade’ that supports the price of oil should also support the ruble. The biggest game-changer would be if the US takes a softer approach to Russia under new President Biden.

Having started the year in a very weak position because of out-of-control forest fires in Australia and as a proxy for the trade war between the US and China, the Aussie was in a good position to rebound. The Aussie lost more ground in March but bottomed and rallied 12% over the last 52-weeks. A government spending-led growth recovery in China brought on by heavy spending on infrastructure bolstered demand for Australia’s commodities. Despite frayed relations with China over the source of the pandemic, Australian export volumes and the price of those exports have been rising. The biggest risk factor for the Aussie is a downturn in the China credit cycle that reduces commodity demand.

Switzerland’s historic neutrality spurred big demand for the safety of Swiss franc in 2020. The demand was such that the Swiss National Bank has been intervening all year and continues to sell francs in the market. The Swiss central bank will be hoping to stave off the franc weakness until the currency is less in vogue as economic conditions improve. If the global economy picks up pace thanks in part to European and US stimulus efforts, there should be less need for the franc as a haven. However, should the effects of pandemic prove too much and economic growth softens again, the franc may test the metal of central bankers.

While Sweden was centre of attention for its maverick approach to tackling the pandemic – avoiding the damaging lockdowns seen in other European countries, it was probably the actions of its central bank that made the most difference. The Swedbank kept policy loose at 0% but did not cut into NIRP and bought government bonds at a much more modest pace relative to other major regions like the US, Europe and Japan. That said, although Sweden’s economy dropped like everywhere else because of its strong reliance on exports, the long-term economic scarring might be much less by avoiding full lockdowns that forcibly stopped many people from working with potential long term implications for the labout market.

Conclusion about most volatile forex pairs in 2021

There is a clear distinction to be made between the currencies of the countries that handled the pandemic the best and those that suffered the most. Thus the trajectory of the pandemic – and secondarily via its impact on oil prices and haven demand that will determine whether these volatile forex pairs continue the current trends or reverse in 2021.