The EV bus and truck company is looking to go public via SPAC in the beginning of next year.

Lion Electric Company is a Canadian electric vehicle company based in Quebec. It was founded in 2008 with one goal in mind: to revolutionize the school bus industry. Since then, they expanded their services to commercial truck (class 5 to 8) and transit and shuttle buses. They have also created an entire education project to educate school districts and fleet operators on the possibilities offered by the electric technology.

Today, they have over 350 employees, 300 vehicles on the road, the capability to add 2'500 new vehicles per year as well as 6 million miles of cumulated road experience.

As of today, Lion is the only V2G solution provider that has been tested. V2G is short for "Vehicle to Grid", which is a bi-directional charging system, where vehicles either give or take energy to charging station, to get a maximum optimization and stabilize supply in times of high demand. The EV becomes a mobile generator, all connected between each other on the grid.

The main value proposal of the company is to save up to 80% in energy costs as well as up to 60% in maintenance costs. As an illustration, one all-electric truck eliminates up to 100 tons of greenhouse gas per year, which is the equivalent of taking 20 cars off the road.

The company announced on Monday that they would go public, being acquired by a special purpose acquisition company (SPAC) called Northern Genesis.

The company will be listed on the New York Stock Exchange with a valuation of $1.9 billion. They aim to raise $200 million in private investment in public equity (PIPE) and $320 million in cash proceeds, or a little over $500 million overall.

The deal is not the only one going for the SPAC way, as Arrival, Canoo, Fisker, Lordstown Motors and Nikola Corp. and even Hyliion, all announced a SPAC in 2020.

The proposed transaction should take place in the first quarter of 2021, and the company will be listed on the New York Stock Exchange under the ticker symbol "LEV".

“This transaction marks an important milestone in Lion’s continued emergence as a market leader in the design, manufacturing and distribution of purpose-built, all-electric medium- and heavy-duty urban vehicles,” Lion founder and CEO Marc Bedard said in a statement. 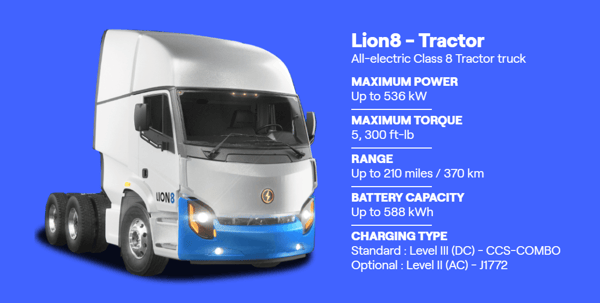 Further steps for the company

The cash will be used to fund the company's growth, by building a US-based factory as well as make advancement in their battery system. They are now looking at around 10 sites, with the goal to start production in 2023 and to release their first battery powered Lion6 and Lion8 trucks.

As for today, Lion is already producing all-electric medium and heavy-duty urban trucks and buses. The company already produced 300 vehicles and is planning to deliver 650 more in 2021.

What is more, they even landed a contract with Amazon, and supply them with 10 electric trucks for middle mile operations. A first contract that could be the starting point of further developments and partnerships.

President Joe Biden has a plan to make all their iconic yellow buses emission free by 2030. On average, this is 480’000 yellow buses carrying 25 million children to school every day. Unfortunately, as of today, less than 1% of these buses run on electricity. The fight will be much easier for school buses than other vehicles, as clean air for children is quite an unbeatable argument.

Lion Electric would have a first mover advantage on the contract. However, they will most likely lose market share faced with larger and better-funded incumbents.

How the US plans to turn all its iconic school buses electric, in Electric and Hybrid