What is a SPAC? The secret of these "blank check companies"

Special purpose acquisition company, synonym of “mountain of cash waiting for a merger”, has become an increasingly popular way for companies to go public. But how do they work, why do we use them, and what are their inherent risks?

Definition of a SPAC

A special purpose acquisition company (SPAC), sometimes called blank-check company, is a shell company that has no operations but plans to go public with the intention of acquiring or merging with a company with the proceeds of the SPAC's initial public offering (IPO). According to the SEC, "A SPAC is created specifically to pool funds in order to finance a merger or acquisition opportunity within a set timeframe. The opportunity usually has yet to be identified."

In a nutshell, SPACs have a simple model: raise funds from the public markets, then find a company to merge with. When they announce the merger, shareholders can either accept stock in the new company or redeem their shares at the original price of the offering. So, to the SPAC issuer and the company they merge with, the SPAC is a deconstructed IPO with a very short roadshow (in theory, you just negotiate with one investor — or with a few SPACs as you try to attract the highest bidder). To the SPAC investor, it’s the equivalent of a money market fund with an option attached.

The success of SPACs in building equity value for their shareholders has drawn interest from eminent investors such as Bill Ackman who has backed three SPACs till date including the SPAC that took Burger King public.

Some of 2019's biggest SPAC IPOs include Virgin Galactic, DraftKings, and Nikola, all of which have seen their shares skyrocket in 2020. Bill Ackman added more fuel to the SPAC fire in late July when his own acquisition company — Pershing Square Tontine — raised a record $4 billion in its trading debut.


The advantages and limitations of SPACs

Compared to a traditional IPO, a SPAC is seen as much less risky for the private company wiling to go public: you sign a deal with one person (the SPAC sponsor) for a fixed amount of money (what’s in the SPAC pool) at a negotiated price, and then you sign and announce the deal and it probably gets done.

With an IPO, the issuer needs to announce the deal before negotiating the size or price, and there is no guarantee that anyone will go for it until after it has been announced and it starts to be marketed.

But while the SPAC structure is less risky than an IPO for the company willing to go public, it riskier for the SPAC (than it would be to buy shares in a regular IPO). Consequently, the SPAC should be compensated by getting an even bigger discount than regular IPO investors.

In most cases, the SPAC sponsor would retain 20% of the equity in an IPO for 3% to 4% of the IPO proceeds. For example, a sponsor might pay $7 million for $60 million in stock sold through a $250 million IPO.

Given this rather high price to pay for issuing companies, the SPAC structure is probably more attractive to industry executives who aren’t looking to create a permanent vehicle for growth but rather to make lightning-quick acquisitions already run by capable management.

One assumption for this year boom in the accelerating number of SPACs is because of Covid-19, traditional IPO roadshows are hard to do and don’t work as well remotely. As such, there is a shift toward one-on-one deals rather than one-to-many capital raises.

But many industry observers believe that while Covid-19 partly explains some of the deals which took place in 2020, the increased popularity of SPACs is just a continuation of a decade-long trend.

One of the most compelling explanation for the SPAC boom is not that the IPO process is costly (it’s expensive but actually cheaper than a SPAC), but that it takes a long time.

And this longer time to market is especially challenging for companies that want to ride a hype wave. In the ’90s, the IPO process was a rather quick and smooth one. The dot-com bubble had incredible turnaround: Pets.com launched in November of 1998 and went public in February 2000. Hotjobs was founded in February 1997 and didn’t manage to produce a prospectus until June 1999.

Fast forward to 2020 and the IPO standards are much higher while the process is much longer. The market is not structured to quickly turn well-hyped businesses into public companies.

On the other hand, the standards for SPACs are lower, so any time there’s a well-hyped trend or the possibility of one, a SPAC is the right vehicle for companies that suddenly have an opportunity to go public and really want to take it. This was the case for instance with a company such as Nikola, which operates in a capital-intensive industry and want to take advantage of the hype for electric-vehicles. They were able to raise capital quickly.

SPACs made a real comeback in recent years. They had already set a record in 2019, with $13.6 billion raised in total, or four times the $3.2 billion raised in 2016. However, these numbers seem rather small compared to the 248 companies that went public via SPAC in 2020, raising the astonishing amount of $83 billion, which is almost as much as IPOs for the year. And the SPAC boom does not seem to come to an end, as many more companies are lined up to go public via SPAC in 2021, amongst which Butterfly Network, 23andME and Vice Media. 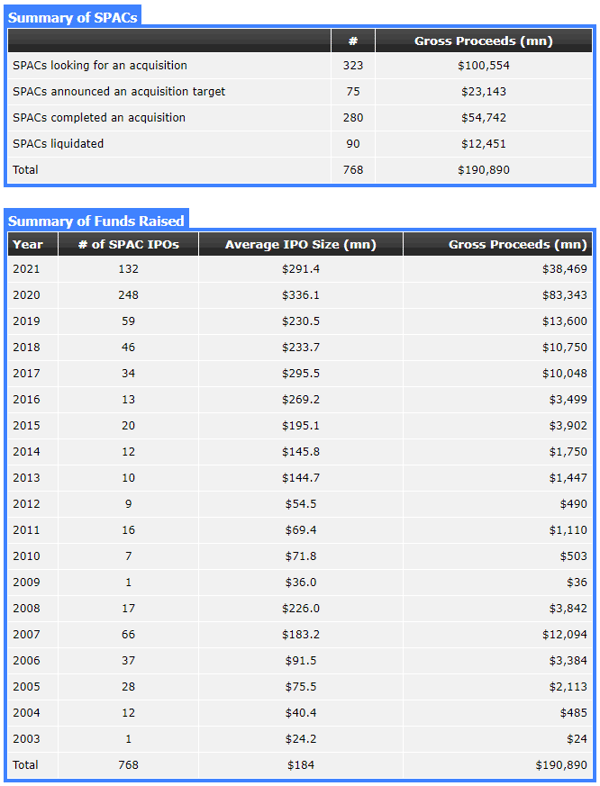 How can investors get into the SPAC hype?

Investors willing to be exposed to SPACs are able to do so, either by buying into SPACs directly, or by purchasing a related ETF (exchange-traded fund).

The SPAC and New Issue ETF is an exchange traded fund that tracks the latest, and is the first actively managed ETF giving investors an exposure to a broad portfolio of SPACs.

There is also the Defiance NextGen SPAC IPO ETF which boast an 80% concentration in SPAC-derived IPO offerings. The rest of the ETF invests in IPO companies themselves.

The underlying securities are U.S.-listed and have a minimum market cap of $250 million. The Defiance ETF aims to create a diversified and passively managed SPAC portfolio, according to its SEC filing.