U.S elections: What is the probability of a "blue wave" with Democrats winning the Senate?

Risk assets rallied last week as the chances of a "blue wave" went down significantly as Republicans seemed likely to keep the Senate. For Wall Street, a divided government (Biden President, Democrat House and Republican Senate) is the most favorable scenario for the market. A GOP senate majority should ensure that Trump’s pro-business policies stay intact (tax code, deregulation), and if Biden is confirmed we should be able to expect an easing of the trade war (which should boost global trade and corporate earnings growth). However, Senate control will not be known until after Jan. 5, 2021. Based on the latest information, the Senate split appears 50 Republicans and 48 Democrats. Neither the regular nor special Georgia Senate races had a candidate capture more than 50% of the votes, so a run-off will take place between the two leading candidates in each race. So if the Democrats win the presidency and both Georgia seats, we then have a "Blue Wave", which is suddenly not the best scenario for the market. Here, it's worth noting that the odds of Democrats winning both races are very slim, with Republican David Perdue well ahead of his Democrat challenger Jon Ossoff in the first race while the second one will see two GOP candidates combine to take on the two Democrats, with the republicans comfortably leading their democratic challengers (see below) - source: www.zerohedge.com 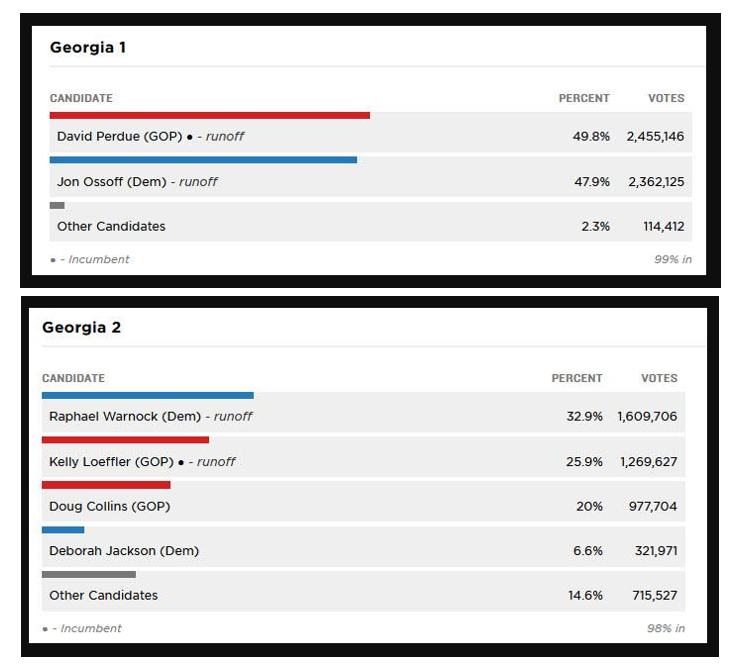