Lessons from the earnings season (so far)

As we are halfway through the earnings season, market reaction has been generally negative so far, mostly driven by fears of possible tightening. But how worried are business owners about the near-term growth outlook?

As we approach the middle of the earnings season, Q4 earnings have generally exceeded expectations. However, beats have come down from very high level, and some prominent companies (Meta, Netflix, PayPal) disappointed. Europe is doing better than the US, with yoy EPS growth up 58% (+19% vs consensus) vs. 30% (+5% vs consensus). Sales growth has been stable in Europe at 26%, while it has moderated in US (17%), also with higher beats in Europe vs. the US.

Companies’ observations reveal cost concerns have increased compared to Q3, but robust demand is offsetting the burden on margins for now, while guidance is overall positive and FY22 EPS estimates are being revised up. Capital returns announcements have been strong so far. Although investors’ reaction has been mixed and interest rate volatility continues to drive equity prices.

In Europe, the Q4 season began on a strong foot (except healthcare), with 59% of the companies beating estimates by more than 2%, with the reported EPS growth rate around 29% based on the companies that have reported so far. Defensives are delivering the majority of EPS growth while most beats have come from Cyclicals. Banks, technology, and luxury companies have recorded the strongest outperformance, with a beat rate of 81%, while the pharmaceutical and healthcare equipment has disappointed. Energy is a major driver of the index's earnings growth this quarter (53% contribution) thanks to the outperformance of Shell, while Lundin and OMV had slightly disappointing results. Industrials and materials results are mixed, as many companies missed operating margin forecasts, while their sales and backlogs were relatively strong.

Whereas in the US, of the 352 companies in the S&P500 that have announced results, 77% have posted better-than-expected earnings as compared with 82% a year ago. Cyclicals are delivering the strongest EPS growth and are ahead on beats. Tech and industrials are posting strong EPS beats, while materials and discretionary are lagging. Among defensives, utilities and staples are delivering the bulk of the beats, while healthcare and communication services are falling behind. Energy and financials EPS beats are broadly in line. Technology and energy companies are topping estimates the most on an earnings per share basis.

Inventories are on the rise

Companies that have reported Q4 results have seen their inventories rise by about 24% vs. last year and 18% against pre-pandemic levels. Given the higher level of activity and the disruptions to global supply chains, companies have at least temporarily abandoned their just-in-time production models and increased holdings of key components to meet demand. As a percentage of sales, inventory levels increased to 15.2% in 2021 from an average of 12.5% in 2019, though with nerve-wracking jumps in industrials (480 bps), healthcare, and consumer staples (220 bps each). Technology, where inventory build ups often trigger a slowdown in activity, has seen stock levels increase, in line with sales, leaving the inventory-to-sales ratio at a reasonable 17%.

Rising bond yields are stealing the headlines to earnings announcements. To date, the US stock market is rewarding positive earnings surprises (+0.3%) less than average (+0.8%) and punishing negative earnings surprises (-3.3%) more than average (-2.3%). Similarly, in Europe, average share price action, net of the Stoxx 600 return, has fallen for both companies beating and missing expectations. The moves are sharper for names disappointing at the EPS level (2.1% decline vs. 0.7%) as most of the negative surprises are coming from operating margins, pressured by supply shortages and rising costs. Industrials are seeing the worst moves with an average loss of 1.6%. 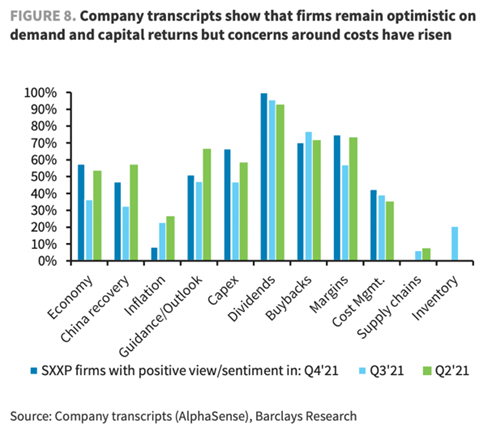 There has been an uptick in announcements on both dividends and buybacks in Europe thus far, providing much needed support for equities in a rising rates environment. However, despite the constructive outlook and capital return announcements, price reaction has been negative.

The outlook remains generally constructive. Guidance from companies in Europe has been predominantly positive or neutral. Inflation and rising costs are a key concern for firms. However, overall demand remains strong and nearly 70% of companies talking about the margin outlook had a positive tone. Consequently, upcoming quarters have been revised up sharply for SXXP but less so for SPX companies. In the US, companies reported a mixed outlook where EPS growth forecasts, in percentage terms, have improved for energy, materials, healthcare, and tech sectors, and have weakened for consumer discretionary, communication services, financials, and utilities.

In Europe, cyclicals have seen the bulk of upgrades to FY estimates so far ytd, led by transport, energy, semis, mining and durable goods. On the flip side, real estate, telecoms, retail, leisure and media have had downgrades. In the US, autos, energy, biotech, financials and materials have seen the biggest upgrades. 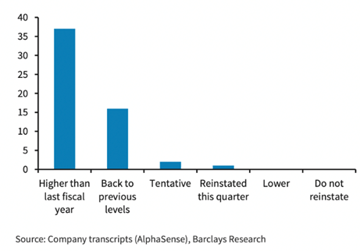 Despite some big misses, overall Q4 results are beating estimates, with cleaner delivery in Europe than in the US. Although cost inflation bites on margins, guidance is generally positive, and companies remain upbeat on demand. Financial conditions are likely to tighten somewhat but they remain extremely loose by historical standards. And volatility, which typically rises into and around starts of policy normalization and falls afterwards, as jitters around the move to policy normalization subside, could ease as it becomes clear that the up cycle has not been derailed.