The trend in the USD is down and in currency markets it is usually a good idea to follow the trend BUT.... here are some reasons not to.

Shorting the US dollar has now become a very consensus trade. That stands to reasons because the buck saw the biggest monthly decline in July in a decade and the masses are jumping to ride the wave even lower. 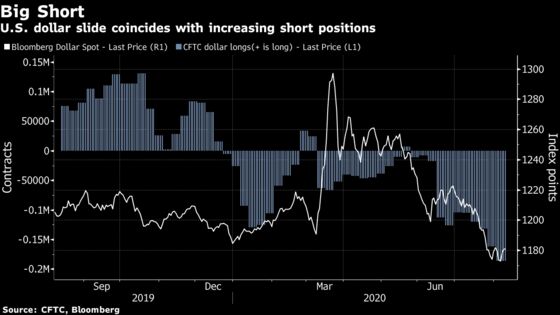 The chart above shows increasing short positions as the dollar moves lower
The broad logic of ‘Don’t fight the Fed’ is sound - and while the dollar may still ultimately weaken if the Federal Reserve loosen policy again- there are some catalysts we are eyeing for a rebound.

1. Europe second wave - Germany and France are seeing the highest daily coronavirus counts since reopening, which dampens the European economic recovery.
2. US cases coming down - This is possibly because of less testing, but it does appear that each state is going through the phases of a steeper, flatter then downward sloping curve.
3. US election - odds between Trump and Biden probably tighten before November 3rd and Trump just said he could chop capital gains tax to 15%.
4. Treasury auctions - The extra supply in the last week seemed to be shifting US yields higher, although yields overseas moved higher too. The Treasury will issue 20 year bonds next week.
5. New Zealand - The RBNZ just opened the door to negative rates and increased bond buying, largely because of the new cluster of coronavirus cases in Auckland. More monetary easing could come abroad before it does in the States.
6. No stimulus- Without a new stimulus deal agreed in next few weeks, the US economic recovery will be under threat. Though Trump has put a plaster over the wound with executive orders, they may not even work.
7. US-China relations - The rising tensions have really not been a factor whatsoever in the broader trend higher across markets, though arguably cyclical stocks have underperformed in part due to this. New talks start again tomorrow (Aug 15).

The dollar index is consolidating around 93; were a bullish short-term scenario to play out - it could come via a breakout straight through 94 - or another slight drop to 92 and subsequent rebound.

These scenarios would correspond to a top in EUR/USD between 1.19 to 1.20 before a bigger pullback.

Read our next article : Us treasury market the moment of truth