A new EU/UK trade spat could send GBPUSD under 1.20

The British Pound has fallen more than 10% against the US Dollar this year, weighed down by Fed hawkishness, domestic inflation and growth concerns, Brexit-related difficulties and the fallout from the conflict in Ukraine.

While most of these factors can be thought of as external, pertaining to situations and elements beyond British control, Brexit-related issues have drawn particular scorn given that the UK government arguably brought these difficulties on themselves.

Brexit has been thrust back into the limelight over recent weeks given the government’s proposed changes to the UK-EU trade deal agreed upon in 2019.

Brexit: What Changes are the UK Government trying to make and why?

The crux of the issues comes down to how the current agreement impacts the political landscape in Northern Ireland. The power-sharing government in NI has collapsed this year as the DUP, second biggest party in NI, has refused to participate in government unless changes are made to the current terms of the deal.

As it stands, special arrangements have been made for customs checks related to the UK/Irish border in NI. Currently, goods going to NI from the mainland UK are checked at UK ports. Once on the island of Ireland, they are then free to move across the land border between NI and the Republic of Ireland (ROI), avoiding the need for a so-called “hard border” which many feared would create fresh political instability. However, the DUP feels that this arrangement undermines NI’s place within the union.

The UK government is now proposing changes to the legislation to remove the need for a customs border between mainland UK and NI, while still avoiding a hard border between NI and the ROI. The new terms would also give businesses in and operating with NI the choice between adhering to EU or UK rules, and establishing a dual system.

The EU has voiced staunch opposition to these proposals, vowing to respond with strict measures if such changes are made. While negotiations continue, for now, the situation has exacerbated political uncertainty in the UK given the widely polarised views over how NI should be treated. The risk is that any changes might ignite a trade war with the EU, coming at a time when the UK is already suffering as a result of elevated inflation, likely making the situation far worse.

What else is moving the GBP?

Inflation in the UK was seen hitting 9% in April, marking fresh 40-year highs. Soaring energy prices, ongoing supply issues, the release of pent-up, post-pandemic demand and Brexit-related issues have all contributed to a highly inflationary environment. Added to the mix now is the recent tightening operation from the BOE. Given the macro environment, BOE governor Bailey recently warned that a major downturn is likely to hit over the remainder of the year as surging inflation and tighter monetary conditions weigh on growth.

In light of the issues facing the UK economy over recent months, GBP has been on a firm downward path. Non-commercial players (hedge funds and institutions) have been loading up short positions which now sit at record highs of around £5 billion, last seen in 2019. With stagflation and recession casting a dark shadow over the economy GBP long’s have seen little demand of late expect for against the equally obliterated Japanese Yen. 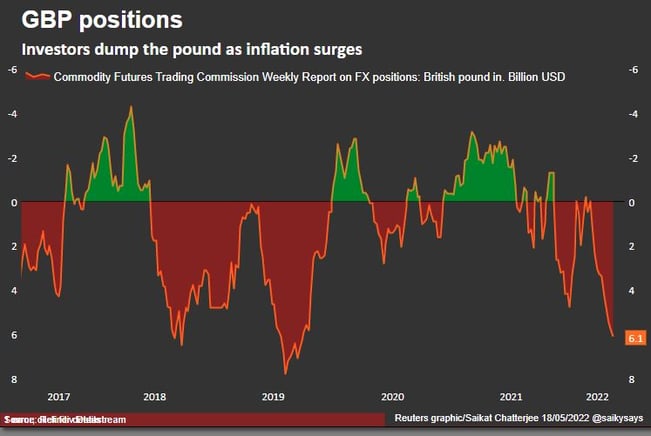 Looking at the balance of risks and where the next big move is coming for GBP, it seems hard to imagine another material move lower, near-term. With non-commercial short positioning at record levels and with much of the current and impending threats to the UK already well-signalled it feels as though the better opportunities would be found in playing a reversal higher.

With short positions so elevated, the market is highly vulnerable to a short squeeze. If we’re thinking about drivers for a positioning clear-out, the obvious one would be a change intact from the BOE.

So far, the BOE has taken a “softly-softly” approach to tightening monetary policy. The BOE was late to lift rates last year and has so far stuck to modest incremental increases. Looking across the pond at the Fed, the likely shift in gears becomes clear to see. With the Fed hiking by 0.5% this month and signalling further such hikes to come, along with greenlighting the potential for even larger hikes, the BOE will likely be forced to step up the pace of its tightening. While this is at odds with the BOE’s latest message, it is precisely this shift in attitude which has the potential to cause a reversal higher in GBP over the coming months. Finally, let’s take a look at the chart to assess the technical layout. 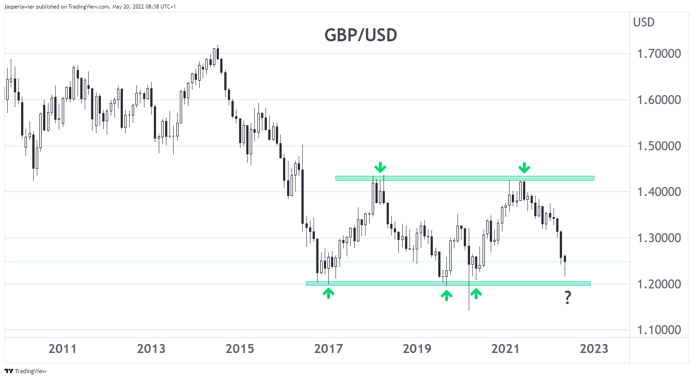 Looking at the chart we can see that GBPUSD has been trading in a range between 1.20 and 1.42 since bottoming in 2017. This sideways market is either a major bottom- or a rest before another leg lower- perhaps even towards parity. The price has recently bounced ahead of the bottom of the range, showing early buyers stepping in. Should the bounce take hold, the 1.30/32 mid-point of the range could be major resistance as sellers re-enter in anticipation of a breakdown from 1.20.