AR/VR: the next frontier for tech giants?

The Augmented Reality (AR) market is expected to grow from USD22 billion in 2021 to USD88 billion in 2026, more than 30% annually. The tech giants are all involved, but who is leading the race?

Augmented reality (AR) is the integration of digital information with the user's environment in real-time. Users experience a real-world environment with generated perceptual information overlaid on top of it. Most consumers have been interacting with AR through filters on social media platforms and somewhat on wearable devices. It is believed that by 2025, 75% of the global population and almost all smartphone users will be frequent users of AR. From shopping to communications in enterprise or gaming, the new technology has an abundance of applications, and its adoption is accelerating with the availability of high-speed connectivity.

The race to develop AR devices

Unsurprisingly, physical products can help foster growth of a new category, as consumers can relate best with something they can touch. On that note, the increased usage of augmented reality devices in consumer, commercial, and enterprises (manufacturing) applications is helping the category grow.
AR/VR devices are a key area of focus for tech giants. Meta, Amazon, Apple, Microsoft, Google (and Magic Leap), Samsung, Sony, and ByteDance’s Pico have all launched a version of their AR headsets or are in the process of doing so. 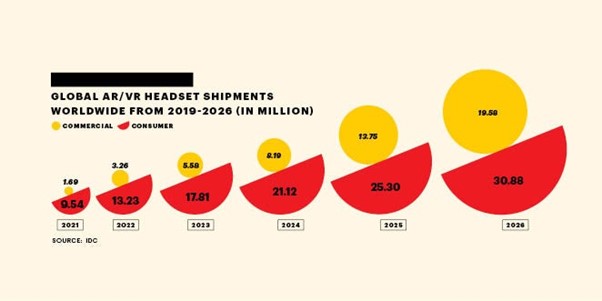 • Meta is the undisputed leader in the rapidly growing market for VR headsets, with headsets shipments in 2021 increasing 92.1% over the previous year. It is so committed to developing the AR market that it rebranded as ‘Meta’ from ‘Facebook’ previously and opened its first hardware store in California to give its consumers a first-hand experience of AR goggles and glasses. 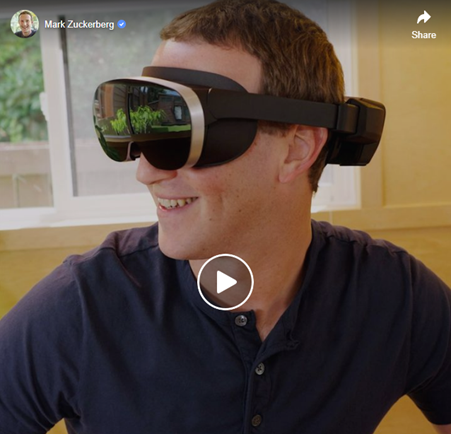 • Apple is closing in on the race, planning to release its AR glasses and second-generation AR/VR headset next year. It will be Apple’s first major release since the Apple Watch in 2014. Apple benefits from strong brand awareness and it is likely that die-hard fans will quickly want to try any Apple-branded novelty.
• Microsoft is approaching the Metaverse and AR technology from several angles. First, its enterprise collaboration communication tool Mesh helps users connect through mixed reality applications. Microsoft is also venturing into the “industrial metaverse”, where companies such as Kawasaki will interact with Microsoft’s metaverse technologies such as its HoloLens headset for its factories to help produce robots. Finally, Microsoft is expected to further develop its AR ambitions in gaming, helped by its (still in process) acquisition of Activision Blizzard. 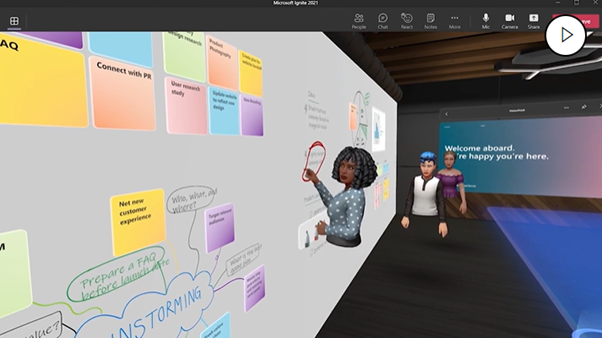 According to researchers, by 2026, 25% of the population will spend at least one hour a day in the metaverse for work, shopping, education, social, or entertainment. Some strong believers, such Mark Zuckerberg, envision that the metaverse, or the immersive internet experience, will shape future long-distance interactions, with plenty of applications for the workplace such as business or team meetings.

The Facebook co-founder, revealed during the earnings call in July that the business model for the metaverse wouldn’t focus on selling devices at large premiums, but instead, it would rely on selling cheap hardware to get consumers to spend once connected.

Applications could range from seasonal employees teaching apprentice workers through video chat, to repairing a fighter jet, to simply using AR for team meetings with each team member having their own avatar. Meta’s Horizon Workrooms and Microsoft’s Mesh are ambitious attempts to create tools for virtual collaborations across multiple devices.

What are the challenges?

It is still not clear how long it will take tech giants to develop strong solutions that can be adopted by many consumers and businesses. Convincing consumers could take time, which could end up being costly, potentially needing many years of investments before seeing profits. On that note, Meta hinted in April that the tech giant’s metaverse investments may take a decade to see a return.
Similarly, chip makers such as Nvidia need to debate a range of technical issues as well as privacy and identity, which could slow the development of AR solutions used for communications and other sensitive areas where regulators could intervene.

While the market for augmented reality is likely still in its early stage, it is growing at a fast pace. Tech giants are developing a range of solutions supported by AR, but whether consumers are ready to rapidly incorporate them into their daily lives remains uncertain. The enterprise market and entertainment avenues such as gaming look very promising as the first areas of mass consumer adoption. Meta and Microsoft are clearly the leaders in AR solutions, but Apple is catching up and benefits from having an extremely strong consumer brand.