Bitcoin to Dollar Currency War: The Fiat Strikes Back

Can we view what has been happening in cryptocurrency and forex markets over the past 18 months as a giant currency war between fiat and crypto? If yes, how will Bitcoin handle a new strike from the US dollar?

But let’s consider the two biggest motivations for institutional investors to dabble in Bitcoin over the year or so.

Let’s get this out of the way first. The negative correlation between the US dollar and Bitcoin is not stable on a day by day or week by week basis. It fluctuates wildly. Thus, you can correctly make the argument that Bitcoin is ‘uncorrelated’ and a way to diversify a portfolio, just like Managed Futures.

However, we are raising the possibility that the two dominant trends in the US dollar and Bitcoin over the past 18 months since the onset of the COVID-19 pandemic have been in sync. 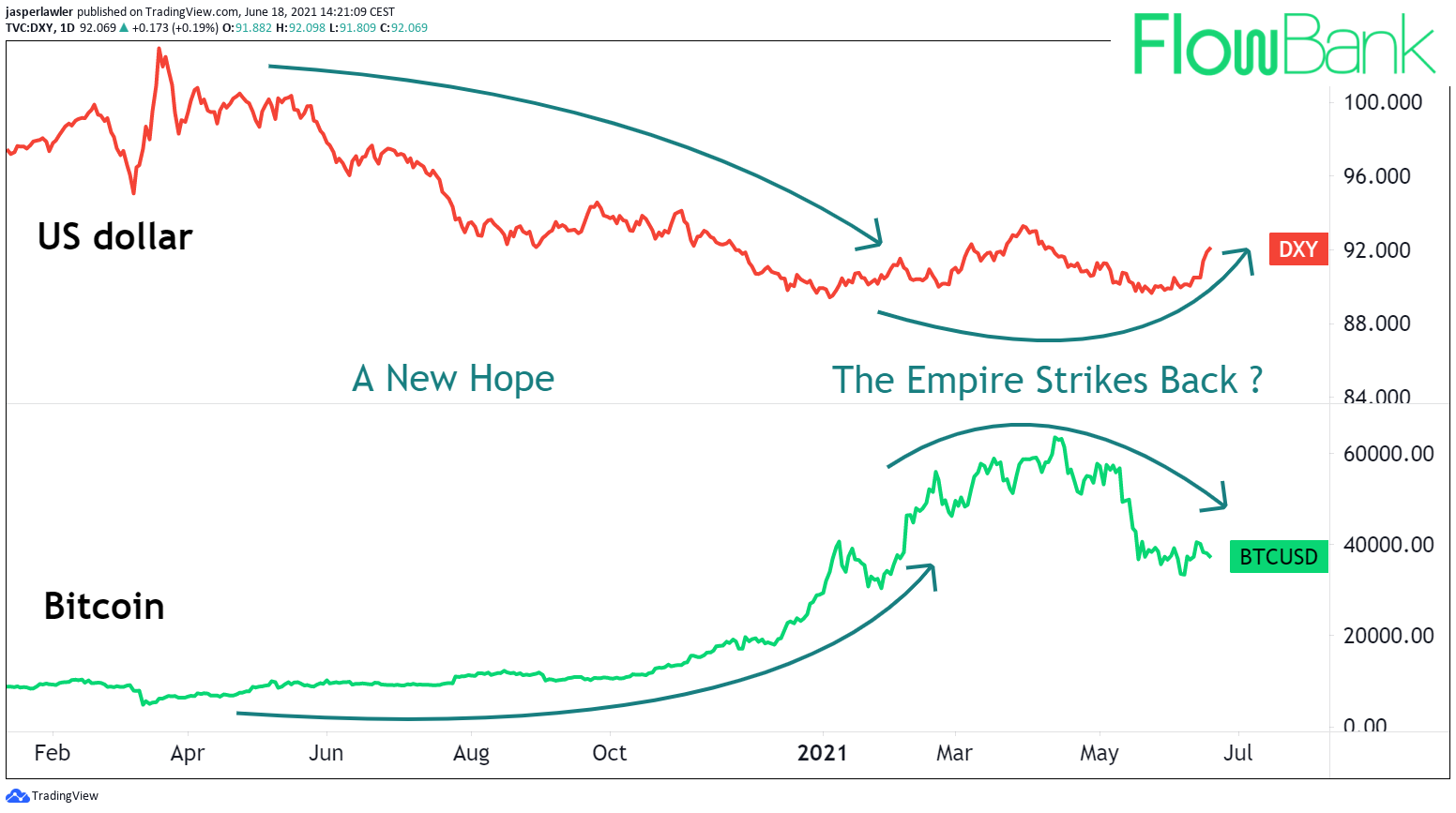 March 2020 to March 2021 was ‘A new Hope’. People were losing faith in the US dollar and looking for an alternative monetary system they could put their faith in – the idea of crypto investing went mainstream with Robinhood and Coinbase accounts.

January 2021 to June 2021 is the ‘Empire Strikes Back’. While Bitcoin was still rallying, investors started to wonder whether higher inflation would force the Fed to cutback its record levels of stimulus. The dollar gained ground in the first quarter of 2021 before backing off and now it has rallied again after the Fed confirmed it is now on the path to tapering.

Why is a strong dollar bad for crypto?

We have identified three ideas that could explain the potential dollar-Bitcoin negative correlation: Risk on / Risk off, inflation and stablecoins.

Risk on / risk off

Basically, cryptocurrencies are ultra-risky and the dollar is the ultimate haven when investors are seeking liquidity. It stands to reason that investors will hold more crypto in a risk-on environment and hold more dollars in a risk-off environment.

There are issues with this though. What motivates the cryptocurrency universe to feel bullish is not always in sync with the rest of the investing universe. A tweet from Elon Musk is not enough to send the S&P 500 lower by 10% (we hope!). The overall market cap for cryptocurrencies is also not enough to influence the flow of funds between other major asset classes.

The same idea that carried gold to a record high of over $2000 per oz in 2020 helped the rally in Bitcoin price index too.

That idea is accounting for the possibility of rapid inflation. The inflation would come about by the Federal Reserve continuing to rapidly expand the money supply via QE at the same time commercial banks also expand the money supply through new loans in a rapidly recovering economy. When money (US dollars) is losing value, it pays to hold assets, hense demand for reliable Bitcoin wallets.

But, what we have just heard from the Fed is that they will not continue QE forever. It’s possible that they are wrong and that they have boxed themselves into a corner, but we can’t know that for sure yet – so for now – don’t fight the Fed! The Fed has said it will reign in the stimulus soon and markets are taking their word for it and by doing so, assuming that the dollar will no longer be debased with rapid (hyper?) inflation.

So here is where we have possibly gone one step deeper into the fiat vs crypto currency war.

To learn more about Tether, read our blog ‘What is Tether?’

There is growing evidence, including charges by the New York Attorney General, that the biggest stablecoin, and possibly other stablecoins are counterfeits. You can read the above to see that this could also involve Bitcoin exchanges. By that we mean that they are not backed one: one by fiat currency as they were originally designed to do. We are not saying that they are counterfeits, but hypothesising about the implications if it were true. 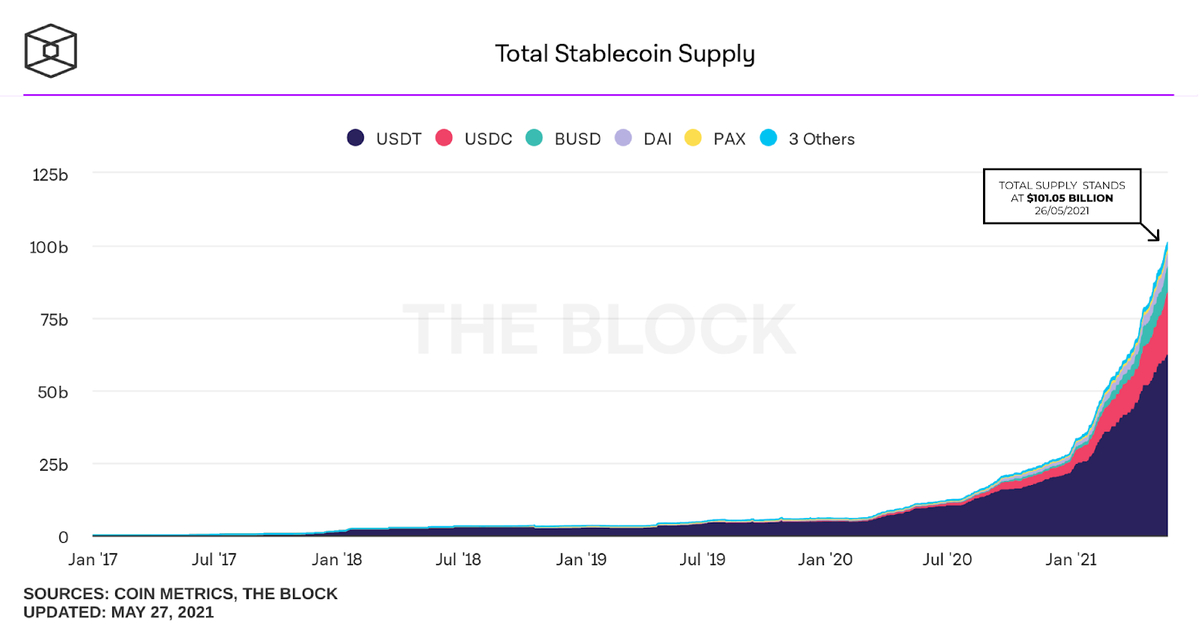 If stablecoins were counterfeits, that would not be an issue when people don’t want dollars. People are selling dollars and buying stablecoins as well as all sorts of other assets. The issue would be when people do want dollars. When people need dollars, they sell their assets and expect to be redeemed in the market value in dollars. You buy a property in dollars, and you sell it and get dollars back (hopefully more of them!). More demand for dollars in forex markets naturally sees world currency prices fall - and can often pressure currency pegs backed by governments.

If the stablecoins are counterfeit, the first people to sell their stablecoins will get one full dollar. But just like a Ponzi scheme, you wouldn’t want to be the last to get out– not even in the middle - to make the exchange, because you could easily end up with nothing, or pennies on the dollar.

When the dollar is rising, it means people want dollars – and probably not crytos.

There can still be a Return of the Jedi (Bitcoin)…