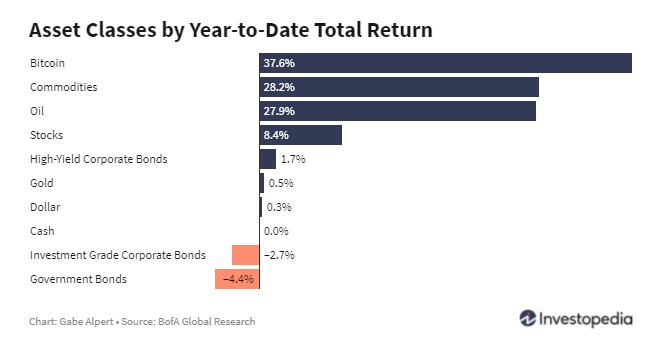 With a $800bn Market Cap, Bitcoin is worth "only" 0.5% of the world global assets. Still, the crypto crash attracted massive media and market attention this week as the -53% drawdown of Bitcoin from peak to through this month is comparable with what happened in March 2020. Triggers for the crash was a tweet from Elon Musk saying Tesla will not accept Bitcoin as a mean of payment and also that China reiterating its warnings on cryptocurrencies. As Bitcoin came close to $30,000, Elon Musk tweeted on Wednesday afternoon that Tesla has diamond hands.", implying that the electric vehicle maker would not be shedding its $1.5 billion stake in bitcoin. Elon's tweet has helped stabilize the rout in bitcoin. Another sell-off took place on Friday afternoon. Just two days after the PBOC barred financial institutions from accepting bitcoin as payment, China's vice premier Liu He said that China will crack down on bitcoin mining and trading activities, which of course is what we already knew. The selloff has pushed bitcoin back under its 200DMA again. Other cryptocurrencies sold off as well.

Story #2: Mixed returns for US stocks.

Stocks posted mixed results in a volatile week of trading, with the large-cap S&P 500 Index ending modestly lower and the tech-heavy Nasdaq Composite Index gaining a little ground. Nasdaq 100 was down 4 straight weeks going into Monday and avoided a 5th straight weekly loss - which would have been the worst streak since 2012. These mixed results likely reflect strength in the U.S. economy, as well as concerns about inflation and the timing of when the Federal Reserve might begin to rein in its accommodative policies. Within the S&P 500, the health care posted the largest gain. Energy and industrials lost ground.

Story #3: Fed hints it may discuss tapering of asset purchases

Minutes from the Federal Open Market Committee’s (FOMC) meeting in late April offered additional insight into policymakers’ thinking on the economy and inflationary pressures. Investors focused on a statement that “a number of participants” suggested that policymakers “begin discussing a plan” for tapering the Fed’s monthly asset purchase program, which stands at USD 120 billion, i.e the Fed is thinking about thinking of tapering.

Preliminary estimates for the IHS Markit Flash U.S. Composite PMI came in at a record 68.1 in May—a significant improvement from April’s 63.5 reading and above the consensus forecast. The service sector component of the survey was especially strong, with the flash PMI reading climbing to a record 70.1 from 64.7 in April. PMI for the manufacturing sector advanced to 61.5, a month-over-month improvement from 60.5. The preliminary PMI data also highlighted inflationary pressures in the U.S. economy, with the rate of input price increases surging to a record and output charges recording their sharpest rise since October 2009, when data collection began.

U.S Treasury yields were roughly unchanged for the week. Wednesday’s sharp sell-off in cryptocurrencies sparked a bid for Treasuries. However, yields soon increased following the release of the FOMC’s April meeting minutes, which led investors to pull forward their expected timeline for rate hikes. But despite strong PMI numbers on Friday, the long end of the curve remains capped despite as the Fed continues their Treasuries purchase. In Europe, core eurozone bond yields ended higher on expectations that the ECB could slow its bond purchases. Peripheral eurozone bond yields fell. UK gilt yields fell on concerns about the spread of a new coronavirus strain and its potential to delay the full reopening of the UK economy.

Shares in Europe rose on signs that the economy is rebounding as COVID restrictions begin to ease with France, Italy, Ireland, Portugal, and the Netherlands began the gradual reopening of their economies. However, worries about inflation curbed gains. The pan-European STOXX Europe 600 Index ended the week 0.43% higher. The UK’s FTSE 100 Index fell 0.36%, as strong economic data lifted the British pound versus the U.S. dollar. The UK moved to phase two of its plan for lifting coronavirus restrictions—allowing social mixing indoors, greater physical contact, and foreign travel—despite official concerns over a rapidly spreading variant of the coronavirus.

Eurozone business activity accelerated at the fastest pace in three years in May as virus containment measures eased, a survey of purchasing managers by IHS Markit showed. The flash composite PMI reached 56.9 versus 53.8 in April. The services sector index climbed to 55.1 from 50.5. In the UK consumer price inflation accelerated to 1.5% in April from 0.7% in March.

After growing at a double-digit rate over the previous two quarters, Japan’s economy shrunk by an annualized 5.1% in the first quarter—a sharper contraction than expected. The decline was mainly due to a drop in private consumption as coronavirus containment measures curbed spending on clothing and dining out. Public consumption expenditure was also weak. Import growth outpaced exports, with growth in the latter slowing markedly as global semiconductor shortages exerted a drag on overseas shipments.

Chinese stocks recorded a mixed week. The Shanghai Composite Index shed 0.1%, while the large-cap CSI 300 Index added 0.5%. Economic data were mixed, with strong external demand offsetting softer domestic demand as residential construction and infrastructure investment slowed. Retail sales growth slowed to 4.3% in April on the two-year average—which analysts use to minimize distortions from the 2020 pandemic—down from March retail sales growth of 6.4%. A resurgence of coronavirus cases in several Chinese provinces has raised worries that COVID-19 still has potential to stifle a recovery in household consumption.

Story #10: Commodities fell for the 2nd week in a row; Gold rallied.