The Walt Disney Company (DIS) is capturing the attention of investors after it reported stronger 3Q2022 financial results on August 10. Let’s have a look at how the entertainment giant is doing in the streaming business and what positive catalysts lie ahead.

One of the streaming leaders

Victim of its post-covid success, the film producer gave up gains achieved during the pandemic as analysts shifted focus from subscriber growth to profits. Analysts were also skeptical that the entertainment stalwart could meet its subscriber base forecast for Disney+.

But those fears now seem behind us as Disney reported earnings that wowed thanks to solid Disney+ subscriber gains and healthy theme park attendance. The entertainment giant added 14.4 million subscribers during the last quarter, whereas its main rival Netflix lost nearly 1 million.

All in all, across its streaming brands, Disney now boasts a total of 220 million subscriptions, exceeding all estimates thanks to the quality of their execution. Last quarter, the streaming (direct-to-consumer) business grew significantly, generating USD5.1 billion in revenue. And management is confident that the segment could generate over USD20 billion in revenue this year.

This puts the company precisely on track with its 2020 goal to hit 300 million subscribers by 2023. The direct-to-consumer business has become a key area of focus as it is expected to be the main driver of growth going forward. Of course, other segments of the Walt Disney Company are very profitable, certainly, but mature.

What is Disney+ Day?

Looking ahead, Disney+ Day approaches and this day is usually a positive catalyst for the stock. The event celebrates the Disney legacy across all platforms, and for the streaming platform, this means the premiere of highly anticipated movies, specials, series, and short films.

This year, it will be on 8 September and the program will feature the streaming premiere of Thor: Love and Thunder, Pinocchio, Obi-Wan Kenobi: A Jedi’s Return, a new The Simpsons short focused on Lisa Simpson, and sing-alongs for both Frozen and Frozen 2. Guests with a Disney+ account and their party will be allowed to enter the theme parks 30 minutes before everyone else. 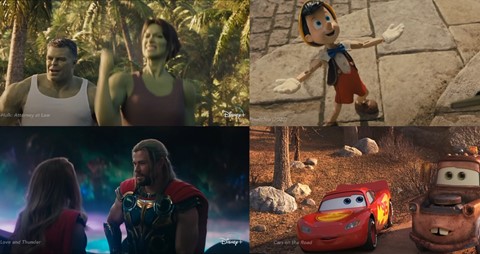 New additions for Disney Plus Day 2022 (Sept. 8). Marvel’s "Thor: Love and Thunder" and "Obi-Wan Kenobi:
The Return of the Jedis" areamong the streaming portal's top reboots.

This day, beyond a lot of fun for kids and their parents, has a lot of potentials to boost Disney+ subscriptions and sales. It is an event that creates a perfect synergy between existing services and keeps the brand and what it stands for alive in the spirit of its customers.

Is streaming taking over the box office?

There is some fear among analysts that Disney’s cineplex business may no longer align with contemporary consumer interests. At first glance, it seems a legitimate question: why would people go to the cinema if they could just spend a few bucks a month and stream videos on demand?

Taking a dive deeper, one realises analysts could be looking at this narrative incorrectly. Back in 2000, the domestic box office featured a wide range of genres, from action movies to comedies, and Hollywood studios gave spectators exactly what they wanted. Fast forward to today, the situation has changed dramatically. In 2021, the top 10 grossing films mostly featured science fiction or comic-book-related films, among which 3 were distributed by Walt Disney.

These recent trends aren’t new to Disney. The owner of Marvel Comics and Star Wars has been constantly evolving and anticipating new trends in the industry. And now more than ever, the entertainment giant seems to be well positioned to compete with the most competitive rivals thanks to its diversified business model and its unique brand.

Activist investor Third Point and its suggestions for Disney

Recently, activist investor Third Point has been increasing efforts in the filmmaker to optimise capital efficiency, positive news for the stock. The money management firm disclosed a "significant stake" in the entertainment giant and urged it to consider implementing some changes — five, to be exact. Mr Daniel Loeb, CEO of Third Point, said these changes have the potential to unlock further value in the near term.

The changes include cutting costs, suspending its dividend payments to shareholders to keep more cash for stock buybacks or debt reduction, considering buying back its minority stake in streaming rival Hulu from Comcast, and possibly spinning off the ESPN business.

Investors were delighted by the news; the stock rose an additional 2% on top of the 5% it gained the previous two days, following its earnings report.

Investors speculating on Disney’s future performance might have been inspired by the company’s strong third-quarter results. Recent price action suggests investors appreciate Disney’s significant growth potential in the streaming business and durable strength at the Parks. And while some analysts are sceptic about Disney’s recent business strategies, the reality is that the entertainment industry has changed. And thanks to its diversified business model and its unique brand, the entertainment giant is well positioned to weather current challenges.