Investing in Japan has been difficult at best in the years after the Asian financial crisis but multi-year highs in Japanese stock indices and a new Prime Minister suggest newfound optimism.

Latest news for investing in Japan

The ruling political party of New Japanese Prime Minister Fumio Kishida won a clear majority in Japanese parliamentary elections held last week (October 2021). The hope among the electorate is that Kishida can succeed in revitalising the Japanese economy where his popular predecessor Shinzo Abe tried and failed.

The optimism is seemingly shared by investors with Japanese stocks gaining on news of the election victory. The Tokyo Stock Exchange rose 2.2% while the benchmark Japanese stock index the Nikkei 225 jumped 2.6% the Monday after the result was announced. Japanese indices have continued to gain ground since but remain below recent multi-decade highs, suggesting there might still be value left for those uninvested.

The Nikkei 225 struck a fresh 29-year high in September. However, it proved to be a false breakout and the price dipped back inside a 9-month old trending range. 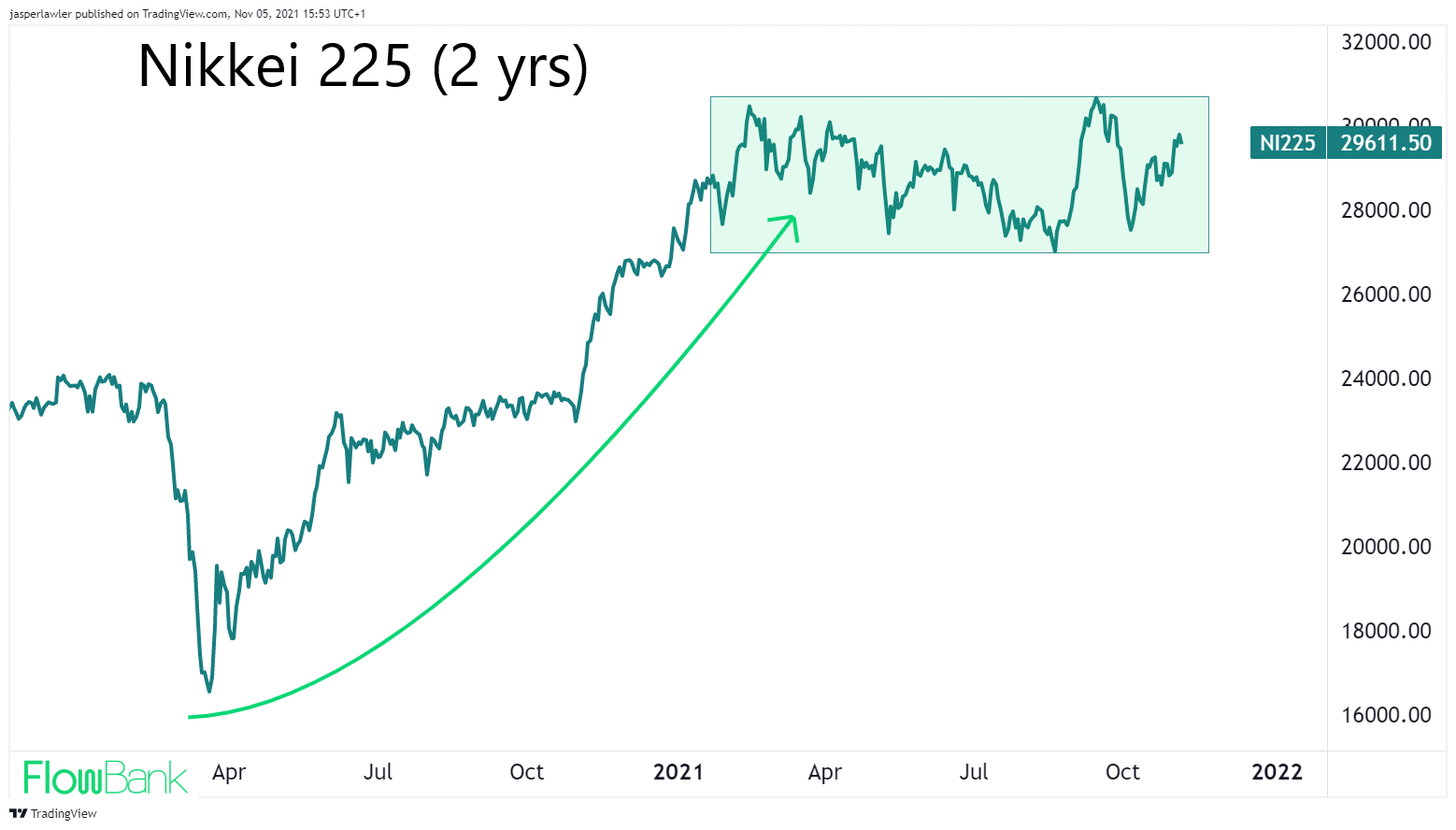 The multi-month consolidation follows a huge breakout from a 29-year old base to reach the 30,000 level for the first time since 1992. Should the price hold a break above 30,000 then it brings forward the possibility of a new record high with perhaps a test of 40,000 for the first time. 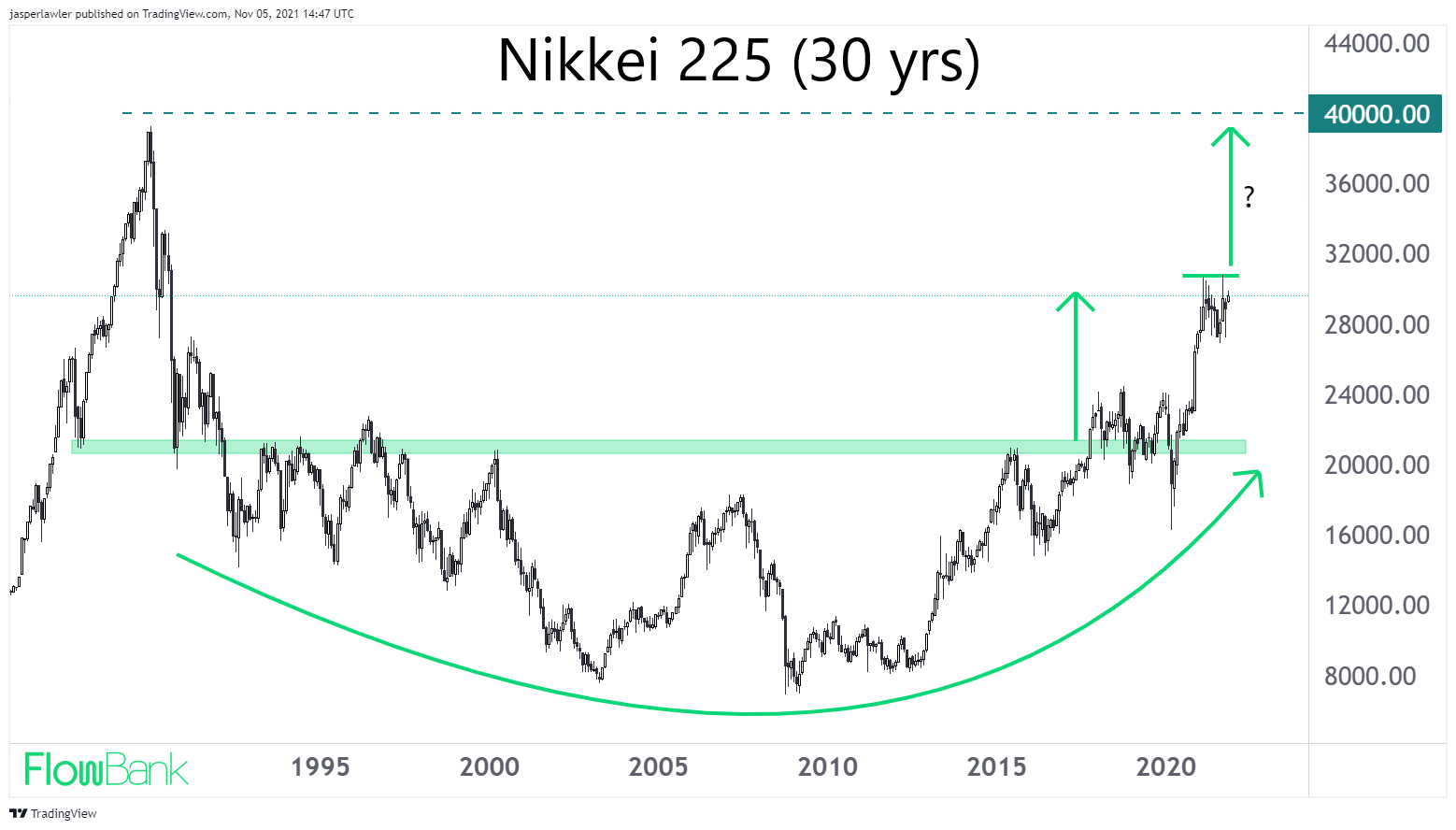 Shinzo Abe was Japan’s longest-serving prime minister. He was still liked among Japanese when he stepped down in 2020. This was less the case with Yoshihide Suga, who stepped down as PM for health reasons in September. It was when Suga announced the news of his departure that the Nikkei 225 last rose above 30,000.

The incoming Kishida has championed what he calls "new capitalism," which during campaigns appeared to imply some wealth redistribution favoring the middle class. More likely it is another meaningless political buzzword. In a signal that he will maintain the status quo for the business environment, Kishida backtracked on a plan to raise the capital-gains tax on investments.

The political optimism has been buttressed by generally well-received earnings from Japanese corporate heavyweights. Household names including Sony and Fast Retailing (parent of Uniqlo) as well as tech investing high-flyer SoftBank have all seen big profit growth during the recovery from the pandemic. In its Q3 earnings report Sony raised its profit forecast for the fiscal year through March 20-22 to 730 billion yen ($6.4 billion).

Over a year ago in August 2020, legendary investor Warren Buffett surprised investors in Berkshire Hathaway with a rare foray outside of the United States. Buffett and colleagues made a $6 billion investment in Japan’s five biggest trading companies. This included Itochu, Marubeni, Mitsubishi Corp, Mitsui and Sumitomo of "slightly more" than 5%.

The positions were acquired over a period of approximately twelve months through regular purchases on the Tokyo Stock Exchange. Buffett has been coy about the reason behind his Japanese investment thesis but it would appear to be a diversified bet on all the different industries these firms are involved in from steel to shipping to commodities to retail. In essence it seemed like a bet on Japan.

Japan has not been immune from the retail trader boom. The surge in Japanese stock markets to their highest in nearly 30 years matched a surge in interest in stock trading by retail investors in Japan. Like in other parts of the world from the US to India to Switzerland - individual investors have cottoned on to the idea that stock markets will ‘keep going up’ or ‘always bounce back’ while central banks keep printing money. It will be difficult to shake this mentality until central banks tighten policy on a sustained basis.

Risks to investing in Japan

When equities or indices breakout to new highs, valuations will tend to be high too - and this is the case for Japan right now. The Tokyo Stock index currently has a P/E of over 33, making it more expensive than a P/E ratio of 29 for the S&P 500.

Japan's economy has stalled in the third quarter of 2021. Nomura forecasts GDP growth shrank -0.6% in Q3 after rising 1.9% in Q2. The economic difficulty came as the country was hosting a difficult year-late 2020 Olympics during a spike in COVID infections this summer. However the infections look to have peaked and 71% of Japanese citizens are fully-vaccinated.

Central banks around the world are entering a tightening cycle. With such low inflation compared to the rest of the world, economists expect the Bank of Japan to be one of the last to let go of pandemic era stimulus. Bank of Japan Governor Haruhiko Kuroda remains in situ from the era of Abenomics. The governor recently described the recent weakness in the Japanese yen as "certainly positive" for the Japanese economy, adding that it has dropped "only a little."

This would imply weak Japanese yen (strong USD/JPY) as traders seek higher yielding currencies. A weak yen is generally associated with strong Japanese equities because of its benefits for exporters. The risk is that the BOJ falls behind the curve and is forced to quickly catch up, creating the risk of a sudden revaluation of the yen.