Robinhood IPO: offering a risky privilege to its users

Trading platform Robinhood has recently filed the prospectus for its long-awaited IPO. The S-1 has its share of pains and gains. What is to be expected from this event, and what should investors be weary of?

Robinhood is an online brokerage company that offers an intuitive, easy, and commission-free experience to users. In addition, they offer a very well-furnished section of educational content to learn about financial markets, trading, and macroeconomic cornerstones, as well as a quality newsletters and podcasts published every day of the work week.

The goal of the two founders, Vlad Tenev and Baiju Bhatt, was to give an opportunity to the American public to trade and own companies they love without having to deal with a middleman and face commission fees.

The increasing involvement of the retail trader is exactly the push Robinhood needed. As of the end of March 2021, the company counted 18 million funded accounts on its app, more than double the customer base a year earlier, with 5.5 million new funded accounts in the first quarter of 2021 alone. Sure thing, no one wanted to miss the buzz on GameStop and Dogecoin. 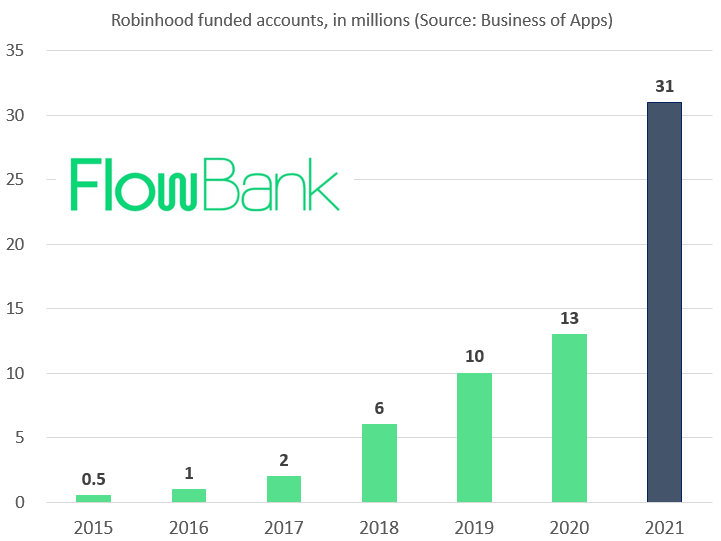 Number of funded accounts on the Robinhood trading app (Source: Business of Apps)

Speaking of cryptocurrencies, we ought to note that it is also a major growth factor for the company, with the average number of crypto trades multiplying by a factor of 14 in the past year, and the net value of all crypto going from $480 million to $11.6 billion on the platform.

What investors should know about the IPO

Robinhood markets will be trading on the Nasdaq under the stock ticker “HOOD”. While we do not yet know how many shares will be offered and at which price – although the Wall Street Journal reported a $40 billion valuation –, an interesting detail about this IPO is that Robinhood is planning to set aside between 20% and 35% of its IPO shares and leave them allocated for their users to purchase, which is a much larger allocation than the traditional IPO. This move comes from the company’s vision of “democratizing finance for all”.

This coincidently comes at the same time as their new service called “IPO access”. The company has a project to make IPO trading more accessible to retail investors, since it is currently a practice reserved for the bigger players. This way, retail players will be able to invest in IPOs at the launch price, without any minimum required on the amount invested.

This clearly indicates that Robinhood most likely wants its users to start investing in IPOs, and especially their own. This is a first-time thing, as IPOs are usually only open only to larger players such as mutual funds, hedge funds, endowments, etc. Retail traders usually must wait until the shares are traded on a market. But by this time, the stock often comes with a price premium. However, this generous-looking privilege also comes with its load of risks.

This looks good but it is not all green

Investors should bear in mind that IPOs often come with great volatility as the company sorts out what the company is truly worth. Some stock prices can soar, but others are smashed to smithereens. Also, Robinhood has already faced complaints for allowing unsophisticated investors to take risks they most likely do not fully understand and paid the lofty price of $70 million to the SEC for that among other allegations.

Additionally, requesting shares early does not mean getting them. The more demand there is, the harder it is to get the asked for shares. If all 18 million Robinhood traders asked for shares when the broker IPOs, they would only receive a few per account, if any.

Finally, every trader should carefully consider the S-1 filing, the company’s financial and the potential risks associated with such an investment before making any moves. Let us have a look at these. 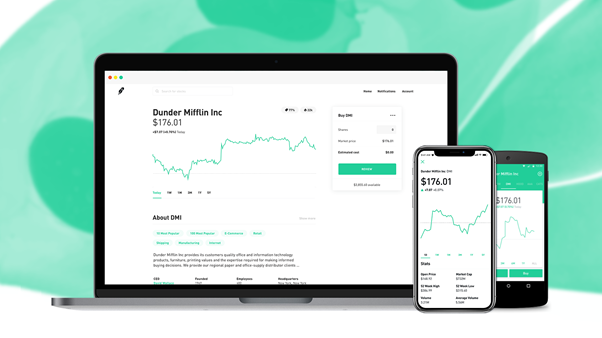 After carefully reading the S-1 filing of Robinhood Markets for the listing of its class A common stock, there are a couple details we ought to notice.

First, when comparing their last financial year which ended on December 31st, 2020, to the previous one that ended in December 2019, we can see that the revenue grew 245% to $959 million, up from $278 million. The recorded net income went positive to $7 million from negative $107 million, and so did its adjusted EBITDA, from a negative $74 million to a positive $155 million.

And this is only comparing the two years. If we have a more recent look over what happened in the first quarter that ended on March 31st, 2020, compared to that of the previous year, the total revenue grew 309% to $522 million, the adjusted EBITDA was $115 instead of the previous net loss of $53 million. Regarding the net loss, we could easily by impressed by the net loss of $1.4 billion, but we should not forget that it included a $1.5 billion fair value adjustment of convertible notes and warrants liability.

In other terms, the company is not only growing, but becoming financially viable. However, even with these promising numbers, there are also risks coming along.

The first one is that cryptocurrency represents a significant amount of Robinhood’s trading volume. 17% of the entire volume is coming from cryptocurrencies in Q1 2021, up 4% from Q1 2020. Any change of regulations on this new asset class might potentially heavily impact the company’s activity.

Additionally, one must not discard the “meme stocks” frenzy that shook markets recently like GameStop and AMC. Many smaller US stocks soared to record highs when retail investor joined forces to make prices go up. At some point, Robinhood halted the trading on two of these two mentioned companies as well as a couple others, to make sure they had enough funds to cover the regulatory requirements of their trader’s activities. The broker was heavily criticized after the move, accused of neglecting their customer’s need and helping investors instead – Citadel, a major stakeholder in Robinhood, was indeed shorting most of these stocks.

It is also not entirely certain that the company will manage to keep growing in the absence of a stay-at-home situation, fueled by freely given stimulus checks and a social media buzz that pushed up the platform’s popularity. 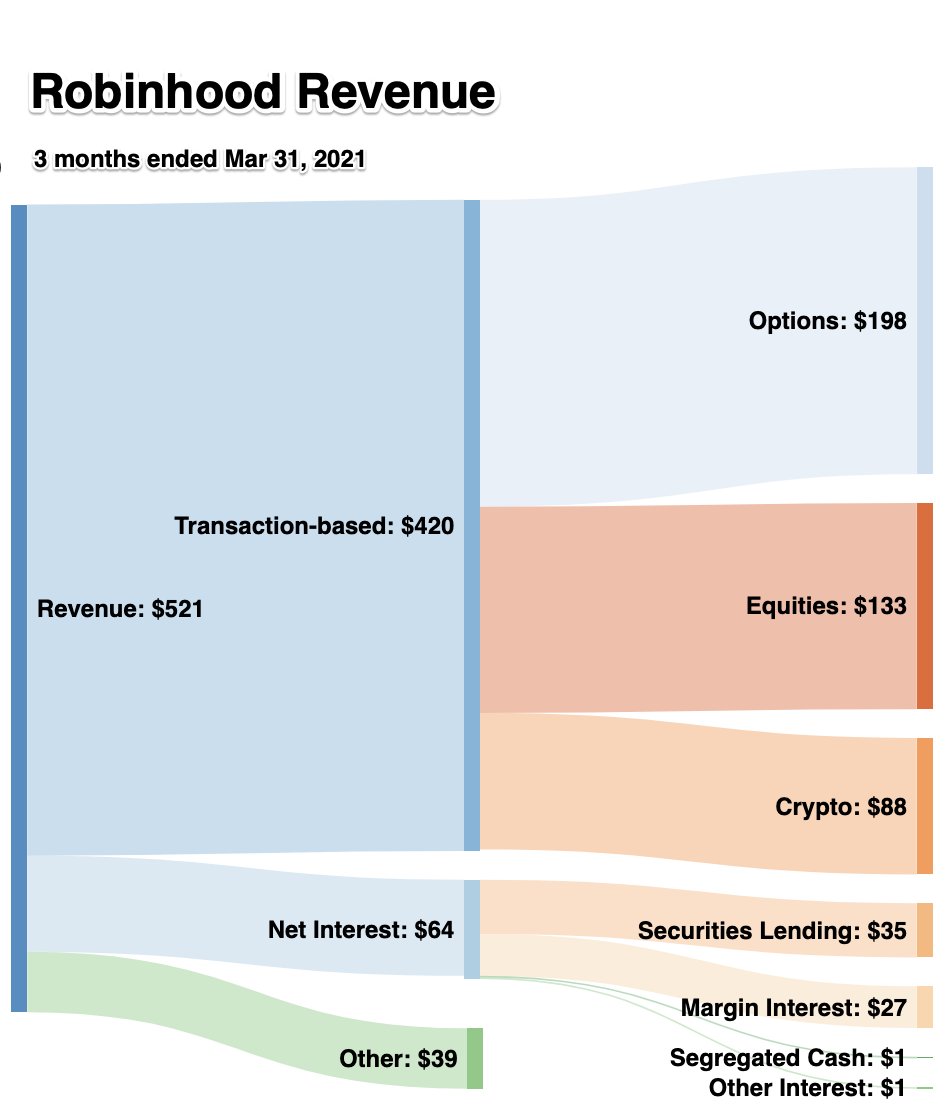 Following the scandals of AMC and GameStop, two stocks that soared and went back down again, the SEC has started to investigate a decade old practice in US markets: payments order flow.

Payments for order flow is the practice in which high-speed trading firms pay brokerages for the right to execute orders submitted by individual investors. While it may seem like a decent speed solution, it also drew a lot of criticism.

Critics say that these high frequency trading firms are not just market-making these retail orders but in fact front-running them, leaving the customers of brokerages like Robinhood not getting the best available market execution. That price slippage is a hidden cost, which detracts from the concept of zero commissions. If the hedge funds are Robinhood’s actual customers because they are the ones who pay, then naturally Robinhood might want to prioritize them over the investors who hold Robinhood accounts.

On the other hand, supporters say that it is the best way to get orders through as quickly as possible, with the best prices possible.

Companies like Citadel make money from selling the shares at a slightly higher price than they bought them – but quicker. This profit source let zero-commission trading become a norm in the US since 2019.

The SEC has reviewed the practice many times since the 1990s and keeps condoning the practice and asking brokers to be more transparent on the order routes and the amounts paid. Last December, Robinhood had to pay a $65 million fine to settle SEC allegations that they misled customers, without admitting any wrongdoings, though. 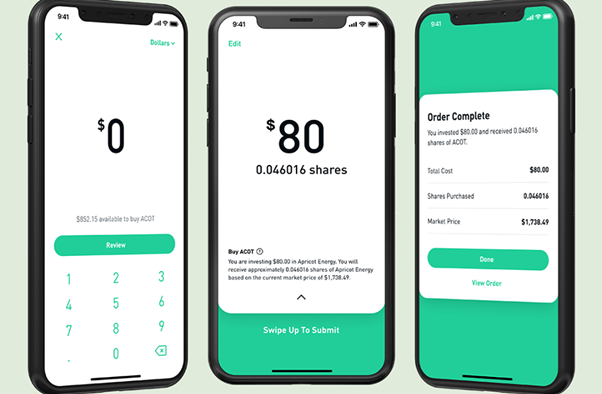 Robinhood is a controversial company. On the one hand, it empowered millions of retail investors, democratized investing and can show rather solid financial fundamentals. On the other hand, however, it is not certain that the company will be able to maintain their growth, and new SEC regulations could heavily compromise their commission-free offering.