Capital expenditure bonanza on the horizon

In 2021, real investment worldwide will be a fifth higher than before the recession. By 2022, half the firms in the S&P 500 are expecting to increase capital expenditure by a tenth. Consumers have spending money, and the pandemic has initiated major structural shifts—is there a red-hot capex cycle ahead?

First of all, what is CAPEX?

Capex is a type of investment done by both private companies and governments. When a company like Apple built the infinity loop office in Cupertino, it noted a large increase in its PP&E line on the balance sheet (more capex!). As for the government, it will take taxpayer money, find contractors, and pay them to build things like highways. 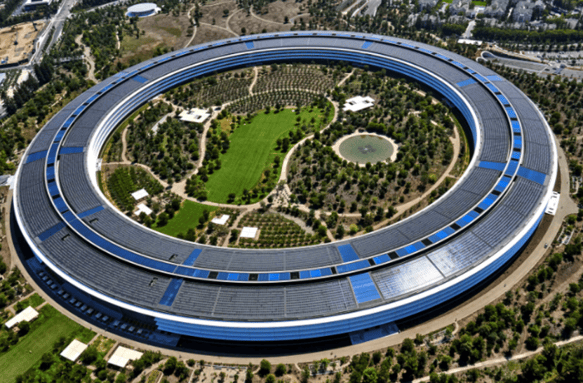 The Financial Times points to four big movements that are stirring capex. There is a shift towards infrastructure, there is an increased effort in ‘’reshoring’’, a quickly developing climate-transition technology space, and a need to secure geopolitical leadership.

Reshoring is a way to seize back supply chain independence—the pandemic proved to firms that the tradeoff between cost savings, and independence needed re-calibration. The solution? Invest at home, keep your inputs close at hand.

Next, the US government needs to address two things: number one is cyber and national security, and number two is an ageing infrastructure problem. Therefore, it plans on investing in its heavy industry, which could further boost a commodity cycle, and American security sectors.

Lastly, climate-transition technologies and the broader push for electrification and clean energies and facilities will translate into a continued commodity push, more cutting-edge tech, and better agricultural solutions. Capital-heavy industries will be some of the central beneficiaries of such projects and this is the same in China, and Europe as efforts are being made in aviation and EV.

Morgan Stanley predicts a sizzling outlook for global investments, investments that could soar 121% from pre-recession levels by the end of 2022. S&P 500 companies are bullish on spending, and capex is generally sought after in what could yield a 10% rise in capex, on average.

Apple plans to invest $430B in capex over a five-year period, AT&T will throw $24B a year at its networks, Sony is deploying $18B into expansion efforts, and in Taiwan, TSMC will invest $100B over the next three years in manufacturing. The list goes on with Samsung, and other large players plotting world domination (or more accurately, consolidation).

The pandemic has created a fundamental and potentially permanent structural demand shift, with digital tech at the center. This is further supported by recent research from Stanford showing a large increase in the proportion of patent filings for work-from-home technologies.

The first quarter saw large retail companies—Target, and Walmart—increase their capex by 36% on the back of a surge in consumer discretionary spending. Savings accounts have been bolstered by the stimulus package in the US, and more spending is a reason to increase your capex and meet demand in full.

Take Peloton as an example. It saw wild demand and was cornered into capex to expand capacity—perhaps Peloton will copy Amazon and charter its own shipping company? There are consequences to surging household spending however which can also be actionable—think maritime shipping.

The result from a soaring retail-led demand is massive supply constraint pressures, illustrated more broadly in our article on the maritime shipping space.

Goods being shipped out by exports are rising such that container capacity is not enough to meet their demand (results in rates rising too). Maersk is seeing their order-book backlogged by exporters, a growth in orders from 7% in October to 15% today. This is good for shipping operators’ bottom lines. This need to meet container demand, in conjunction with revenues rising, suggests Maersk will increase capex (i.e. buy more containers). More containers means that on aggregate, there is less ship traffic at ports, thus a de-congestion effort ahead, thus more commerce.

But not all capex is hot

It is fair to ask whether or not the current capex excitement is flimsy and short-lived. In fact, not every player is buying in, according to the Economist. About half of the S&P 500 companies are not expected to invest more than they did before the pandemic, and in fact capex was not exactly a hot topic in the past few years. The following graph illustrates the contrast in capex between technology and commodity capex in other words, not all can or are playing capex.

Global oil-and-gas firms are cutting back their traditional capex by 10% this year--perhaps as a response to climate goals pressures, or probably as they assess capital projects in renewable energies.

Airlines are skittish on spending during what continues to be an unfriendly period and, raw-materials, mining and industrials seem to be cautious about shelling out in order to relieve supply bottlenecks in commodity markets.

Additionally, inflation could be negative for private firms. When an economy experiences inflation, the cost to borrow money increases in the shape of higher interest rates. This increases a company’s cost of capital, and makes capex more expensive to fund. In a high inflation environment, uncertainty also increases, so it becomes harder for firms to forecast costs, inventory, supply chains, and wages. We will see if inflation is transitory or not, but be weary.

Taxation is also worth consideration. According to Bank of America, the estimated earnings impact from a Biden tax plan is significant on capex trigger happy firms (i.e. tech). Sectors planning on increasing their capex will be met with taxes that could slow down their EPS growth figures despite the benefits capex provides. Falling EPS growth results in falling share prices, at least on paper, which could trigger sell notifications from equity research analysts. 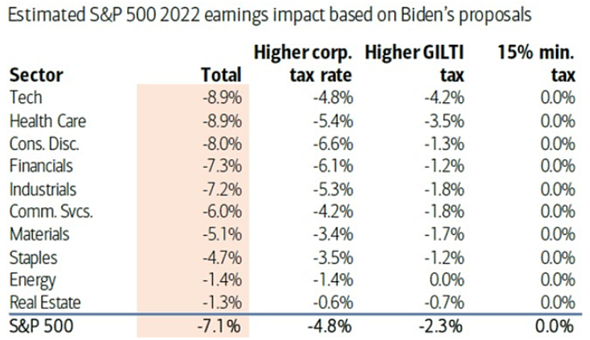 The macro backdrop looks like this: a reopening, money in spenders’ pockets, reshoring, inflation and climate-friendly policy efforts. Analysts warn that a growth in capex is probably something far ahead due to structural lags, something that takes time to figure in markets, and thus one’s portfolio.

With covid-led lockdowns and the like, company’s main objective was to stay liquid and solvent rather than grow. But now we anticipate a corporate shift in capex growth, especially on the tech side, but also consumer retail, utilities, and energy (green ones).

Firms that have been starved of capital in the past decades could switch from dividend payouts and share buybacks, and rise their EPS via capex strategies instead. Biden’s infrastructure deal and the push for green technology efforts could create new money, and correlate to an inflow of capital for years to come.

Lastly, the collapse in commodity capex is a collapse that sows the seed for a bull market in commodity prices—supply remains fixed while demand keeps on rising.

While this post-recession period is different from the previous one, we are witnessing, on the technology side mainly, a sort of rise akin to the dot com era. In some ways, this further adds fuel to the value vs. growth debate, but more on that in another blog...

How to play capex: sectors

Big TechnologyEspecially those in the chip and manufacturing space are planning on seeing a rising capex budget. The US Senate passed a bill to increase R&D and tech manufacturing investments. Apple, Samsung, Intel, TSMC.

Utilities in the USThey could benefit from an infrastructure deal set up by Biden. AT&T, WTRG, NRG Energy, Clearway Energy, Sunnova Energy.

Multi-industrial sectorEnergy has had capex forecasts revised upwards but this sector is more nuanced on the capex front. Different brokerages take different positions.

BoA thinks outlooks on the energy sector have improved in Q1, but that companies remain cautious on long-cycle, capital-intensive projects.

Large retailers will be looking to restock, and revamp stores as spending sprees ramp up. Walmart and Target as examples.

Capex forecasts have been revised upwards at BoA