Covid is a chance for pharma to gain our confidence back

Big pharma has been unloved in the last decade, both for safety and money reasons. However, these are heady times for the industry, both from the financial gains to be made from the covid vaccine and the marketing and PR value of having developed them.

Key takeaways about the perception on the pharma industry

What we thought of pharma before the pandemic

Before the global pandemic, big pharma companies were no friends of the public. The Medicare scandal, taking advantage of the elderly; poorly tested drugs that did more damage than good; the Martin Shrekli scandal, who raised an HIV treatment from $13.50 a pill to $750 (5,500% increase): these were all reasons for the public to despise big pharma. 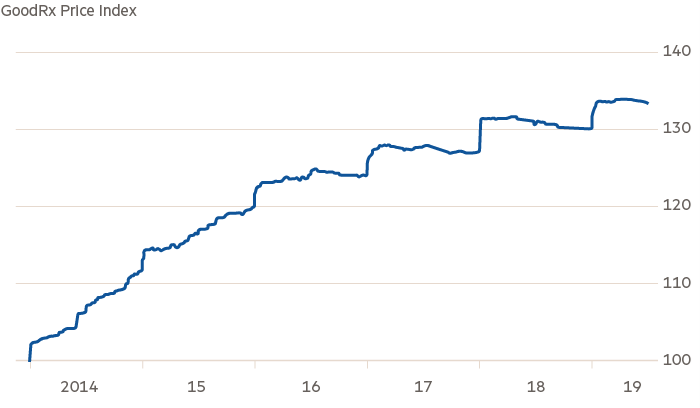 We have seen the example of Novartis winning approval for a drug treating spinal muscular atrophy at the mere cost of $2.1 million – affordable? And this did not only concern new, ground-breaking treatments: older drugs were also constantly seeing prices rise.

A 2019 study showed that 58% of US citizens viewed pharma negatively, and 27% positively. The drug-making industry was also the least well-regarded segment of the business.

Patients felt even more abused as they had no choice but to accept what was: after all, who else is going to treat your health issue?

Our idea of pharma has generally been going downhill in the last 2 decades (Source: Gallup Study)

Saving lives during the pandemic

It seems that today, tables have turned. Pharma companies have rarely been blessed with such good business and public image. The contribution of Pfizer and AstraZeneca in the vaccine development and production has showcased them as the saviors of our system.

Robert Jekielek, managing director of the Harris Poll, a study that measures the share of the US public with a positive image of the pharmaceutical sector, saw that this rate doubled from 32% in January 2020 to 62% today. In the UK, 56% of those polled said that their view of big pharma improved during the pandemic. 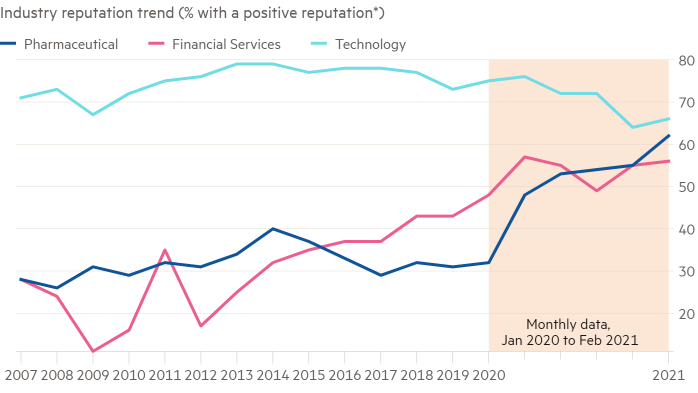 The perception of companies full of money hungry businessmen has transformed into almost humanistic organizations full of selfless scientists working hard to save the world.

They even proved to be more cautious than some countries wanted them to be. Although many governments wanted to allow the distribution of not yet fully-tested products, nine of the biggest companies – namely, AstraZeneca, BioNTech, GlaxoSmithKline, Johnson & Johnson, Merck, Moderna, Inc., Novavax, Inc., Pfizer Inc., and Sanofi – all agreed not to do so, and to perform strict clinical trials before distribution. Of course, they knew that releasing low-quality solutions would one day hurt their image, but still, it was a prudent and positive move.

Some companies even went further to improve their public relations. Pfizer paid National Geographic to come in their labs to follow the vaccine development process, and Johnson and Johnson’s video series on the same subject gathered 90 million views in 100 countries.

However, the recent decision to put on hold the rollout of the AstraZeneca vaccine in multiple European countries is proof of how fragile public trust can be. At least 16 European countries have suspended or limited the use of the jab. Some experts fear the appearance of blood clots after the jab, although the link is yet to be proven.

AstraZeneca insists on the fact that there is no evidence that these blood clots are caused by their vaccine. The statement was supported by the European drug regulators, which argued that the positive outcomes from the shot outweighed the risks. Side effects are of course frightening: after all, they may cause healthy individuals to become sick.

A major risk in the case that more side effects were to appear, is more scrutiny from regulators, which would induce higher costs, in turn damaging the reputation of big pharma.

Although Astra and Johnson & Johnson promised that they did not profit from their vaccine operations – after all, it would be unfair as they received financial help from governments – Pfizer did report the sale of $15 billion worth of shots this year, with a profit margin in the “high 20s”. And even if they promised not to distribute vaccines based on the highest bidder, rollouts in poorer countries have remained painfully slow. Don’t mess this up, it’s your chance to shine, pharma.

A once-in-a-lifetime opportunity for pharma to be loved again?

In the end, drug companies will need to be careful not to prioritize the highest bidders, as this would just throw them back where they were: in the sea of money hungry sharks. Many US regulators insist that we must carefully follow up the pricing process, as Big Pharma have showed in the past that their interest could often come before patients.

It is a crucial moment: in a pandemic the public is, for once, listening, watching, and reading. We have never paid so much attention to pharma before, as many companies are now working towards a solution which concerns us all. This is a massive opportunity for big pharma to communicate, and if necessary, redefine what they stand for.

Of course, our expectation of a quality and timely solution also has a very risky impact. On the one side, they could succeed in deploying functioning vaccines and all would be well. But on the other hand, this expectation also has a big potential for disappointment if failures arise.

In the end, big pharma should take advantage of this once-in-a-lifetime opportunity to communicate with its public and educate it to understand their goals, mission, and methods. Only by emphasizing their importance and communicating better will they potentially repair their reputation.

In the end, once covid vaccines are all distributed, pharma will have the opportunity to say: “We were there. We got the world rolling again.” While this would make great marketing, others doubt that love will stay, and think more of a halt of hostilities before the next scandals. What will it be? Are big pharma too deep in the reputational deficit?

Despite having a bad press sometimes, most pharma stocks still show a great share price performance over the last decade. Most are close to record highs, which suggest that, on absolute basis, low opinion polls do not not have an outstanding effect on their financials. What we could wonder, though, is what would happen if they managed to combine a profitable business model as well as a good public opinion.