The steep drop in the euro has come back into focus this week with EURUSD plunging to fresh 2022 lows, now down over 11% on the year. However, perhaps the most notable development is EURCHF holding below parity for the first time since the currency peg was removed in 2015.

While the pair tested below parity earlier in the year, the move was quickly rebuffed. However, with EUR sinking across the board, the move looks likely to hold this time and given the general backdrop traders are now asking whether EURUSD will be the next pair to sink below parity or whether EUR is likely to reverse in the near-term?

In order to assess this, let’s take a look at what has been driving price action this year and how these factors are likely to develop going forward.

What has been driving EURUSD and EURCHF this year?

Over much of the first half of the year, EUR was driven lower as a result of the monetary policy divergence between the ECB and Fed, as well as other hawkish central banks within the G10. With the ECB battling the fallout from the Ukraine war the eurozone economy was thought to be too fragile to withstand any tightening and the ECB reaffirmed its commitment to maintaining an easing presence in the market.

On the other hand, the Fed was turning aggressively more hawkish. Following the initial Q1 rate-hike, the Fed began quickly upgrading its rate projections and with each meeting since March has turned more and more hawkish. In June the Fed announced a 75bps hike, its largest hike since the early 90s and traders are now forecasting a similar move to come this month.

Into Q2, however, there was an important shift. The ECB was no longer able to ignore spiralling inflation nor could they any longer categorise the rise as transitory. With price soaring across the eurozone, the ECB began to lay the groundwork for the first rate-hike in over a decade, due this month.

However, the sudden shift at the ECB was not the only major surprise on the central bank front this month. The SNB front-ran the ECB’s July hike with an unexpected 50bps hike in June.

In the face of slower than elsewhere but quickly-expanding Swiss inflation, the SNB announced the move and signalled the likelihood of further hikes to come this year as it too battles inflation. Notably, the SNB was even seen refraining from its usual comments around the strength of the Franc. With Switzerland losing its status as having the lowest interest rates globally, CHF saw a seismic shift in price action, reflected in the swift drop below parity in EURCHF.

Given the Fed’s own aggressively hawkish projections and the more vulnerable nature of the eurozone economy with regards to the ongoing conflict in Ukraine, the risks look skewed towards further downside.

The ECB’s shift in tone was largely upstaged by more aggressive action from the Fed in June and with further such action expected this month and across the remainder of the year, it seems hard to think the ECB will be able to play catch-up, especially given the more idiosyncratic risks the eurozone faces.

Indeed, the ECB’s planned monetary policy normalisation is adding to growth fears in the eurozone, heightening the risk of recession there, which will no doubt create a further drag on EUR. Both USD and CHF stand to benefit, not just from central bank hawkishness, but also from increases safe-haven demand amidst any further market volatility this year.

It’s important to highlight the risks to this outlook. Given the level of built-up hawkish Fed expectations, any shift in this narrative will no doubt weigh on USD. If the Fed is seen pausing rate hikes or greatly reducing the pace of hikes over the remainder of the year, this might allow EURUSD to recover. Similarly, if recessionary risks die down and safe-haven demand fades, EURCHF might find similar room to recover.

The breakdown below the 1.0350 support level formed by 2016 and 2022 lows is a major bearish development. While price holds below this level the outlook is for the pair to continue lower toward parity and perhaps to record lows. Bulls need to see a break back above 1.0800 to negate this view. 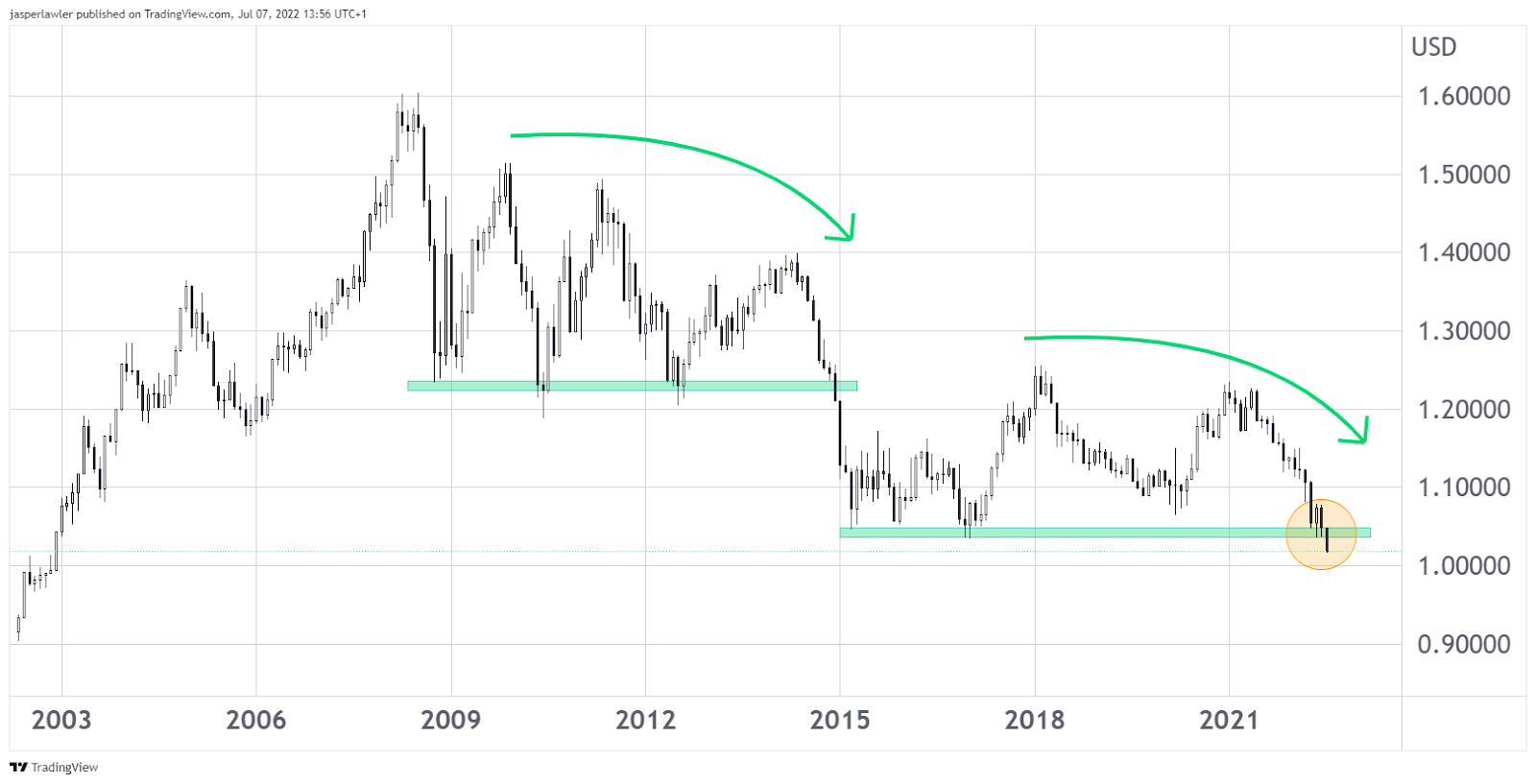 EURCHF has been grinding lower within a well-defined bear channel over the last few years. Recently, we’ve seen price blowing through key supports including the 1.0100 level. While below here, the outlook is focused on a test of the .9780 level next and the channel low.