Fade the USD now the Fed has hiked?

Dollar bulls have had a good six months in preparation for the first Fed rate hike. But now it’s happened, US rates are higher with promises to go much higher - will the next six months be as good?

The Fed playing catch up

Once again markets have shown better predictive power than economists. While Jerome Powell and the Federal Reserve were predicting ‘transitory’ inflation – the US dollar gained ground as markets priced in rate hikes in response to more permanent inflation.

Gains for the dollar accelerated as the Fed pivoted in Q4. Following a strong US economic rebound last year, the steep uptick in inflation across the backend of the year, and the fading omicron risks into the start of 2022, the market has been bracing itself for the Fed to begin normalising policy.

Now the Fed has caught up. In the March meeting, the Fed raised rates for the first time since 2018 and has signalled a rate hike at every remaining meeting in 2022 with scope for double (50-basis point) hikes if needed.

USD higher ahead of the hike

Looking at USD price action over the final months of last year, these expectations were well reflected with the Dollar Index rallying 4% off Q4 2021 lows. This rally then extended further over Q1 with the index rallying another 5% off the January lows as traders anticipated tightening action from the Fed.

However, following the Fed’s March 18th rate hike, the first since 2018, lacklustre action in the dollar has left investors pondering a market axiom which states that the dollar typically tends to weaken following the first hike of the cycle.

How true is that likely to be this time around? And what are the factors likely to impact the dollar as we move forward here?

In explaining this, we can also employ another favourite market adage: “buy the rumour, sell the news”. Essentially, the expectation that the Fed is set to embark on a tightening program leads the market to buy USD, hence the run-up ahead of the rate announcement.

Typically, by the time the Fed moves on rates, USD upside exposure is well-extended, and traders that were early into the long-USD trade use the announcement to liquidate their positions, causing some pullback in USD.

COT data from the CFTC shows hedge funds at their most bullish on the USD since 2019. The market can get more bullish from here but some profit-taking is to be expected coinciding with the first rate hike.

Looking back at data over the last twenty years, this dynamic tends to play out on average, with the USD weakening against G10 FX over a 1 to 3-month period.

However, it is worth noting that this weaker USD movement is “on average”, meaning that not all cycles saw the same movement and the movement varies heavily from currency to currency. In short, while such market sayings can act as a guide, it is important to remember that every market event is unique, and we must always consider idiosyncratic factors.

How affect will the Ukraine crisis on the USD?

Looking for differentiating factors facing the dollar and its reaction function to the Fed this time around, the main issue to note is the war in Ukraine. We can look at this through the lens of inflation and growth.

Russia’s invasion of Ukraine has exacerbated inflationary pressures. From this one can deduce that it is more difficult for markets to price in future Fed policy because the situation around Ukraine is so fluid.

For example, the assumption is that the EU will not impose a Russian oil embargo – but if they did – it would have huge implications for inflation – especially in Europe – and likely accelerate rate hike plans from the ECB as well as the Fed.

Equally, shock turns of events in Ukraine could create a recession. Legendary investor Carl Icahn warned of a US recession "or worse" in the past week – and Europe is much more economically exposed to the war.

The Fed is dealing with rampant inflation and just this week we heard Fed chairman Powell warn that the Fed stands ready to tighten ahead of schedule, if necessary, in order to combat spiralling prices. 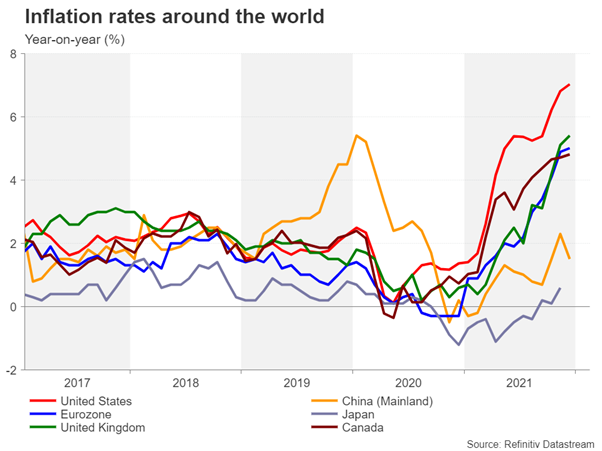 USD is rising strongly against JPY as the yen falls back on better risk appetite as well as Fed / BOJ policy divergence. While still seemingly premature, the market has already started to price in a Russia-Ukraine ceasefire. This dynamic has seen risk assets rebounding off the post-invasion lows, with JPY weakening on reduced safe haven inflows.

In terms of where the USD might underperform, we can look to EURUSD. Ahead of the outbreak of violence in Ukraine, EUR had been higher in response to an unexpectedly hawkish shift from the ECB.

If a ceasefire or, better yet, a more permanent end to the violence, can be agreed between Russia and Ukraine, this is likely to allow market focus to gradually move back to ECB policy normalisation. Given how subdued EURUSD has been, such a development could fuel a sharp shift in sentiment allowing EURUSD to trade higher as the ECB plays catch up with the Fed.

And now for something completely different…

The dollar trade-weighted index is arguably over 5 years into a bullish trend that tends to last around 6 ½ years. In the last two cycles, it was the last year that saw the most dramatic gains but the peak of the last bull trend in 2002 was lower than the previous peak in 1985, implying the next peak could be even lower. 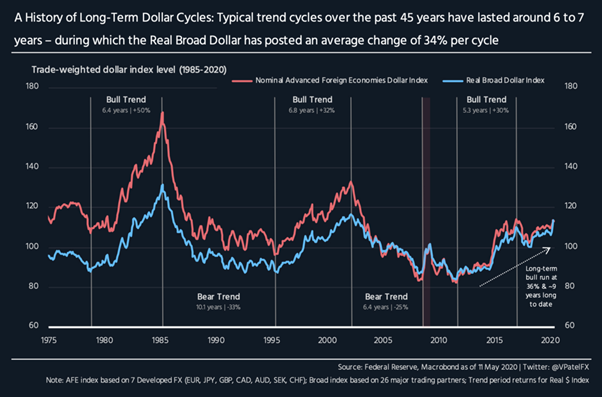