Investing in the water thematic: Sink or Swim?

Pavan Sukhdev, a leading environmental economists said, ‘’We use nature because it is valuable—but we lose it because it is free’’. Investing in water projects and monetizing the commodity is difficult because valuing water is subject to debate—nevertheless, water stocks are worth studying as an investment.

The earth’s surface is 71% water. Of that figure, 96.54% is ocean, sea and bay water. Of the freshwater we have, 68.7% of it is locked up in ice caps, glaciers, and permanent snow form. 30.1% is groundwater and the remainder is split between lakes, the atmosphere and the soil.

The following graphic from Igor Shiklomanov’s 1993, Water in Crisis Guide shows from left to right, how water is split between saline and fresh, how much freshwater exists and how surface water is broken down. 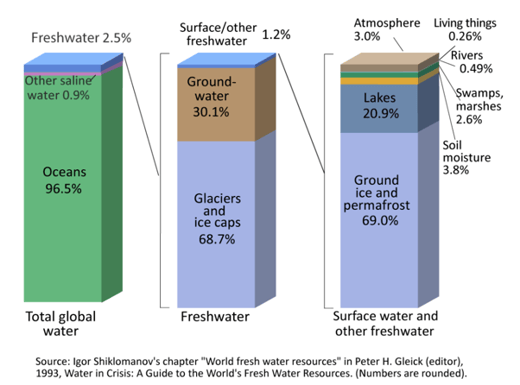 Water stress, the measure of water use as a function of available supply, indicates just how rare water, and water access is to many people around the world. According to reports by UNESCO and the UN, to this day two billion people experience a serious level of water stress. Factoring in for seasonality reports show that four billion people suffer from severe water scarcity for at least one month per year (statistics from 2016).

Volatility in water access seasonality is linked to a changing climate, and poor infrastructure holds back those who have water but no means to access it. While there is lots of water on earth, accessing it is a challenge in many countries still, and a lack of infrastructure is the driving force behind a northward ride in value and cost.

UNESCO says, ‘’unlike most other natural resources, it has proven extremely difficult to determine water’s ‘true’ value.’’. The reason for this is that water, unlike diamonds, holds a significantly broader existential position in people’s lives—water valuation is complex because there is not only a transactional component to it, but a cultural and religious dimension to it.

These unique characteristics make it difficult to value water using a typical economic framework like market prices. Furthermore, water is bulky, hard to move around quickly, the commodity is heavily subsidized, and it is usually controlled by monopolies. Furthermore, we tend to assimilate the term value with ‘good’, but contaminated waters represents a negative value—something to also consider.

Different valuation methods which put different priorities on water usage, yield different results. The WHO, and UNESCO state that the values derived are not necessarily those that drive investment. In fact, ‘’the value of domestic water supply is generally perceived by households to be higher than that of sanitation and especially wastewater treatment, but investments in sanitation deliver about twice the return on investment in drinking water supply’’.

There are several methods used to value water; finding the residual value i.e. deriving a value from the cost of capital and looking at the difference between infrastructural cost and output. There’s also mathematical programming models i.e. a constraint oriented, marginal value computing model used to determine relative values of water depending on different economic and trade environments. Lastly, other models include, replacement cost, contingent valuation and demand functions.

Water as an investment

There is a lot of business to be made in the treatment of water. Wastewater treatment plants are now reaching an internal energy self-sufficiency which means there are good opportunities of intensifying energy recovery from wastewater. Such treatment facilities have the potential to produce surplus energy and investments in energy efficiency and recovery activities have the potential to raise the levels of returns on investment.

It should come as no surprise that desalinating water is a widely spread practice. Currently, more than 174 countries use desalination to meet sector water demand and supplying over 300 million people with potable water as of 2020. Most desalination facilities are in high-income countries but a declining cost of operation is a good sign for further investments to come.

As of last year, there were 16,000 operational plants, a daily production of 95 million m3 and over 50% of the desalination capacity is held in Middle East. The image below shows al-Jubail, the world’s largest plant making 1.4 million cubic meters of fresh water daily. 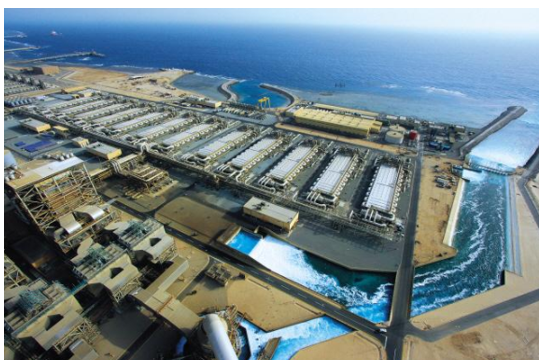 But UNESCO also points out some of the difficulties behind water project financing stating that about $75B per annum is lost to corruption. This is hugely disappointing considering that access to water is directly linked to life expectancy. For example, at the global level, 11% of maternal deaths (mainly in low to middle income nations) are cause by infections related to poor sanitation (lack of clean water access) during operations.

The desalination market is projected to grow at 9.5% each year and reach a $32B market size by 2025. As investors re-orient their portfolios towards ESG options, water-related stocks become even more interesting. French firm Veolio is a water management firm who sees 45% of its revenues coming from desalination plants. They are accompanied by AquaVenture Holdings whose desalination operations and other water purification techniques in a water-as-a-service (WaaS) model caters to a large US market. Saudi Arabian companies and government remains the most active player in this space. Of course, there are other firms listed below who are players in the desalination business.

Water management and treatment stocks showed below, are but a few of the already existing players listed further down that are important to be aware of. Looking at utilities, which should benefit from a cyclical reopening trade, American Water Works (AWK)’ status as the industry’s largest and most geographically spread business, gives it some unique comparative advantages in M&A and growth. The U.S. water utility industry is split in multiple municipalities owning their own systems. Like many industries we see today, we expect more consolidation to come, something that would benefit AWK.

Water bottle market, should see revenues of $306,444M this year. It shows further promise with a 6.38% CAGR between now and 2025. Most of this revenue is generated in the US where the population drinks more water out of bottles than anywhere else in the world i.e. on average Americans will spend $40 on bottled water a year.

A note on the below figures; selected companies all showcase a relatively high debt to equity ratio, which means they are leveraged companies (they finance their operations via a lot of debt) which could entail being reliant on their creditors, and slightly riskier in the case of downward cycle (which we don't expect as we exit the pandemic). Since these firms are involved in a capital intensive industry however, it makes sense to see high leverage.