The recent surge in Bitcoin – what does it mean?

In the last couple of weeks, Bitcoin has been steadily rising in price, with the token at one point briefly moving above USD25'000, its highest over the past two months and up over 40% from its June lows. This begs the question: have we seen the bottom of this downward trend?

Many think so, but there are also a few pessimists who believe this is just another bear market rally. Here is everything you need to know about the latest Bitcoin price update.

Bitcoin is red hot again. After a first half of the year in which the price crashed by more than half, the digital coin is suddenly flying high again. Prices have soared above USD25’000 after bottoming out at around USD17’600 in mid-June. In other words: It’s been a volatile month for Bitcoin bulls. Crypto enthusiasts who had been watching the market stumble for months finally got some good news these recent weeks.

A report on the US Consumer Price Index (CPI) published in July was much-welcomed news to crypto investors, sending higher the whole crypto universe minutes after the release. The US Commerce Department published the July inflation reading, which showed prices declining at a slightly lower rate than most analysts expected. Markets were feeling more hopeful the US Federal Reserve was succeeding in its attempt to tame inflation without casting the economy into recession and could raise interest rates at a more moderate rate at its next meeting in September.

Ether too cracked the USD2’000 mark for the first time since the end-May, increasing more than 90% over the last month. The second-largest crypto by market cap has been gaining momentum even without the CPI news. The Ethereum blockchain is nearing its much-anticipated “Merge”, which will shift the protocol from proof-of-work (PoW) to a less energy-sapping proof-of-stake (PoS) model this September.

Indications that institutional investors are preparing to invest heavily in digital assets have greatly improved sentiment lately. Perhaps, the most important is the entry of BlackRock, the largest asset manager in the world, into the cryptocurrency. The asset manager has launched a private Bitcoin trust for institutional clients in the United States. The trust will track the performance of Bitcoin, offering direct exposure to the digital currency's price.

“Despite the sharp decline in the digital asset market, we are still seeing substantial interest from some institutional clients on how to access these assets efficiently and profitably,” BlackRock said.

Another noteworthy update is the announcement from the Chicago Mercantile Exchange, the world's leading derivatives marketplace to further expand its cryptocurrency derivatives offering with the introduction of Bitcoin Euro and Ether Euro futures on August 29.

Cryptocurrencies didn’t sit idly by and pushed higher on the news, though not radically higher. This is not surprising given how closely crypto asset markets have been correlated with US equities. Nonetheless, these developments underscore how mainstream institutions, including pension funds, hedge funds, and banks, are getting into crypto assets lately, betting that the alternative asset class is here to stay

The bottom, likely behind us

With the recent surge in the value of BTC, a lot of people have started to wonder if the bottom has been reached. And while no one can be certain of that, there are a few things worth considering. Let’s start with the fact that the so-called Long-Term-Holder (LTH) capitulation is believed to have happened. Earlier in its history, Bitcoin experienced 3 periods during which LTHs decided to sell their coins below the cost of purchase (green area.) This took place during the lows of all three historical bear markets: 2012, 2015 and 2018-2019. 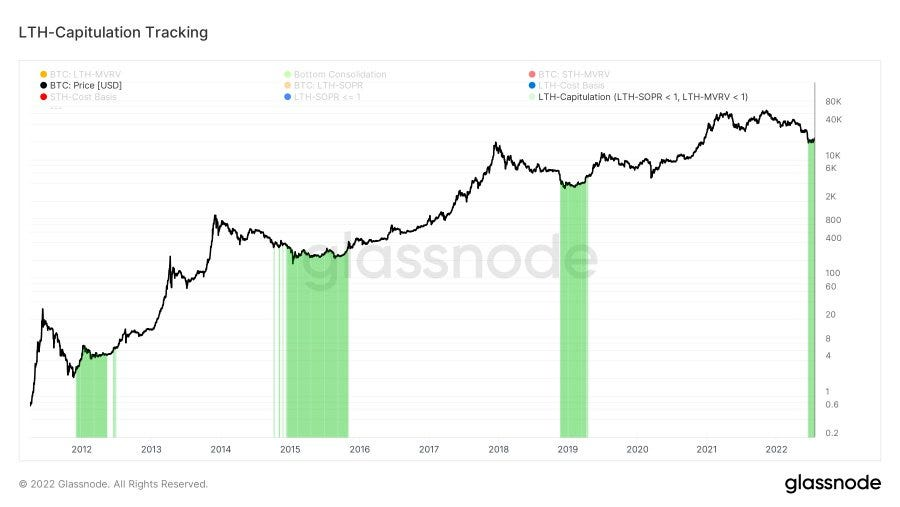 If history is any indication here, chances are that the USD18’000 area will serve as the bottom of the current bear market. In addition, the crypto market has overall declined meaningfully in value. Having a close look at the past two bear markets, BTC had suffered a total decline of roughly 80% since its peak. So far, the maximum drawdown has been close to 72%, implying the bottom is near, if not already behind.

Risk appetite boosted, but don’t get carried away

Not surprisingly, risk-assets rallied after the CPI print, while the US 10-year yield retreated, and the US dollar gauge slipped. Notwithstanding the positive data, two members of the FOMC stated right after the information that the battle against inflation has not yet been won. It is true that it is encouraging to see the most recent inflation figures coming in lower than expected, but one data point doesn't make a pattern, and so far, inflation remains very high. In addition, we had a similar surprise earlier this year, which was then followed by other rises leading to new multi-decade highs.

Bitcoin’s surge back to USD25'000 appears to have pushed more people into crypto markets, which are now cautiously optimistic that the most recent bottom has been reached. The good news is that more companies seem to be getting into the crypto game, which means that the crypto asset class is here to stay. Nevertheless, it’s important to remember that the crypto market could still be in a bear market. And it’ll take more than a couple of rallies to signal the bottom is in. That being said, the risk-reward profile is getting more attractive for long-term “hodlers”.