Bachem holding is rarely talked about, but it is one of the great performing companies in the Swiss pharma industry. Market leader in the production of peptides, they have continuously beaten earnings expectations and their stock grew 102% year to date.

Bachem Holding is a Swiss company active in the field of biochemistry, chemistry, and pharmaceutical components. They develop products and services linked to the pharmaceutical and biotechnology industry, with a specialization in the production of peptides – for which they are market leaders – and other complex organic compounds such as Active Pharmaceutical Ingredients.  Not only do they produce these elements, but they also help in the development of manufacturing processes to craft them. 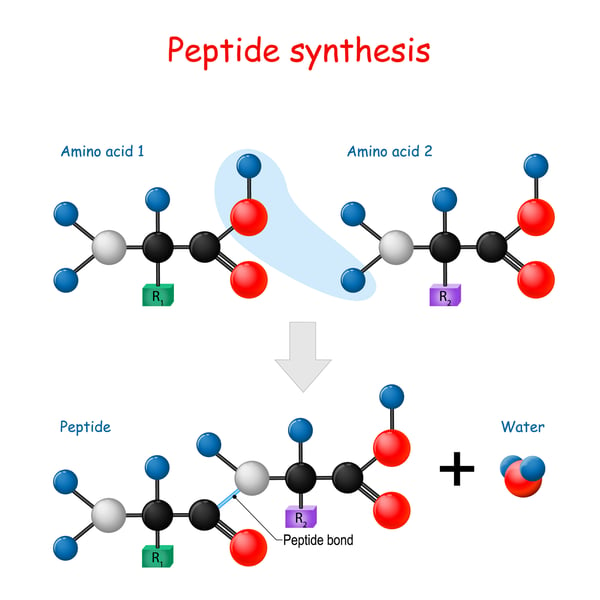 The bounding of 2 amino acids creates a peptide, which also releases a water molecule

Bachem have a continuously expanding range of new products meant to help clients in their research purposes. Additionally, they have over 5’500 different biologically active peptides, amino acid derivatives and biochemicals ready to deliver. Finally, they also offer custom synthesis for customers looking for a very specific component.

Today, they have the capacity to produce peptide APIs from gram scale up to hundreds of kilos, and other small molecules API from gram scale to tens of tons. They have facilities in Switzerland, Great Britain, USA and Japan, and over 1’200 employees as of 2019.

Bachem started in 1971, when Peter Grogg founded the company with two employees in Liestal, a small town near Basel, wanting to focus on peptide synthesis. By 1995, the facilities had expanded to over 15’600m2, counting almost 190 employees. The company then expanded outside of Europe, with the establishment of Bachem Bioscience, Inc. in Philadelphia USA, in 1987. They then kept expanding, opening different facilities throughout Europe, before going through an IPO in 1988 on the Swiss Stock exchange under the ticker “BANB”.

In 2011, after further expansions and acquisitions, Bachem celebrated its 40th anniversary, placing itself as one of the leaders of the production of research ingredients and active pharmaceutical ingredients for the pharmaceutical industry. In 2014, Bachem was the leading peptide manufacturer. In 2018, the company expanded in Japan, and started to position itself as a provider for the development and production of active agents in the field of oligonucleotides, which are short DNA or RNA molecules.

Bachem holding can proudly show a compound EPS growth rate of 17% for the last three years, which has no doubt fuelled the optimism of investors. While EBIT margins were flat over the last year, their revenues grew 16% to CHF 356 million. 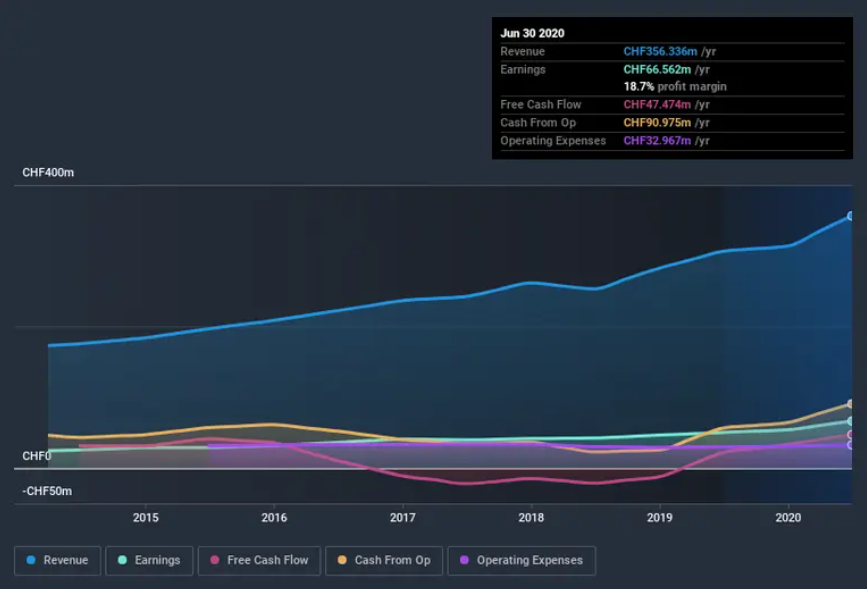 Earnings vs Revenue as of June 2020 (Source: Simply Wall Street)

A decent share of the stocks is owned by insiders, which means that the company will be managed in their interest. Insider investors currently hold 63% of the company, for a total of CHF 3.2 billion. This will likely encourage a long-term managing model. According to Simply Wall Street analysts , this makes the stock an interesting buy for growth investors, who are interested in the success of a business over the long term. The Bachem swiss stock, which is currently priced at CHF 368 at the time of writing, showed a 642% growth over the past 5 years. This can be partly explained with the above-mentioned EPS growth, but it is most likely largely due to a strong investor’s enthusiasm, as the P/E ratio is fairly high at 76.69.

These analyses are further supported by Standard & Poor’s, which classifies the stock among their best growth stock. The company keeps beating earnings expectations, which encouraged analysts to raise their expectations.

Among their weaknesses, we still have to mention a strong resistance at CHF 406, as well as the lack of dividends, making yields low or non-existent, taking aside stock valuation growth.