The Turkish lira is starting to reverse a multi-year slump after the newly-installed central bank governor just hiked interest rates to a massive 15%.

The Turkish lira is gaining ground as speculators bet that Turkey is finally taking steps to tackle the high inflation that has devalued the currency for over 6 years.

The accompanying statement made clear the intent of the central bank, saying “The tightness of monetary policy will be decisively sustained until a permanent fall in inflation is achieved.”

The new central bank governor has taken the necessary decisive step to bring runaway inflation under control. In doing so, he might have done what is necessary to stabilise the Turkish lira, which has been tumbling to record lows. Halting the decline in the lira can help avert a rapidly approaching balance of payments disaster.

Former finance minister Naci Agbal was named as the new CBRT governor last Saturday, while former deputy PM Lütfi Elvan was made finance minister. The lira had swooned to a new record low of 8.5 to the dollar after Treasury minister and Finance Minister Berat Albayrak resigned a few days earlier over health concerns.

The central bank had hiked rates by 200 basis points to 10.25% in September, which led to a welcome flip into positive territory for real interest rates. 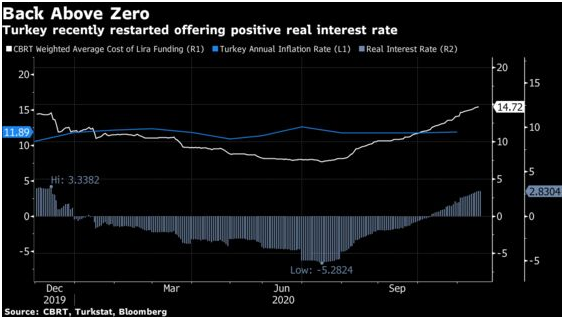 But then the CBRT held pat at the next meeting, leaving investors with a sense the central bank and the government were not serious about reforming economic policy. There was still a sense that the currency had no chance unless there was a change of government or economic reform from the current one. It appears that President Erdogan has been dragged kicking and screaming by financial markets into a more sustainable economic policy.

The Turkish economy has been recovering from a 9.9% contraction in the second quarter caused by covid-19 restrictions.

The same old cronies are in control in Turkey, led by infamous President Erdogan. Many investors lay the blame for the devaluation of the currency at the door of the President, who for years has interfered in monetary policy. The president was mockingly given his own branch of economics called ‘Erdogananomics’ after he said he will lower inflation by lowering interest rates. (Hint: it doesn't work that way!)

There is also the thorny issue of geopolitics with a top European diplomat saying soured relations between the bloc and Turkey were approaching a 'watershed moment'. 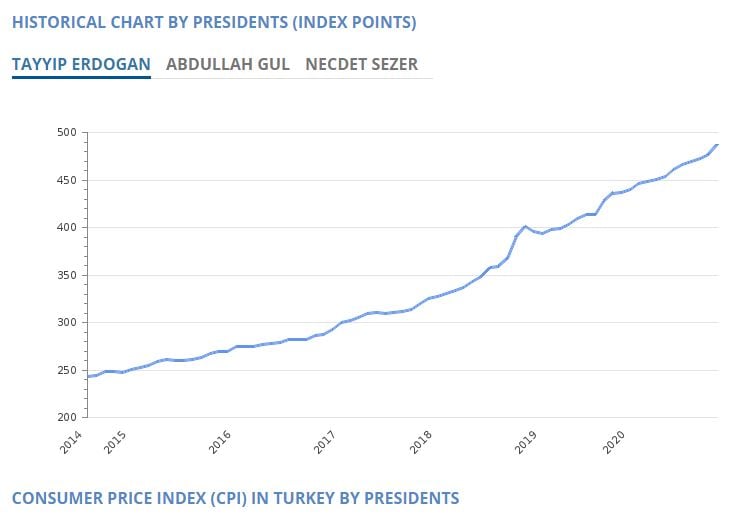 The main objective now for the central bank is to regain credibility among both investors and the Turkish public. The objective of keeping price stability has to be respected, which clearly has not been the case with consumer price inflation at 11.9% year-over-year and producer prices growing by a rapid 18.2% annually.

The bank’s ability to regain credibility will be limited by its lack of independence. The market needs to believe that the central bank will make decisions necessary for the Turkish economy, rather than for the re-election hopes of President Erdogan. Still, the next Turkish election is not until 2023 so there is time for Erdogan to take the tough medicine now and reap the rewards later.