Twitter is right to seek out new revenues streams like a subscription model for the most prolific of users. Twitter’s desire to target tester markets like Canada and Australia to launch Twitter Blue raises some flags, but a US and European implementation could generate significant revenues.

Why a subscription model now?

Subscription models are business models where customers pay regular fees, usually on a monthly or annual basis, in exchange for an increased service offering. This is a great way to further monetize a product and generate recurring revenues. A business wants this extra cash either because it sees a slowdown in sales, or as a way to stay competitive and capture more consumer surplus. For Twitter, it might answer to both sides.

Because Twitter makes most of its money through the sale of its promoted products like promoted tweets, promoted accounts and promoted trends, and because advertisers don’t have long-term written agreements they see risk in the occurrence of a shock.

While Twitter has not exactly seen a shock from the pandemic, it might just see this model implementation as a way to push for more market share, especially as TikTok, Pinterest and Snapchat continue throwing punches in the vain era of social media, streaming and vlogging. The new subscription model is called ‘’Twitter Blue’’. The company’s first subscription service is designed to diversify away from ads and licensing revenue streams which are the bulk of income.

Interestingly, the Twitter Blue roll out will start with users in Canada and Australia as opposed to America. Looking at the latest 10-Q, we can see why this makes sense. There’s still room for improvement in their abroad sales! Twitter could be aiming for a 50% earnings stream coming from
abroad because it reduces risk and increased exposure to other growth markets.

The service is rolling out in Canada and Australia for CAD$3.49 and AUD$4.49 a month, and no plans have been announced yet around US users. This subscription model is part of Twitter’s ploy to attract a total of 315 million monetizable daily active users by the end of 2023, something that would see annual revenues double to $7.5 billion.

Twitter Blue users will get access to certain unique privileges like an ‘’Undo’’ tweet feature, a self-explanatory 30 second tweet deletion tool for the most prolific of tweeters. Other unique tools will include, bookmark folders so users can organize their saved tweets, a reader mode to facilitate reading long threads, the option to pimp the Twitter app icon on phones, a new user interface with customizable colors and lastly, a newly dedicated customer support team. 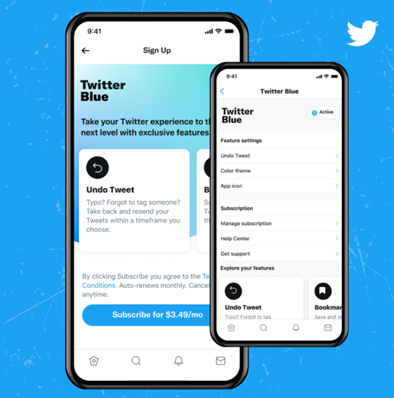 Twitter Blue would target the platform’s most prolific tweeters, which according to Pew Research could represent about 10% of the 199 million users say 20 million users. Assuming a conversion rate of roughly 50% of those users (10 million users), and taking the US dollar monthly fee equivalent of $3.00 per month, Twitter’s looking at 12 months at $3.00 making $36.00 per year, or $360 million in added cashflow per annum. This is equivalent to a 5%-10% facelift on 2021 YTD revenues…

Of course, this is an assumption going off the entire user base whereas Twitter Blue will be launched in tester markets first. Canada’s 7.6 million user base in 2021 would be equivalent to a generous revenue of 10% of 7.6 million at $36 a year therefore, a timid $27 million added cashflow.

While casual users may not easily convert to full-on subscribers, they may be curious to try out the new features, which for such a small fee is not improbable. However, it makes more sense to expect influencers and accounts with loads of followers to be the main target users here. 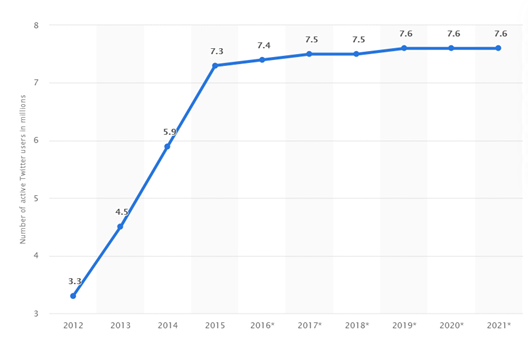 Twitter reported its first quarter earnings for 2021 at the end of April noting a 20% year over year growth in monetizable daily active users. They now have 199 million daily active users which they monetize through their advertisement business model. Advertisers continue to see benefits from updated ad formats and improved measurements offered by Twitter’s technology. This technology has enabled Twitter to sustain advertiser interest and led to a 32% year over year growth in ad revenue for Q1.

While the Twitter Blue launch should not make too large a dent in cash flow estimates, the company’s product development cadence has risen and offers a nice peek into multiple new ways the tech firm could create new revenue streams going into Q2. Twitter’s H2 outlook shows some good momentum in mobile app promotion traction from the expected Olympics event, a new product roadmap, and its price to sales ratio coming in at a relative discount to competitors Snapchat and Pinterest.

Downsides include; political bans on the use of Twitter in other countries (banned in Nigeria as of today), pressure of usage as new competing services enter the market, potentially declining margins due to the need for investments in security, and a P/E ratio that is subject to significant compression if revenue growth loses pace due to a market squeeze coming from alternative products stealing away usership.