Could the slowdown in China create yuan volatility?

Forex market volatility is picking up, but one place it hasn’t is in the Chinese yuan. Could the recent PBOC rate cuts, impending Fed rate hike and slowing Chinese economy change that?

How has the USD/CNY been trading?

USD/CNY has been trending lower since late July forming a series of lower highs and lower lows. The price has fallen from 6.53 to 6.36 in late October and trades below the multi-month descending trendline, as well as below its 50 & 100 sma. More recently the price has been consolidating around this lower level, trading in a holding pattern. The price action has been capped on the upper band by 6.40 and limited by the lower band of 6.33. The RSI is also neutral at 50. The price has fallen out of this lower band on two occasions falling to 6.32 its lowest level since May 2018. 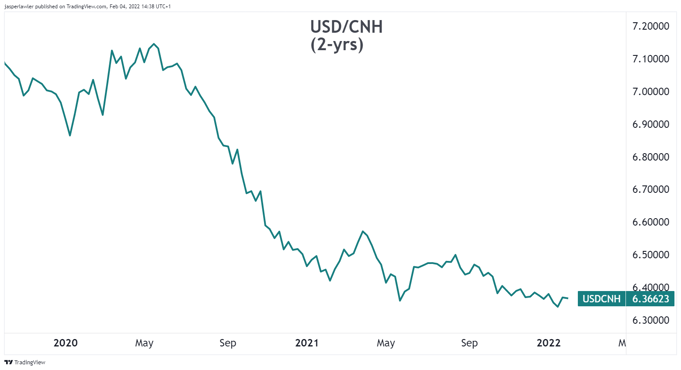 Economic growth in China is slowing. The latest Gross Domestic Product figures show that the world’s second-largest economy grew at its slowest clip in 18 months in the final quarter of 2021. GDP grew by 4% YoY, beating expectations, but this was still down from the 6.5% growth recorded in Q4 2020. The slowdown coincides with a property crunch, the Evergrande insolvency and ongoing restrictions to stem the spread of COVID.

China has a strict zero COVID policy and has implemented tough pandemic measures in order to stem the spread of the virus, which have inevitably also hurt the economy. Over recent weeks several large cities have imposed lockdown restrictions and businesses have been forced to stop trading due to staff shortages and even ports were closed. Output from China’s manufacturing sector slowed to its weakest level in just shy of two years and consumption has declined significantly.

These troubles come at a time when China is also grappling with a slowdown in its crucially important property sector, which has weighed on the broader economy. The sector is estimated to account for around 30% of total economic output. A crackdown from Beijing on highly leveraged real estate developers, including imposing debt limits contributed to Evergrande finally defaulting.

The crackdown on the property sector is just the latest in a series of moves to tighten regulation across different areas of the economy. Over the past two years, Beijing has targeted different areas of business from tech platforms to education providers and ride-hailing giant Didi in a series of campaigns. The Chinese government are justifying the moves as necessary to eliminate financial risks and improve wealth inequality. These crackdowns come as a warning sign that cracks are appearing across the economy.

In response to the slowing momentum in the economy, the PBOC has been cutting interest rates and easing monetary policy, at a time when the rest of the world is looking to hike. China has elevated inflation but in times past have prioritised growth over cooling prices, meaning the PBOC has scope to act and support the economy.

Why has the yuan traded sideways?

The sideways price action noted on the USD/CNH results from an even balance of bullish and bearish factors in combination with its non-free-floating nature, pegged vs the US dollar.

Chinese authorities have allowed the yuan to stay relatively strong for now but a changing economic situation can easily change that.

What’s next for the USD/CNH exchange rate?

USD/CNH has shrugged off negative sentiment surrounding the Chinese economy. Even as concerns swirled over the health of the Chinese economy the yuan strengthened 1.6% against the US dollar in the last six months of 2021. With the slowdown in China taking place now, there is no sign that the currency market is pricing it in, suggesting it could be short-lived.

Even amid a slowing economy, the Chinese yuan can stay strong supported by its massive current account surplus. Chinese exports jumped 30% across 2021 to $3.36 trillion thanks to booming global demand amid the pandemic’s shift to goods from services. Surging exports helped the trade surplus reach a record high. A trade surplus represents a net inflow of the domestic currency from abroad. High demand for goods equates to high demand for the currency. In addition to the record trade surplus, continued foreign buying of Chinese assets, particularly RMB bonds could have helped towards the strong performance of the currency.

While a very dovish monetary policy could detract carry traders from holding the yuan, for now the nominal yield on yuan-based debt is higher than elsewhere in the world. That means the easing measures brought in by the central bank could support economic recovery, lifting risk sentiment and sparking demand for the currency.

Another outside possibility that could benefit the yuan is the removal of some US tariffs on Chinese goods.

The PBOC is adopting a supportive monetary policy and cutting interest rates in sharp contrast to the increasingly more hawkish Fed.

Whilst the PBOC is considering further rate cuts across the rest of the year, the Fed is expected to start hiking rates in March, with potentially four to five interest rate rises planned across the year. The latest Fed meeting at the end of January was more hawkish than expected and prompted fears of an overly aggressive Fed sending the US dollar index to a 19-month high.

The resilience of the yuan appears almost counterintuitive given the macro picture. Slowing Chinese growth, regulatory crackdowns, fears over the health of the property sector and central bank divergence. These factors point to USD/CNH strengthening. Yet the pair trades within a sideways channel around three and a half year lows. Surging exports, a record trade surplus, hopes of trade tariffs being removed, in addition to hopes of solid growth amid PBOC easing are keeping the yuan strong.