China's chip industry is growing faster than anywhere else in the world, after US sanctions against local champions, from Huawei to Hikvision, whetted the appetite for local manufacturers.

According to data compiled by Bloomberg, nineteen of the world's twenty fastest-growing chip companies over the past four quarters have come from China on average; this compares with less than half at the same time last year. This supercharged growth underscores how tensions between Washington and Beijing are transforming the $550 billion global semiconductor industry.

Last year, only eight of the world's twenty fastest growing chipmakers were Chinese. This year, nineteen of the twenty are from China.
Among them, C*Core increased its sales by 338% over the last four quarters, Cambricon's business grew by 144% and Triductor recorded solid growth of 136%.
Shanghai-based SMIC recently reported a 67% increase in quarterly sales, despite the Covid lockdown, outperforming much larger rivals such as GlobalFoundries Inc. and TSMC.
Shanghai Fullhan Microelectronics Co.'s revenues increased by an average of 37% due to strong demand for surveillance products. 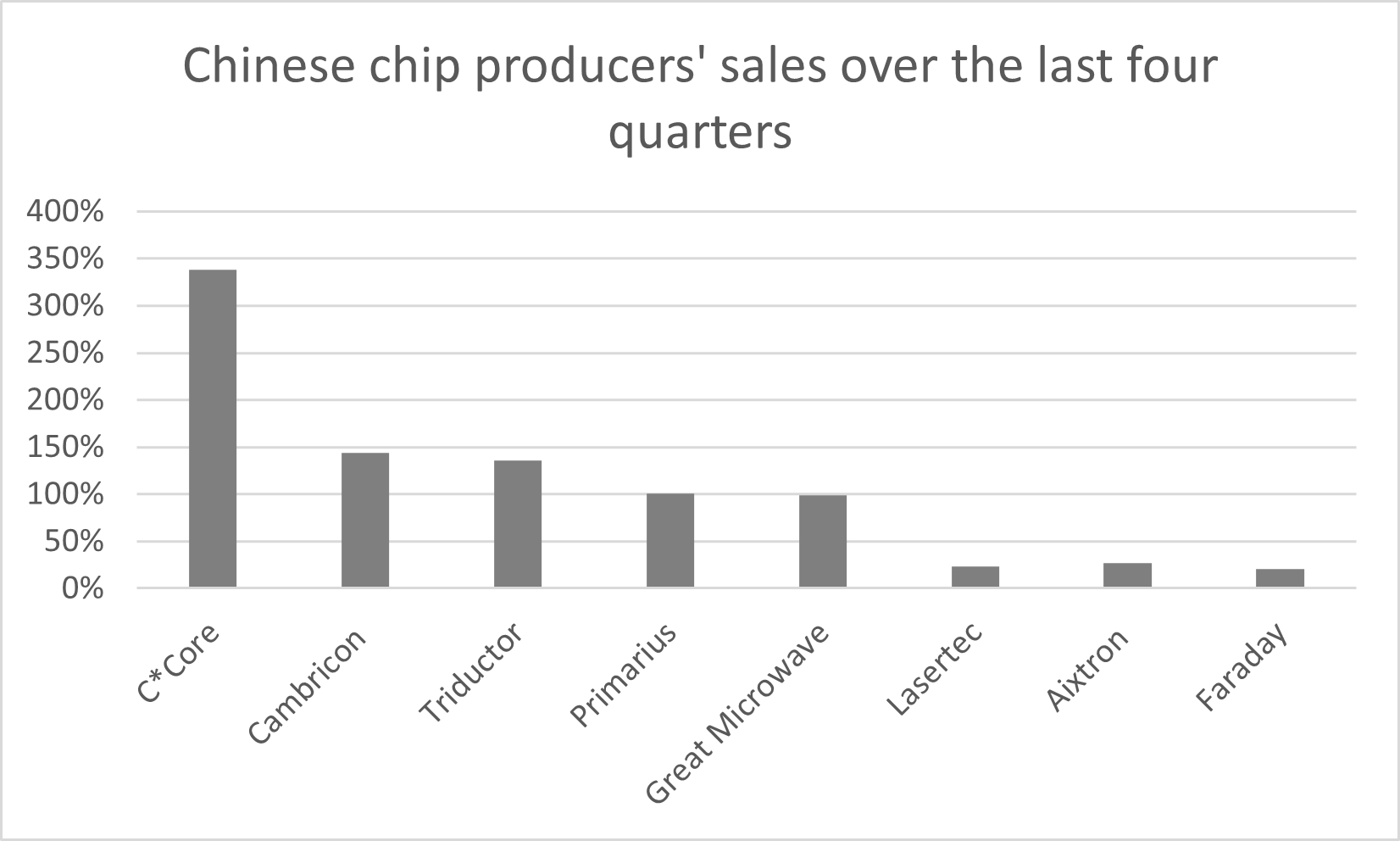 Fighting for a half-billion dollar industry

Chinese and American chipmakers are battling it out for a $550 billion global chip industry, which will continue to grow at a rapid pace as the semiconductor industry plays an outsized role in everything from defence to the advent of future technologies like AI (artificial intelligence) and autonomous cars.

But the impressive growth of Chinese chipmakers is not only due to huge global demand, but also to rising tensions between the US and China, which have led the US to restrict chip sales to Chinese companies like Huawei and Hikvision.

Moreover, the Chinese like to make things themselves for less money rather than importing from elsewhere. In this sense, the US restrictions have been a boon to Chinese chipmakers.
Now Beijing wants to get rid of about $430 billion worth of imported chips by 2021 and replace them with domestically produced Chinese chips.

The government should also give more weight to China's 'small giants', injecting billions of dollars of investment into the sector to support and fund national technology champions, and encourage 'buy Chinese' tactics to circumvent US sanctions.

One thing is for sure, the semiconductor industry is not done thriving with rapid digitisation, the promotion of Web3, metaverse and other technological developments, and Chinese producers want a larger share of the global market.

China's stubborn zero covid policy is of course a risk to the operations of Chinese companies. However, Shanghai-based chipmakers have been allowed to operate at near full speed as the latest restrictions hit many industries.

It is confirmation that if a sector has the blessing of the Chinese government, the stars align.

Then, the Russian demand

Chinese chipmakers are also well placed to sell their chips to Russians who have lost their main Western chip suppliers in a bid to slow the speed of technological development in Russia to slow the war in Ukraine.

In addition, the news that Russia, one of the world's largest suppliers of gases used to make semiconductors, has begun to limit exports to the West should further push US chipmakers into uncertainty, without affecting their Chinese counterparts.

Then, the divergence between a tighter Federal Reserve policy and a supportive Chinese policy could work in favour of Chinese chipmakers.

US chipmakers have been under decent selling pressure since the Fed announced its intention to raise interest rates and reduce the size of its balance sheet. US-based Nvidia missed its revenue projection by about $1.4bn due to slower demand for PCs and games last quarter.

To come to the rescue, the US government approved $52 billion in subsidies and incentives for US semiconductor manufacturing at the end of July. Will it be enough? To be seen.

Nvidia, the most popular US chipmaker of 2021, has rebounded as much as 38% since the beginning of July after losing more than 50% of its value since November 2021, while Intel, which should benefit more from subsidies, continues to bleed. 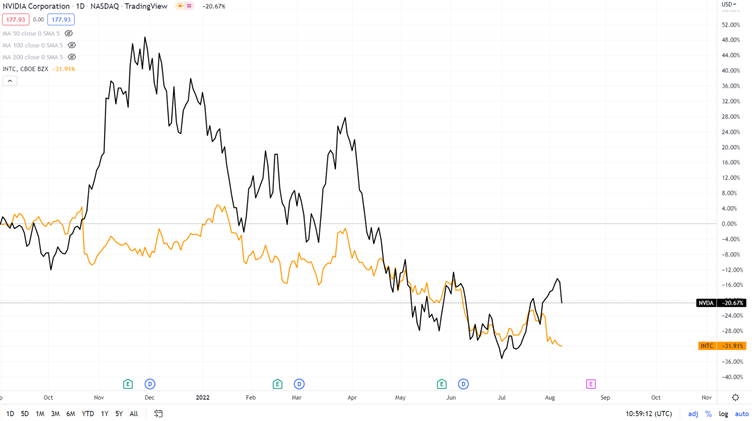 As with their US peers, the share prices of Chinese chipmakers have been hammered by the end-of-pandemic demand slowdown, and certainly the end of a speculative bubble. But Cambricon shares have gained nearly 55% since the April drop, while C*Core's share price has jumped nearly 130%. 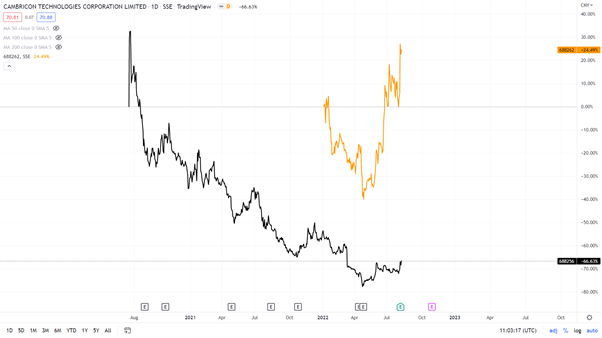