The S&P 500 Index is off to its worst start to a year since the Covid-fueled sell-off in March 2020. Many factors, notably the Federal Reserve’s tightening, are in focus. But what does history tells us?

Since November, the surge in market volatility has been, at least in part, a reflection of investors’ fears over the Federal Reserve's hawkish shift. Accelerating consumer prices have led the Fed to adopt a more aggressive tone as its key barometer of inflation, PCE, has jumped to decades-high. While uncertainty has risen and market participants’ views on the implications of rake hikes seem to vary, we decided to look at the history of rate hikes. Empirical data suggest that a transition to Fed tightening is often accompanied by increased equity market volatility, although such periods generally seem short-lived.

US stock markets and interest rate hikes have a strange relationship. If you try to find data showing a correlation between rising rates and falling markets, you might be disappointed. Although each time is different, stocks indeed have provided positive returns during Fed tightening cycles in recent decades.

Of course, in the short term, stocks are quite volatile and the response is mixed as higher rates can incentivize investors to sell assets and take profits, especially in times, like now, when there have been a few years of double-digit percentage returns. But that does not mean the bull run is over.

In fact, in the previous eight hiking cycles, the S&P 500 was higher 12 months after the first increase every single time and returned on average 10% (including dividends). The reason is that the Fed generally increases its benchmark rate because the economy is strong and profits are rising. The following chart displays nine past hiking cycles, with the green triangle indicating the beginning of the cycle, and the green lozenge plotting the 12-month evolution of the US ISM PMI, a proxy for the health of the economy and growth. Looking at the past, during each tightening phase, the ISM PMI rose on average during the following 12 months (except for in 2004), meaning rising rates are not necessarily a headwind for growth.

The good news is that usually, the damage to stock prices is already done when hiking starts as stock markets are forward-looking. Although for day traders, the next 3 to 6 months imply an increase in volatility, for buy-and-hold investors with a longer time horizon, the message is clear: Fed rate hikes are not a bad thing.

When trying to divine which way the market may move, it is important to keep in mind that rate hikes don’t hurt everyone equally. They can help certain sectors, like financials. If you are in the business of lending money, higher rates mean higher margins, as long as the slope of the yield curve is positive. Conversely, they can hurt sectors that are sensitive to rates, in particular those with large financing needs.

The technology sector saw wild swings this year on the prospect of faster rate increases as the high growth sector is considered, in general, more sensitive to rising rates, given a higher discount rate reduces the present value of its expected cash flow. But does empirical evidence support this hypothesis?

Considering the past four distinct rate hike cycles, it is important to note that tech stocks are typically among the best performing S&P 500 sectors during those cycles, with average gains of nearly 21%. One reason for their outperformance is their small debt financing needs, as lower debt ratios limit the impact on earnings from changes in interest rates. The technology industry has the lowest debt to capital ratio, standing in the mid-single digits compared to the market average (28%), as of January 2022. 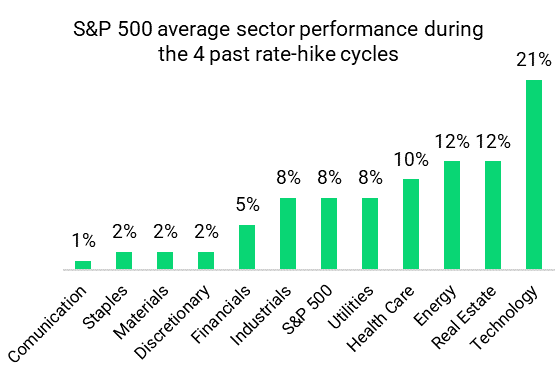 It is worth mentioning that in uncertain markets, investors also tend to look for stable companies with predictable cash flows and inflation-proof assets like commodities and commodity companies. As food and energy prices are inflating asset prices to record highs, the iPath Bloomberg Commodity ETF (DJP) has returned more than 24% since the beginning of this year, compared to a loss of nearly 7% for the S&P 500. In general, commodities have returns that are independent of stock and bond markets and therefore help lower the risk of a portfolio.

Many investors worry that this hiking cycle may be more complicated than previous ones as the surge in commodity (in particular oil) prices because of the war in Ukraine is threatening global growth. Clearly focusing on a single variable would provide limited predictive power, but if oil prices stay at these levels, this will have a negative impact on global growth. The International Monetary Fund has already revised world growth lower multiple times over the past six months, with analysts expecting it now to fall near 3%. In the past, oil shocks preceded economic downturns in the mid-1970s, early 1980s, and early 1990s, periods during which it was the main global source of energy. However, this time around, it is not clear, making the Fed face a tricky dilemma. 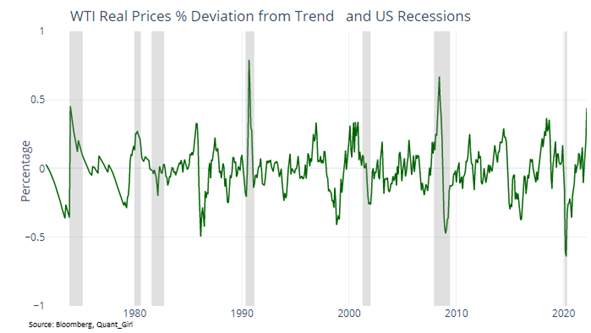 Arguably, rising interest rates could impact the pricing of stocks and thus contribute to short-term market turbulence. However, over the longer-term (12 months), there is no empirical evidence suggesting that the Fed tightening jeopardizes equity market performance. And while high volatility in the commodity (more importantly energy) could present growth headwinds, this is a factor that is likely already priced in by investors.