The fight against climate change and government efforts to move towards green energy sources have brought green hydrogen technologies to the forefront.

The war in Ukraine and Western efforts to accelerate decarbonisation have left the fossil fuel industry no choice but to adopt a greener roadmap. For example, the world's major oil companies are planning large-scale investments that would make green hydrogen a business of the future.

BP announced in mid-June that it is acquiring a 40.5% stake in the Asian Renewable Energy Hub (AREH), which has the potential to become one of the world's largest renewable energy and green hydrogen hubs.

AREH, which operates in the Pilbara region of Western Australia, intends to supply renewable energy to local customers in the world's largest mining region and also to produce green hydrogen and green ammonia for the Australian domestic market and export to major international users, starting with Asia Pacific.

According to BP's executive vice president, AREH "truly reflects what integrated energy is all about - it combines solar and onshore wind power with hydrogen production to transform sectors and regions". BP sees AREH as a fundamental project for the company that will help its customers and partners meet their net zero commitments.

The project is expected to make a long-term contribution to clean energy security in Asia Pacific, including helping energy-intensive countries such as South Korea and Japan to decarbonise and meet their low-emissions targets.

When fully developed, the AREH will provide significant net renewable generation capacity for BP: an important step towards BP's strategic goal of capturing a 10% share of the world's major hydrogen markets and becoming a global player in the renewable energy market. 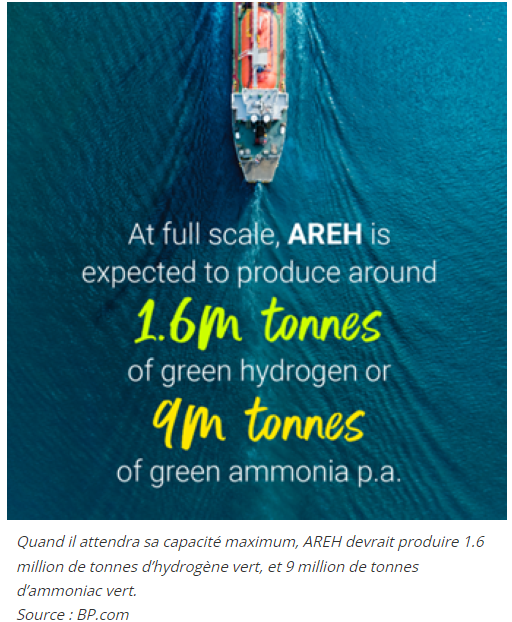 The development of green technologies is nothing new for oil companies. They are investing billions of dollars to generate large amounts of renewable electricity and convert it into clean chemicals or fuels that can then be shipped around the world.

Thus, green hydrogen and green ammonia will certainly be the future of the energy industry. However, the oil giants are often criticised for making a big bet on a technology that is not yet approved and may not reach its potential, even in the long term.

But oil companies have no choice. Not migrating to green energy sources is a death sentence for an oil giant. Therefore, betting on renewable technologies is their only option for survival.

And today, the oil giants have the means to do so. Oil prices have soared since the beginning of 2021, jumping 175% thanks to strong post-pandemic demand and weakened production. The war in Ukraine and sanctions against Russian oil have helped push oil prices to high levels, boosting oil companies' revenues and profits for months.

The oil rally will finance the green revolution

Even with soaring oil prices and explicit demand from governments, the world's oil giants are showing a clear reluctance to increase their refining capacity. This is a natural reaction to governments' efforts to reduce and even eradicate the use of fossil fuels in the long term.

Investing in future renewable energy sources seems, therefore, to be a better option for the fossil fuel giants, because these companies are playing for their future right here, right now. And because they can afford it, there is no better time for the oil giants to invest in the green revolution. Rising demand post-pandemic, the expected reopening of China and limited global supply should sustain the rally in oil prices and continue to fill the coffers of Big Oil.

BP, for example, has set itself the ambition of becoming a net-zero company by 2050 or earlier, and helping the world achieve net-zero consumption. France's Total Energies has joined Indian billionaire Gautam Adani's conglomerate in a venture that aims to invest up to $50 billion over the next ten years in green hydrogen. US-based Chevron has announced it is ready to spend billions on a blend of green and blue hydrogen, which uses a chemical reaction to separate natural gas and capture and store carbon dioxide.

And it is only a matter of time before Shell launches its own hydrogen mega-project. Its vice-president Paul Bogers said Shell is looking for a location where there are sufficient wind and solar resources for a large-scale project. He added that the development of green technology is certainly more suited to companies with deep pockets rather than start-ups.