Slower Chinese growth is worrying, but the e-scooter market tells another story. This short take on the industry will shed light on regulation, competition, and headwinds.

Competition is rough and it’s highlighted by the falling number of manufacturers since 2009 due to two things: market consolidation, and consumer demand seeking higher quality. Naturally, what comes next is textbook economics— tighter regulations over product safety standards that can lead to the dominance of a few large-scale players who price out smaller manufacturers.

On the supply side, the past two years have largely been driven by regulatory factors. First, regulators have pushed for lithium-ion powered batteries because of their ecological benefits compared to broadly used lead-acid batteries. Second, manufacturers now need sign-off before selling new models. These approvals require certain technical specifications, which smaller firms now have a hard time meeting, and lastly, regulators have clamped down on VAT evasions, thus squeezing out ‘’cheaters’’.

Since 2019, the new national standard for lithium-ion batteries has helped top brands sell more units. This is because the lighter lithium-ion batteries have translated into a crescendo of demand from non-motor licensed consumers who are allowed to ride freely—more regulation in this market has led to more business activity albeit increasingly concentrated between four players. Furthermore, the pandemic has also led to a major switch in commuting patterns from public transport to private mobility. All in all, the demand backdrop is healthy.

China is the world’s largest electric two-wheeler market because of adoption rates and lithium-ion batteries. With 300 million units in operation, and 90 million combustion engines ready to be replaced in the coming years, consulting firm Frost & Sullivan suggests that 50 million units will be sold in 2021 year alone. Their estimates for 2023 also suggest a 50% increase in sales to 75 million units, and a sales CAGR of 12.5% over the next four years.

Bifurcating one more degree into lithium-ion battery models only, things look even brighter. The adoption rate of such models is high in China in part because most e-scooters are powered by lead-acid. Since lithium-ion is the future, the last three years have seen a 30% pick-up in adoption for those models. In conjunction with new legislation pushing for lithium-ion, sales CAGR could be closer to 23% over the next four years. 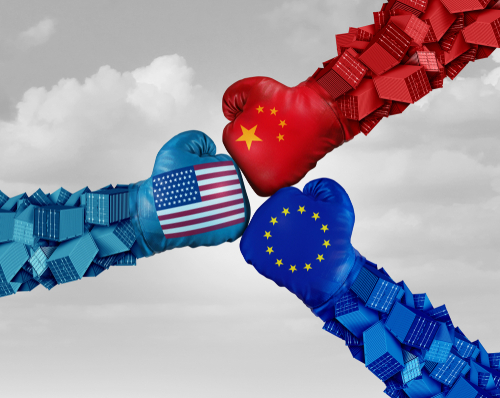 The fastest growing e-scooters sub-market is high-end e-scooters, but since Chinese firms face a relatively poor consumer at home they hope to expand abroad in Europe and the US. But exporting their units is expensive. While highly priced at home, top-tier Chinese lithium-ion e-scooters are considered mid-level in Western countries. This is true on paper, but factoring in current tariffs makes selling abroad increasingly hard for Chinese manufacturers. In other words, international expansion would help improve sales, but the current name of the game is to fight for more domestic market share.

In Europe, the EU imposes duties on Chinese e-bikes of 45% and e-motorcycles of 6% to protect its already- competitive domestic industry. Europe has a small number of e-scooter manufacturers, which would be hurt by the entry of Chinese makers who benefit from scale and a low- cost base. The US applies tariffs of 25% on e-scooters and 15% on battery packs with the added cost ultimately passed on to consumers. In Southeast Asia, tariffs on e-scooters are even higher at 40%. 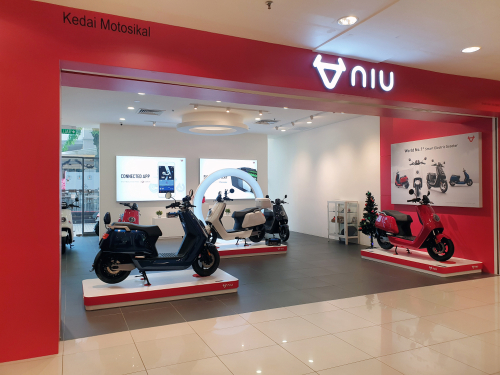 Now that the regulatory framework is starting to take shape, the market is consolidating. The four biggest players are Niu Technologies, Yadea, AIMA technologies, and Xinri. The market share has also been shaped by an evolving consumer appetite for better and higher quality carriers, a market segment Niu dominates. While Niu only has 1% market share, it dominates 70% of the top tier lithium-ion e-scooter sales, putting it at a unique strategic advantage considering regulatory changes. 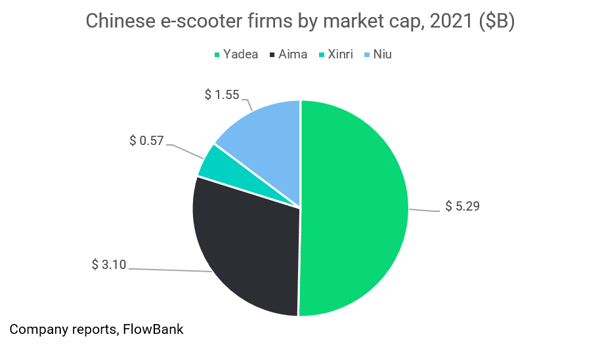 Chinese manufacturers sold 43 million units in 2020 and the industry leader is Yadea (ticker: 1585 HK) who concentrates sales on mid-range units (Rmb 2,000 to 3,500). The average wholesale prices by brands are showcased in the next graph with Niu a clear outlier due to their focus on the highest tier premium market segmentation.

Niu focuses on top-tier e-scooters and generates gross margins of 21% with a high-end series ranging between Rmb 6,000 ($943) and Rmb 20,299 ($3,200). While its peers command more market share by focusing on the affordable segments of the market, Niu has a high-quality brand offering which embraces the online and ‘’smart’’ elements that mobile apps, and e-commerce can offer consumers.

Niu recently entered the mass-medium segment in 2020 in to its top tier offerings with the added benefit of its quality first reputation. They hope to see a more sustained influx of cash from this move which could inspire competitors to explore the technological avenues Niu uses. Lead acid batteries are still however at the forefront of the industry and will be for some time so while the switch over to lithium-ion is coming in quickly, Niu is right to test the medium-mass market for the time being. Once lithium-ion batteries leak into mass production, Niu could be at an advantage as top tier provider.

Niu is uniquely positioned in its peer group as both financially healthy and a household name in the top tier segment. Financially speaking, the group has the highest margins than other players due to its highly priced market segment, but it also has some of the second highest ROIC and sales growth. Its high end product focus has led to a ROE in 2020 and 2021 of 18.9% and 20.7% respectively, overshadowing rivals. Lastly, 17% of its revenue in 2020 were derived from foreign markets.

This level of revenue and profit growth stemming from its niche top tier position, and a push towards lithium-ion powered e-scooters, by the authorities puts Niu in a stable position to handle future developments. The authorities’ effort to push lithium-ion batteries forward is forcing a multi-year replacement cycle away from lead-acid batteries and in Niu’s favor. Further industry consolidation, economies of scale and more demand from overseas could bolster margins at Niu.