NUBANK: Meteoric rise, but challenges ahead

Nubank is a Brazilian digital bank designed as an alternative to traditional banking. Its focus on the end user has paid off, attracting 48 million customers already, but will revenue follow?

The unicorn founded in 2013, is a true disrupter created to revolutionise the banking experience for Brazilians. Its IPO on December 8th raised $2.6 bn and proceeds will be used to fund growth ambitions in other markets (Mexico, Columbia, and Argentina). The huge investor interest led to shares opening 25% above offer price, translating to a market cap of $52 billion at one point. With the IPO oversubscribed by eight times, investors also flocked to the stock after opening.

Nubank invests heavily in branding and marketing to establish a strong digital presence. The fintech carefully nurtures its image as a ‘human’ size bank, describing itself as a “company made for people by people”. Transparency and security are pushed forward, but what is most standing out for a company of this size (3rd most valuable listed company in Brazil), is its start-up culture, and the language it uses. According to its about page, Nubank is for people who want to be “in control of their own life, have no time for mess or fine prints”, and seek simple, uncomplex ways of dealing with money. Financially, this translates into the company acquiring 80-90% of customers organically, resulting in a customer acquisition cost of just $5, of which 20% is paid marketing. The trendy fintech also leverages the power of influencers to solidify its message and grow its community. It documents its journey on its website and has built online tools such as the “NuCommunity” which goes beyond the standard “FAQ” to dialogue with customers.

Nu has over 47 million individual customers, and 1.1 million SMEs customers, covering approximately 28% of Brazil’s population ages 15 and above. It offers solutions to borrow, spend, save, invest, and protect one’s money. It positions itself as a platform business, attempting to create an ecosystem to serve customers all in one app. It grows through cross-selling by adding products and aggressively expanding geographically. Its business model is centred around growing customer lifetime value, and minimising complaints. Nubank has a net promoter score of 90, which is an exceptionally high score for customer satisfaction. The digital bank details on its website its strategy for customer service which can be summarised as “Anticipate, Solve, Care, Empower”. In other words, its high customer satisfaction has been key to quickly scaling to 48 million customers. Thanks to its lean cost structure and technology, Nubank’s cost to serve each customer is ~85% lower than the big banks in Brazil.

Nubank positions itself as providing client friendly digital solutions better than the local banks. Not only by cutting fees, but by attracting people that would otherwise remain unbanked. Between Brazil, Mexico, and Columbia, there are approximately 134 million unbanked adults. As a result, Nubank finds opportunities to reach out to the unbanked by providing low-cost and accessible banking resources. On top of that, the Brazilian market is shifting towards higher-yielding investment products, because of low interest rates and an improvement in financial literacy. Total addressable market (retail financial + marketplace services in Latam) by 2025 is predicted to reach $269billion (FT Partners).

Nubank is well capitalised and benefits from solid institutional backing. 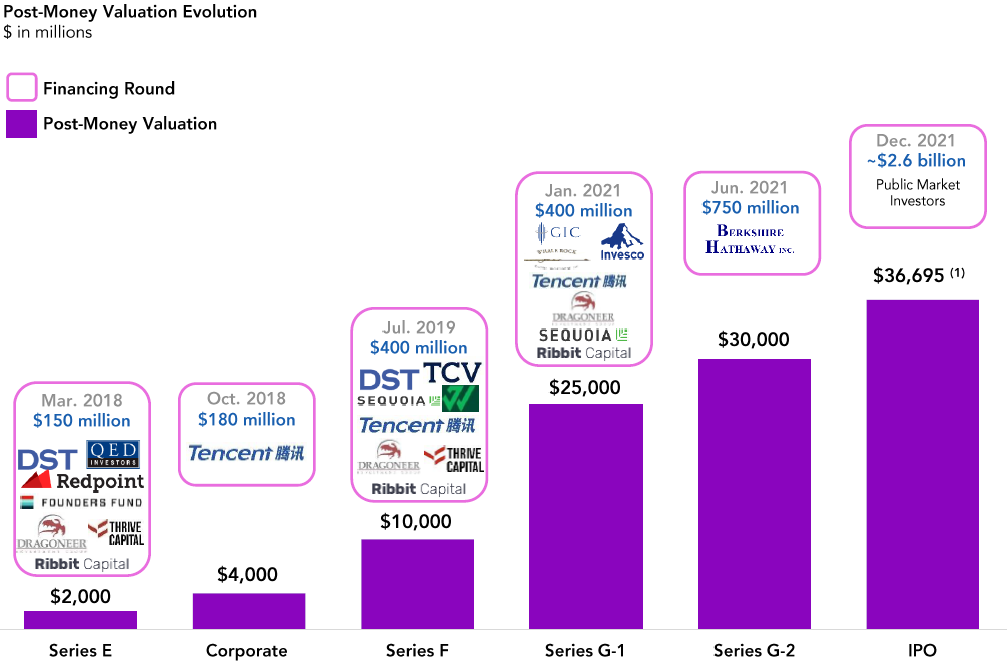 The IPO should also facilitate access to capital markets for further funding if needed. Large upfront investments are needed to build capabilities across multiple countries.

Nubank has grown its customer base from 6 million in 2018 to 48.1 million today, rapidly growing revenues and expanding gross margin close to 48%. So far, it is generating a loss as it is reinvesting into its growth. As it grows, its mission to offer a superior user experience and low fees may be challenged, as it could be giving up a lot of profitability.
For the time being Nubank is showing signs of leading the race to digital banking, but its success could attract more competition from other platform businesses and unsurprisingly traditional banks are also responding. For example, Itau is increasing digital sales and reducing fees, now offering cards and digital accounts for free.
Moreover, it’s still early on with a strategy that has been partly focused on winning the unbanked, with about 5.1 million people had access to a bank account or credit card for the time with Nubank. Now the challenge will be to increase the average revenue per customer, to demonstrate that customers are using Nubank for a significant share of their wallet. 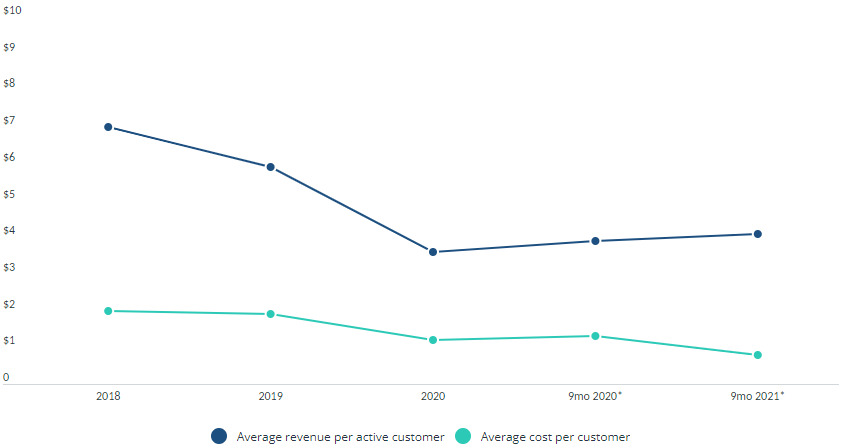 The fintech may also face more roadblocks as it adds customers and enlarges its offering, key to growing its profitability. In its IPO filing, Nubank said it is eyeing investments in sectors such as healthcare, e-commerce, and telecommunication, which is unsurprising as similar platform businesses have had similar strategies of leveraging their brand to enter new sectors (Mercadolibre, Sea limited, Grab, Tencent etc). However, such a strategy also increases the risk and most likely should further delay profitability, therefore potentially relying longer on investors for funding.

In the last round before the IPO, in June 2021, Berkshire Hathaway invested at a market cap of $30bn. The current market cap at ~USD10.9 per share is approximately $50bn, about 66% higher than June’s fundraising, and double the market cap since the January 2021 financing round.

*Revolut is still private. $33bn valuation is based on latest funding round. All figures in USD estimates.

Looking at the market cap to revenue ratio at 55.6x it is particularly high for Nubank, versus just 13.3x for Sofi in the US or just 1x for Itau in Brazil. Investors are clearly seeing a massive increase in revenue per customer in the years to come, to explain the current valuation. Institutional investors with access to shares pre-IPO such as Berkshire invested at a much lower valuation thus with such a massive price tag now, the room for error in i. growth projections, ii. execution and iii. investor appetite, may be slim.

The bottom line is that there is a long road ahead. Latam investments can be particularly volatile as has been the case with fintech StoneCo, which Berkshire also invested in a couple years ago. Looking at post-IPO stock performances this year, the combination of a rapid advance in market cap and high enthusiasm can act as a major headwind later on for the stock. In other words, there is a lot of pressure for the company to deliver on high growth expectations. Investors typically tolerate a low profitability for unicorns delivering superior growth, but in exchange expect growth to remain buoyant. Even with a secret sauce, maintaining a high growth rate could be difficult, and in turn risk disappointing investors.