After retreating in October, the US dollar could see renewed support from rising real yields and stronger US growth. Yes, supply chains and inflation continue to put a damper on the horizon, but we wouldn’t bet against the US consumer.

USD bulls line up at the gate

Stephen Jen’s dollar smile theory states that the US dollar moves with the state of the US economy. When the economy is strong, we tend to see a rising dollar. The same is true of more extreme risk aversion, where the dollar then rises as a haven.

The greenback is seeing net speculative bullish bets on the DXY, hitting a two-year high (see graph). While this can be seen as a contrarian indicator, historically, positive positions have gone hand in hand with flows into dollars. Moreover, the positioning does not appear overly crowded at this point, suggesting there is more room to run. As such, this could be a consensus is taking shape for a higher dollar ahead. 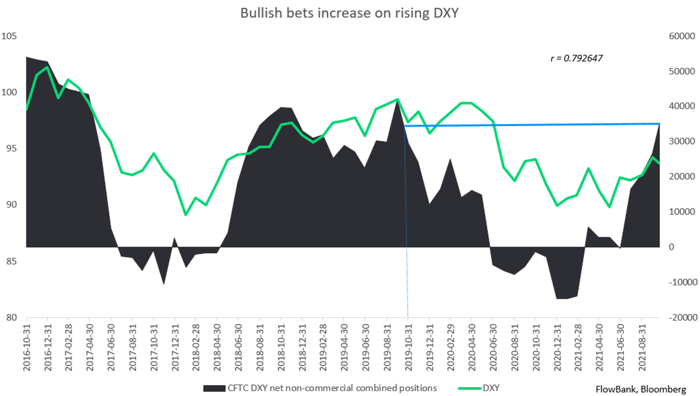 It is true that the US dollar has not seen its best weeks amid relative weakness against other currencies such as the Euro, and the Pound, but this can broadly be attributed to expectations of faster monetary policy tightening in the UK and more demand for cyclicals in Europe. Higher US Treasury yields have maintained some underlying support for the greenback.

Don’t bet against the US recovery

After dampened expectations for the Q3 earnings season due to the delta variant and ongoing supply chain disruptions, investors have welcomed better-than-expected results, with markets rising accordingly. Indeed, 82% of the S&P 500 companies that have reported so far have posted upside surprises, according to FactSet.

We have maintained that growth was only delayed by the delta variant wave over the summer, not derailed. After an annualized growth of 6.7% in Q2, we have seen upward revisions in consumption expenditures, exports, and imports according to the US Bureau of Economic Analysis. Coupled with the recent earnings releases, we remain optimistic about US growth prospects.

Two- and ten-year Treasury yields have increased to a 5-month high as investors continue betting on the recovery, which should push the dollar higher.

Federal Reserve Governor Waller said he expects inflation to moderate in 2022, and we do not expect the Fed to raise its benchmark before late 2022 at the earliest. Still, the latest run-up in energy prices could keep inflation higher for longer, the dollar should see support from higher real yields.

There is a historical correlation between the dollar and the Federal funds rate. Typically, when the Fed even considers hiking rates, the dollar reacts positively in anticipation. Rising rates are meant to rein in inflation, which often means a stronger dollar.

The latest FOMC minutes indicate that Fed members are ready to withdraw emergency stimulus, probably starting next month. The tapering process is expected to last into the middle of 2022 and members have mentioned that rate hikes would take time to materialize after that, suggesting late 2022 is the earliest estimate. Still, if prices remain high for too long, markets expectations could bring hike expectations forward or paint a more aggressive hiking path. The dollar’s recent upswing has in part been supported by the bottoming out of 2-year real yields, as investors price in rate hikes. 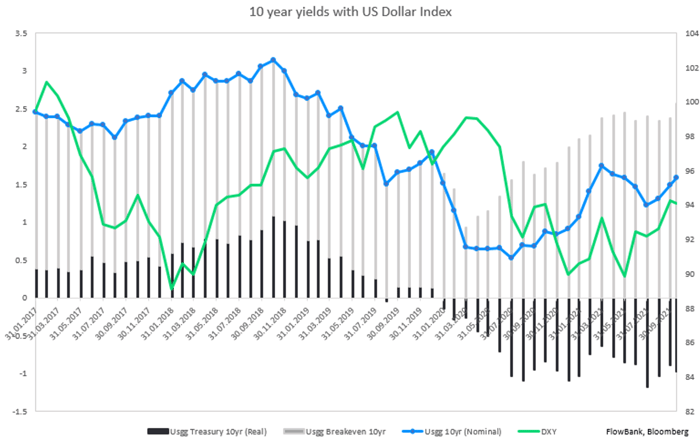 The USD against other majors

The euro has fluctuated a bit, but with a softer underlying trend – only recently (i.e., October) have we seen a bit of a reversal. However, the common currency remains close to its lowest level since July 2020 as the Fed tightening is expected to come faster than the ECB’s. The downside for the Euro now appears more limited, but we see little upside as tapering should prove supportive for the dollar.

In the UK, we have seen the 2-year Gilt yield surge far past the US 2-year yield, combined with a falling 1 month volatility in GBP trading, as the Bank of England appears closer to hiking. However, some Brexit pain is yet to emerge, which could limit GBP upside at some point. 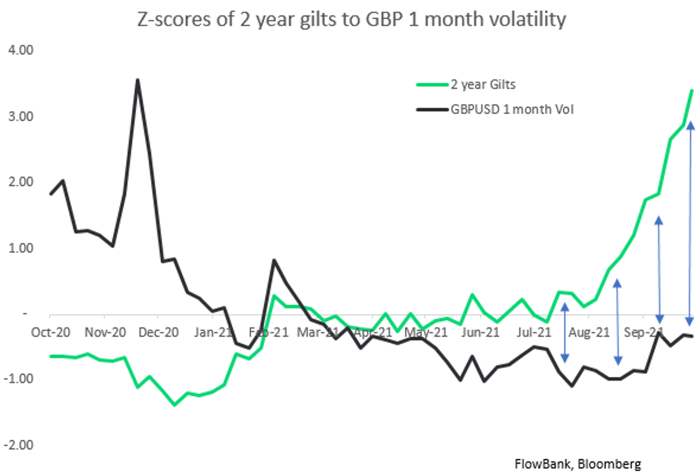 USDJPY continues to rise on signs that a US tapering will widen an already significant gap with the Bank of Japan’s perpetual zero interest rate policy. Expectations for new fiscal policies from the change in Prime Minister has also weakened the yen. Traders are also pointing fingers to the global surge in energy prices as a bane to the currency as oil-dependent Japan are forced to sell yen to buy oil and gas in foreign currencies.

In conclusion, it appears as though we could see a US Dollar continuing a northern run assuming of course, a scenario favorable to a US economic recovery. The current situation seems to indicate a bullish thesis beats a bearish one, but beware that many decisions from central banks have not yet been made with regards to tapering and rate hiking and those decision will play an outweighed role in the dollars medium term direction. A stagflation thesis coming to life would be the most destructive to the greenback because inflation hurts the dollar and low growth too. For further research, direct yourself to our latest words on stagflation.