A preview of the news, earnings, and economic data to expect in the week ahead. This week there is the all-important Fed meeting and monthly non-farm payrolls data - as well as interest rate decisions from the BOE and RBA.

As a reminder, some of the top market news of last week were:

5-day performance as of Monday November 1, 9am CET 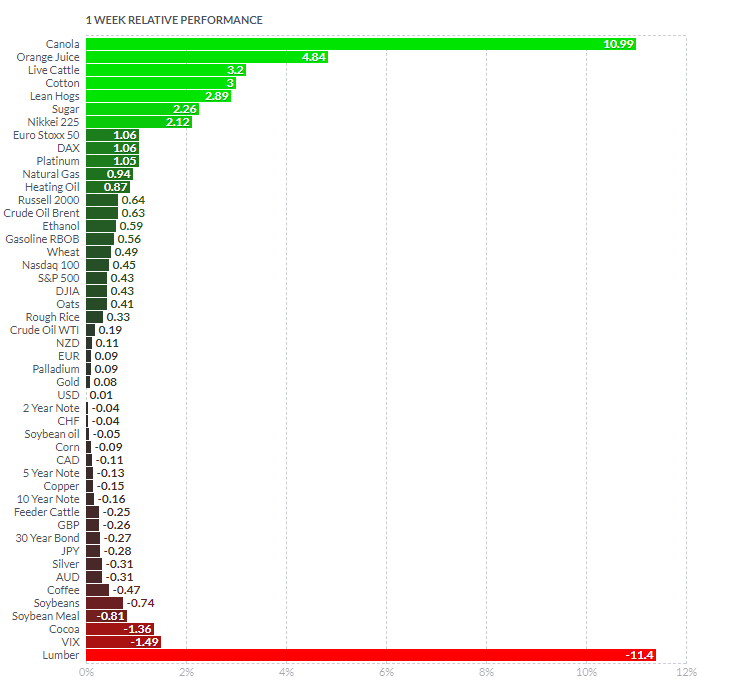 The Federal Reserve is finally set to announce it will reduce (taper!) its asset purchases this week - a major turning point away from its pandemic-era stimulus. The huge liquidity the Fed has pumped into the financial system has clearly made its way into financial assets. The question (and source of possible volatility) is how reliant markets have become on this liquidity - and what the affect of  'removing the punchbowl' - even slightly - will be.

Read our blog Gold & Silver Outlook: Time for the Classic Inflation Hedge? to understand the possible impact of the Fed on precious metals.

Will it be three for three of disappointing US jobs reports? The last two months have been atrocious when compared to the high expectations - and US GDP growth forecasts are being downgraded accordingly. This raises the spectre of stagflation - high inflation but rising unemployment. A negative jobs number appears unlikely - the backdrop for the US labour market is one of a slowing recovery constrained by supply shortages. However, should a negative NFP happen while inflation is topping expectations - even if it were a one-off - it could catch markets by surprise and cause a major risk-off moment.

OPEC and its allies including Russia will again decide how to respond to rising oil prices and falling oil inventories as demand remains strong. This time around there is pressure from US President Joe Biden - who has made a direct plea to the cartel to increase production. This might be a difference-maker- and the chance that OPEC speeds up its quota increases through the end of the year has risen.

The Bank of England looks set to join the small ranks of central banks who will have raised interest rates in 2021. It's not as hawkish as it sounds because the bank is still running its quantitative easing (QE) program.

The Reserve Bank of Australia made a surprise decison to taper its asset purchases in October and may well decide to do so again, in line with better backdrop for Australian industry thanks to higher commodity prices. However, the consensus among economists is the RBA stays on hold this month.

We are through most of the big tech earnings but many major American and international corporations are set to report Q3 numbers this week. The record highs in US stock indices would suggest investors are looking past disappointing results from behemoths Apple and Amazon. Instead the focus is on the strong earnings growth more broadly, especially among the cyclical sectors that can pass on higher costs with higher prices.