Carbon capture: why ESG investing and oil stocks are compatible

As more and more companies are pledging to reduce their carbon footprint, there is a new solution on the market: emulating trees in the air with a chemical reaction to capture carbon dioxide and ground it.

What is carbon capture?

With big companies pledging to be carbon-neutral, the Biden administration promising $2 trillion towards clean energy production, there is a new idea in town: instead of only tackling the source of the problem with renewable energy production methods, why not also diminish the impact of existing carbon dioxide sources that we still need until a complete transition?

If the start-up Single.Earth fights CO2 by protecting forests, a new kind of anti-CO2 weapon has come to life: carbon capture. Carbon capture is basically like a vacuum for CO2. With a chemical reaction, we can now emulate trees that suck the carbon dioxide in the air and compress it to then dig deep in the ground in the middle of rock formations, so that there is no way it can escape. We could even think of reusing it to create fuels, fertilizers or even building blocks.

Instead of reducing your emissions, you can now pay companies like Carbon Engineering to clean your mess for you. They are basically becoming the garbage men of big companies. It is not about reducing emissions but sucking them up with science. The impact of only one plant could cut as much as 250,000 automobiles worth of CO2.

The project is supported by the UN; they stated that the carbon capture, use and storage (CCUS) would allow countries to decarbonize and bridge the gap until the next generation clean energy technologies are discovered.

The Carbon Capture market is expected to grow to $3.5 billion by 2025 and companies like Exxon Mobil number it in the multi trillion dollars by 2040. 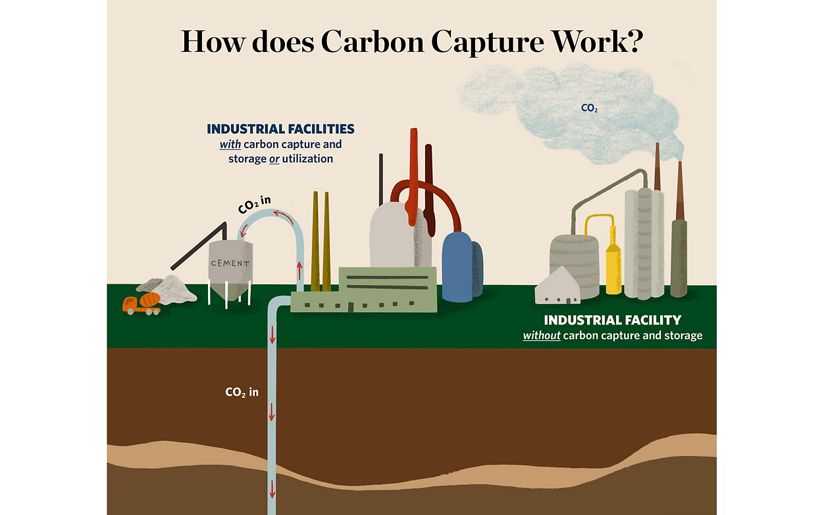 Who are the main players in the carbon capture industry?

Carbon Engineering is an honest company: their business plan is also their name. They are one of the first movers in the guilt economy, with a complete solution for companies to pay for carbon hunting.Shopify, not proud of sending you 10 packages of socks in the last 3 months, will be the first customer of Carbon Engineering’s CO2 capture solution, buying the removal of 10,000 tons of carbon dioxide in the air.

Aker Carbon Capture, Microsoft and Ørsted are also working hand in hand on a project to capture CO2 from Norwegian industrial capture sources. It comprises the transportation, receipt, and permanent storage of CO2 in a reservoir in the northern North Sea. Northern Lights should have the capacity to transport, inject and store 1.5 million tons of CO2 per year.

Despite new climatic constraints and increased pressure from both the state and the public Exxon Mobil is doubling down on its oil and gas production. However, far from burying its head in the sand, the oil giant is preparing for a low-carbon future by also investing massively in the carbon capture technology. The company announced a $3 billion effort towards low-carbon efforts and created a new business unit to commercialize this carbon capture in exchange for a ransom, as they estimate that it could soon turn into a $2 trillion market by 2040.

Are you telling me to invest in major oil companies to fight climate change?

Some major oil companies like BP and Shell have preferred to shift directly to renewables with wind and solar energy, but there are concerns regarding the profitability and viability of these projects, especially in the short term.

Of course, the easiest way to “clean” your portfolio from polluting companies would be not to invest in any CO2-emitting industry. But this idea is a little simplistic, and your noble action does little to solve the underlying issue. The best long-term solution is to engage with major oil companies and help them turn towards the right long-term solution.

Indeed, what companies like Exxon understood is that technology and innovation were the only ways to reduce the environmental impact of energy production, without causing energy prices to soar, which could condemn billions of people to poverty.

Stopping the production of oil and gas altogether might be the dream of green activists, but it would turn into a disaster for many, as the demand for it will not disappear overnight. What we need is a smooth yet directed solution towards cleaner energy. It is not about cutting the wings of oil giants, but about helping them making a swift transition to a more durable future. Combining carbon capture with renewables might be the solution to a cleaner means of production, and to turn large oil and gas companies into responsible, green companies. What are the risks and is the tech proven?

The tech seems to work well, bit one of the main obstacles is money. For Europe alone, a budget of €320 billion will be needed to achieve the CCUS deployment planned to 2050, with an additional €50 billion to transport infrastructure. A strong and undying political will be needed to carry through this massive project.

The United States, United Kingdom and Scandinavia are leading the way, but most smaller nations will need support for deployment.

There are about two dozen projects globally, but the technology is still impaired by high costs, and it seems that not enough thought was given towards the liabilities if the underground dioxide managed to somehow escape. Some even call it an (expensive) “trojan horse” by fossil fuel industries to keep their demand alive. The main argument behind this is that we ought to create processes that do not pollute in the first place.

Further research is constantly being carried out to the better the technology. Last week, a $100 million donation by FedEx – which also pledged carbon neutrality by 2040 – was given to Yale’s new Planetary Solutions Project to launch the Center For Natural Carbon Capture, which will focus on developing interdisciplinary solutions to reduce the amount of carbon in the atmosphere.

How to play it?