British pound slides on Brexit risk but investors are bullish

The British pound has dropped to its lowest against the dollar in a month on renewed fears of a no deal Brexit.

UK government has said it is preparing legislation that will ‘clarify’ some of the ambiguities from the UK’s Withdrawal Agreement with the European Union.

Losses in Sterling accelerated on the news that Sir Jonathan Jones, the head of the Government Legal Department would step down in a disagreement over the legislation.

The so-called ‘internal markets bill’ will specifically address trade between the UK and Northern Ireland and on state aid. The government has said the bill would only be enacted should trade talks between the EU and UK breakdown as a failsafe.

This has caused furious rebuke in some quarters of Europe and from pro-EU supports in the UK that the Boris Johnson government will break international law by undermining an international treaty.

As anybody who has been following along with Brexit since 2016 might be used to by now, UK and EU negotiations have come to ahead again.

The UK Prime Minister repeated on Monday that a deal should be in place by October 15 (just over one month away) or both sides should just ‘move on’ and that a no deal would be a ‘good outcome’ anyway.

Will a deal get done?

The lesson from the first three years of Brexit is that a deal can still be achieved last minute. In fact the EU is known to leave things to the last minute when concessions need to be made to get a deal over the line.

Negotiators will begin an eighth set of talks this week but there are not high expectations of anything other than another stalemate. The issue at hand is that the negotiators have been given mandates that are fundamentally incompatible. Negotiators have the job of working out the details of who gets what, but it is the politicians who set the negotiating terms who decide what kind of deal it will be.

If a breakthrough is to happen, it needs to be among EU and UK leaders. This is what happened in late 2019 when Boris Johnson met with Leo Varadkar at Thornton Manor where Varadkar later said he saw a “pathway to a deal.”

Does Brexit still matter for GBP?

The drop in Sterling over the past couple of days have erased its gains over the past month. That would suggest Brexit still matters. Still, with the EU and UK having been on the cusp of no deal on so many previous occasions; seasoned investors may be weary of selling down Sterling too early. 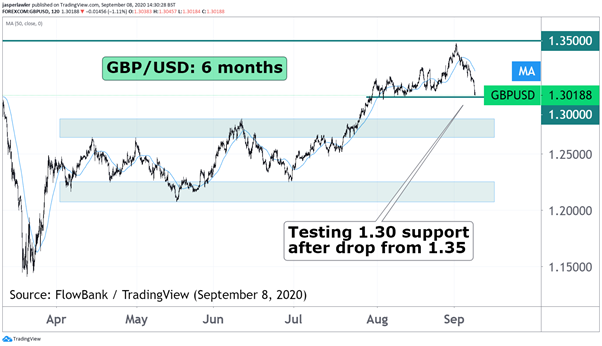 Positioning data in futures and options markets show that speculators have turned net bullish on Sterling and by the most in over two-years. 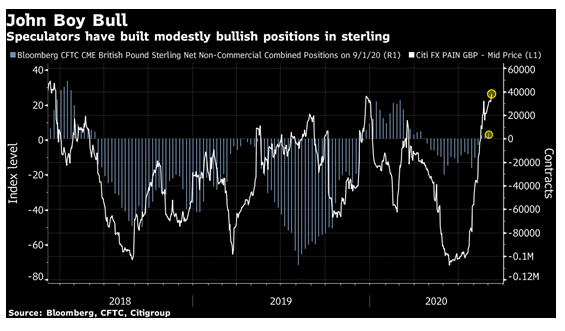 The contrarian view of the position data might suggest bulls are ‘overstretched’ and that markets are being ‘complacent’ about Brexit risks. The direct interpretation of the data is that the view in markets on the pound is positive, despite the looming end-of-year Brexit risks.

Zooming out to a longer term picture, the pound has stabilised above 1.20 but continues to print lower highs. 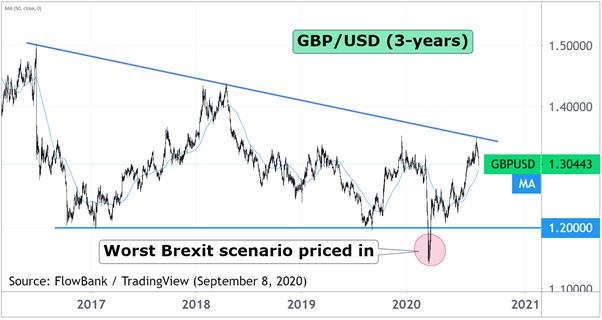 Should no FTA be achieved by October 15 and the UK walks away from the negotiations to prepare the nation for no deal, then some negative reaction in Sterling is to be expected. The bigger question is whether another material drop below 1.20 or even 1.15 is on the cards should such an event occur.