For fans of the British Royal Family, it’s more than likely you’re aware of what’s special about the coming week. Brits will enjoy an extended bank holiday weekend and it’s the reason for this double-length break that is special; the Queen’s platinum jubilee celebrations.

Following on this platinum theme, we thought it an apt opportunity to take a look at the platinum market.

It’s an interesting commodity in that, while it is technically classed as a precious metal (along with silver and gold), it is also widely used in the industrial sector. Platinum is a key component in the automotive vehicle maker sector, used in catalytic converters, but is also widely used in medical and scientific laboratory equipment, electrical components in the tech sector as well as in dentistry equipment and jewellery. Despite its broad range of uses, platinum is actually one of the rarest metals in the world, making its supply/demand dynamics all the more interesting from a trading perspective.

What’s been happening to platinum prices?

As with other metals, it’s been an incredibly volatile year for the platinum market. Looking at the futures market, platinum prices were seen rallying sharply initially, starting the year with a roughly 30% rally across Q1. However, we then saw platinum prices reversing just as sharply, plunging by over 25%, taking prices negative on the year. Currently, the price is sitting at the foot of that last major decline. 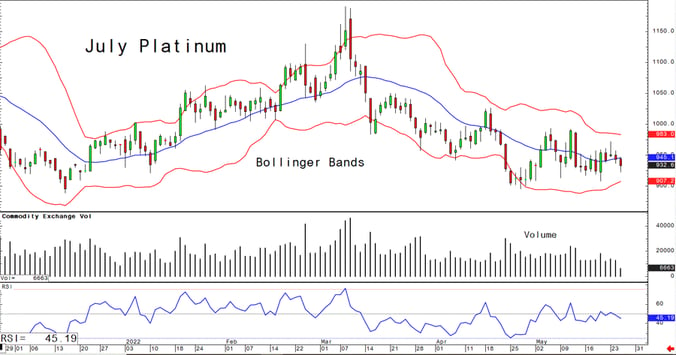 So, what’s been causing these wild fluctuations in the platinum market and where are prices likely to head from here?

Platinum prices were driven higher at the start of the year by news of Russia invading Ukraine. With almost 20% of the world’s platinum being mined in Russia, the country is the second-largest global producer behind South Africa.

The disruption caused by the conflict, as well as the sanctions imposed on Russia by the West, caused a severe uptick in prices as traders anticipated heavily-reduced supply. However, as the initial reaction to news of the invasion faded, so too did the moves in platinum. This was a dynamic we observed across the commodities complex since March.

The reversal lower in platinum was then exacerbated by the uptick in Fed tightening expectations as we moved through the end of Q1 and into Q2. The .25% Fed rate hike in March was accompanied by a more hawkish outlook from the Fed, which sent the USD higher. The rally in USD was amplified over Q2 as the Fed turned increasingly hawkish in response to soaring inflation, leading to a .5% hike in May and upward revisions to the Fed’s rates outlook for the year. With USD higher and inflation eating away at purchasing power, platinum prices sank lower as demand ebbed away.

Alongside Fed tightening action, we’ve also seen a host of other central banks embarking on post-pandemic policy normalisation. The combination of tighter monetary conditions and excessive global inflation gave way to rising concerns over a coming global slowdown. With most global economies gripped by a cost-of-living crisis, exacerbated by the need for central bank tightening to help tame inflation, fears of a recession are now dampening the demand outlook in platinum, as with other commodities.

Recently, these recessionary fears became more prominent as concerns over a slowdown in China added to the bear market in commodities. With whole regions of China, including Shanghai, back under fresh lockdowns, there was a massive slowdown in activity which is expected to have lingering effects over the coming quarters as the economy opens back up. Given China’s status as the largest global consumer of platinum, these events had had a big impact on the demand outlook for platinum.

Looking ahead, the outlook for platinum looks skewed towards further downside given the seeming inevitability of further central bank tightening and the risks of a global slowdown. With inflation still at elevated levels and expected to persist over most of this year, tighter financial conditions and continued supply restraints linked to COVID and the ongoing violence in Ukraine, platinum prices can easily fall further into the end of the year.