Financials tend to be supported by strong earnings, economic recovery, and rising rates, which appear to be lined up. But is there more to the story?

Earnings right now are very strong. Strong earnings tend to help financials because, as the cycle advances, financials lend more. Out of the S&P 500 component stocks, 445 have reported so far, with 81% beating estimates. Year-over-year revenue growth for last quarter was 17.3% for the blue-chip index which is well above the 5-year mean of 6%, and 10-year mean of 3.5%.

Investor confidence and a strong economy is translating well for financials. Estimates currently suggest that revenue growth rates this quarter were the second highest since 2008. Every sector of the S&P 500 is seeing year-over-year revenue growth, with Financials seeing 12.2%. Financials stock performance returned 47.33%, second only to the Energy sector’s 74.89% return. 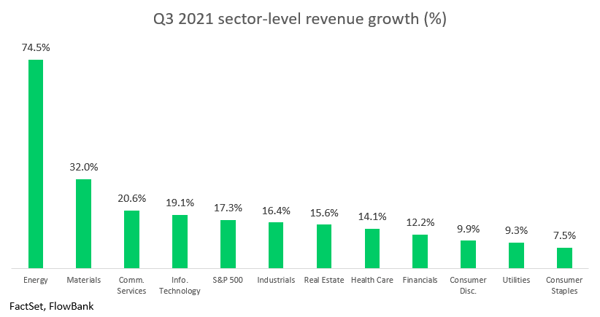 The growth backdrop is solid, and the recovery materializing leads to further investor confidence. Demand for goods is strengthening, and consumers are sitting on trillions of excess savings, especially in the US. Growth in the final three months of 2021 could pick up 5% (annualized) for 6% for the year, as unemployment continues to decline at a historically rapid pace.

Biden also won his $1T infrastructure bill this week, and he continues to plan for a re-shoring cycle. Therefore, financials who focus on domestic US businesses could be net beneficiaries going forward. Financials with less than 15% of sales coming from foreign operations over more internationally diluted financials make sense in our current context.

Financials would benefit from rising rates because net interest margins would improve. Current labor shortages will likely continue for the coming quarters but should eventually fade. However, if labour markets improve faster, the Fed may be pushed to act sooner. Today, the Fed is facing a double edge sword: remain dovish to support a ‘’broad and inclusive’’ recovery or be hawkish to tackle inflation. The recent jobs report showed an acceleration in hiring, but labor force participation was unchanged.

If the 10-year Treasury yield continues to rise, financials should benefit, especially those with pricing power who can pass on costs to consumers. Consider therefore inflation-protected yield as real rates remain below 0% despite a rising 10-year yield, those financials who pay dividends could be especially interesting picks.

While the current picture appears supportive, disruptive technology is the fourth factor impacting financials today. The premise that people tend not to change banks is changing, which means financials need to adapt to an evolving backdrop. Leading financials do not shy away from unbundling traditional products--they strive to offer B2B, open banking, API services, and third-party partnerships. This unbundling process is called a ‘’non-linear’’ business model.

Right now, we see big banks, lenders, insurance, and brokerage firms posting robust revenue and profit growth. Rates are low, but we continue to see record earnings, strong investor confidence, and robust profit margin growth. Financials that pay dividends are interesting in our current rates climate, and so are those that are highly exposed to the US market. The fourth factor to consider is how well a firm adapts to technological innovation—firms that go beyond digital, and into the foray of ‘’non-linear’’ models, could thrive.