What valuations are telling us

Earnings are beating expectations, indices are setting new highs, and there are tech IPOs everywhere. Are valuation levels speculative, or is this just the new normal?

Markets keep hitting record highs. The equity narrative has been broadly bullish, but keep in mind that the S&P 500 index is trading north of 20X forward earnings, the highest level since the Tech Bubble. However, today’s economic context is different from that of the late 1990s. Lessons can be learned from the past, but we hesitate to make comparisons, here’s why:

First off, price to sales metrics show two different worlds between the dot com bubble and today. Looking at the frontline runners of each era, it is clear that sales have improved greatly as a proportion of stock price. Remember that a large part of the tech bubble was that people were buying companies with poor revenues, and some firms even went public with pre-revenue balance sheets. Higher price to sales seen then compared to today’s much lower figures, indicate tech companies today have healthier cashflow statements. Enterprise value to EBITDA ratios are also much lower than before, suggesting companies are seeing relatively more money coming in than before.

Big Tech may be richly valued, but less so than in 2018. In fact, spreads have shown that P/E ratios of FANG+ are lower now. Just look at the spreads between the S&P500 and the FANG+ Index P/E ratios in the following graph. What we see is that in early 2018, big tech valuations were much more expensive than today. The premium investors were willing to pay in 2018 neared 53X. Today? 16X. 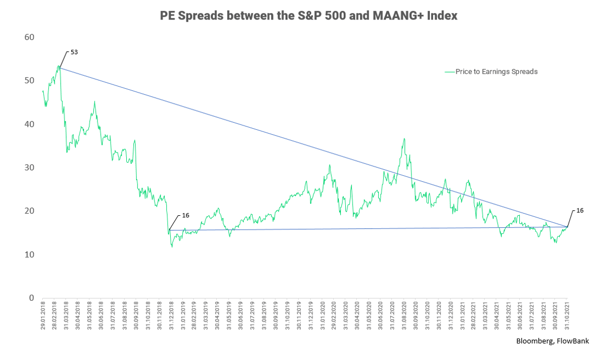 Because rates have stayed low since the start of the pandemic, it has been easier for private companies to go public, and for lenders to underwrite SPAC and direct listings. A surge in technology IPOs ensued, and newspaper titles reminiscent of an early 2000s tech bubble soon became a regular occurrence. Valuations are high now because there has been a huge injection of capital fueling growth, and the switch in demand towards technology products from households and retail traders have further bolstered levels upwards.

Pete Flint, founder of Trulia.com, a publicly traded real estate application which merged with Zillow in 2015, says that today’s startup valuations are high but reasonably so because of two unique factors. First, there is an abundance of VC money as institutional capital seeks better returns than what bond markets offer. Second, there is a bedrock of talent joining startups now, unlike during the dot com era.

As the global economy continues to recover, the Fed is about to taper is QE program. When the Fed tapered in 2013, yields rose, resulting in Value stocks outperforming, especially against Growth. This was based on higher yields that disproportionately disadvantage the outlook of Growth companies’ cash flow. This does not mean that Growth will necessarily fall, but rather, that Value has further catch-up potential. 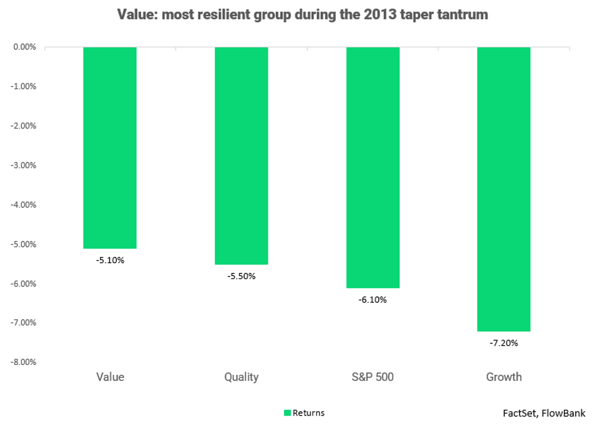 In 2013, key valuation metrics such as forward P/E, price-to-sales and EV/EBITDA were less volatile and less hurtful to Value than Growth stocks. A hawkish environment tends to hinder Growth valuations, and periods of above average interest rates volatility tend to favor Value. But how much of this is already priced in? 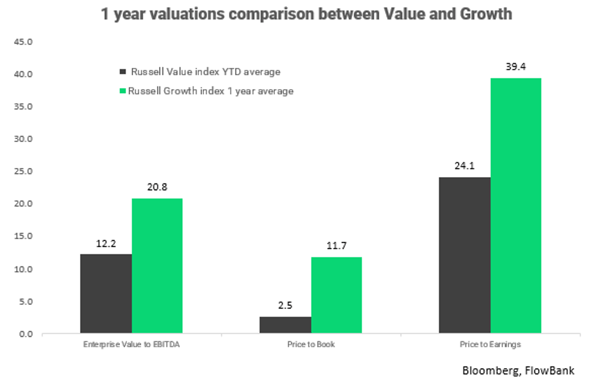 Assuming a recovery scenario, we could see a shift from goods to services, and more infrastructure re-shoring in the US, making small caps net beneficiaries. Interestingly, we see that small cap valuations today are relatively inexpensive compared to their large cap counterparts. Most mid cap sectors are trading at a premium against small cap, except for two sectors.

Financials and materials look broadly inexpensive across different capitalizations, and could benefit from macros trends. On paper, we think financials rank at the top in terms of trade value, if we look at return, and ramp up potential. This is because historically speaking, banks and financials do well in recovering economies. When consumers have more money to spend, banks can originate more loans, see stronger capital returns, and see credit performances improve. However, while we see upside potential for now, banks might not manage to bridge the whole gap.

Today’s economic context is different from the 1990s dot com bubble, and valuations should be studied under this premise. Value stocks and small caps look rather inexpensive and tend to outperform during hawkish periods and ‘recovery’ phases. Yes, tech prices are high but mainly because of freshly injected capital. Valuation metrics are elevated, but the spread between FANG+ and SPX has fallen, and higher tech startup valuations are driven by a glut of US bond yield frustrated VC money, and startup talent, not just speculation.